One corollary to the changes in the American press in Washington is the rise of a new foreign press.

In pure numbers, few areas of the Washington press corps have experienced greater growth than the international media. In 1968, Washington’s Foreign Press Center opened to serve the estimated 160 foreign correspondents reporting from the nation’s capital. It is unclear just how many different organizations they represented or from how many countries they came, but there was little doubt that by the mid-1990s their numbers had grown substantially. A 1994 United States Information Agency directory listed 507 foreign news organizations from 79 nations and territories working from Washington. 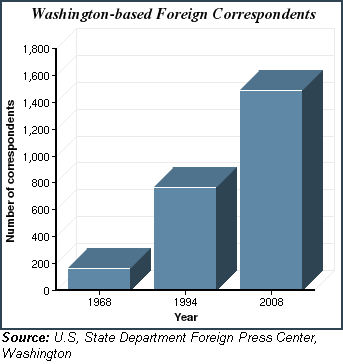 The Foreign Press Centers database currently lists 796 media outlets from 113 countries and territories represented by at least one correspondent in Washington. Much of the growth of recent years come with an influx of media from Asia, especially China, the Middle East and Africa. All are regions where America’s policies and actions have taken on increased importance over the past decade. Last October, 1,490 foreign correspondents were accredited to the FPC in Washington—roughly 40% of all foreign journalists accredited nationally.

This growth has been spurred by a variety of factors, including technological advances that make communication with home offices continents away cheaper, faster and easier and by the lengthening the shadow cast by America’s impact on issues from trade policy and military alliances to pop music and climate change. The shock of the 9/11 terrorist attacks on New York and Washington coupled with the controversial nature of the Bush administration’s responses in the years since also have raised interest.

The invasions of Afghanistan and Iraq spurred visible growth among Third World outlets, especially those from the Middle East, including newly-influential satellite television outlets such as Qatar-based al-Jazeera and Dubai-headquartered al-Arabiya, which broadcast across the entire region free of state controls. Al-Jazeera’s English-language service, which opened its Washington bureau in 2006, had 86 staff members accredited to cover the last Congress. The station’s Arabic service had 19 accredited staff members.

“The American story is so important,” said British Broadcasting Corp., bureau chief Andrew Steele. “It’s front and center of every country’s international news report—especially with the [recent general] election and what comes after that.”

The BBC maintains one of the largest mainstream media news bureaus in the capital, with a staff of about 50—roughly a third larger than it was four years ago. The BBC today also produces several new programs from Washington shaped specifically for American audiences, including World News America and a 24-hour cable channel that mixes news with lifestyle programming.

According to State Department employees who work with the foreign media, the majority of foreign correspondents are full-time employees of the organization they represent, although there also are many stringers or part-time correspondents. Collectively, they tend to be more sophisticated, better educated, and more aware of the complexities of the United States and, thanks to expansions of freedom globally, they are freer to report those complexities.

Certainly there’s more than enough to keep foreign correspondents busy. A Senate Agricultural Committee hearing on beef that a decade ago might have drawn the interest of a couple of American reporters, today can bring as many as 20 because of the international interest in one of America’s biggest exports.

In January 2007, State Department spokesman Sean McCormack began holding off-camera, informal briefings called “gaggles” daily at 10 AM Eastern time, enabling correspondents serving outlets in Europe, Asia, Africa and the Middle East to update stories from the previous evening with fresh material before the end of their news cycle. The gaggle proved so successful that in September 2008, the State Department moved its routine daily on-camera press briefings forward by two hours—from 12:30 to 10:30 AM Eastern Standard time—a development that has helped position America’s message better within the global news cycle.

There were so many foreign reporters at the Democratic and Republican political conventions last summer in Denver and Minneapolis that they were set up with separate filing centers and provided their own briefings daily, as well as preparatory briefings in Washington prior to the convention on such issues as battleground states, the Electoral College and the variety of voting machines used by different states.

Despite all this, the impact of the foreign media on Washington itself is difficult to measure and is likely marginal. The growth, while impressive, has tended to produce a broader rather than deeper coverage of events, with more media outlets from more countries seeking registration. Foreign journalists continue to struggle for access to key decision-makers and because of that rarely break exclusive stories, and their dispatches seem to have little impact on the rhythm the government’s business.

“Our access is improving but it’s still difficult,” said Steele, who said the BBC had tried for months without success for interviews with both main presidential candidates prior to the November election. “There’s much more recognition of foreign media in other capitals. Washington has a long, long way to go.”

In many ways, the situation of foreign correspondents in Washington constitutes the mirror image of conditions in other capitals, especially in the Developing World, where correspondents from American or European media outlets often find it easier to access the corridors of power than their domestic colleagues. To date, however, the real impact of this growing foreign media is not in the capital, but beyond America’s shores. The ability of these correspondents to explain events in Washington and set them within the prism of their own national and cultural interests constitutes an important change in the portrayal of U.S. government actions to the world. As recently as the mid-1990s, this news was provided mainly by American news agencies, CNN International or stories syndicated by groups like the New York Times Service or the Los Angeles Times-Washington Post Service.

This alters both what gets covered and how. Consider, for example, coverage on Feb. 5 from four different outlets.

The BBC’s World Service gave prominent Website display to a story from its Washington bureau on a Senate vote to soften a controversial "Buy American" clause in the economic stimulus package after warnings it might spark a trade war. No such story appeared on CNN International’s site, Fox News or MSNBC during this time period.

Instead, CNN International’s top Washington stories that day were on President Obama’s plan to expand the Office of Faith-Based Initiatives and his urgings for a quick passage of the economic stimulus package.

The Washington bureau of Al Jazeera’s English service was featuring yet another story. This was one much more controversial in the Arab world: comments by former vice-president Dick Cheney made during an interview with Politico critical of the new administration’s initial plans to close the Guantanamo Bay detention center and other moves the now former vice president viewed as “soft” on Al-Qaeda.

Meanwhile, the Washington bureau of another Middle East satellite channel, Al Arabiya, was showcasing the Iranian dimension of upcoming U.S.-European diplomatic talks in Germany, yet another story that was not in the American international mix.

In the end, America’s global image may well be determined more by the policies of the government than by who is writing about them. The shift in what people are learning about those policies, however, is still significant—and probably one that fits more with a changing world.

“These reporters from abroad work with a greater empathy and understanding of their own country’s view of America,” said Myron Belkind, who chairs the National Press Club’s International Correspondents Committee and served as an Associated Press bureau chief in Europe, South Asia and East Asia. “If you believe the best journalism is done by those who can report and write with a clear perspective of their audience,” he argued, “then you have to see this as a positive development.”

Next: Conclusion
← Prev Page
Page1Page2Page3Page4Page5You are reading page6Page7Page8
Next Page →