A distinguishing feature of the coverage of the race was how – with the notable exception of abortion – there was little discussion of the culture war issues that have influenced American politics in the last several decades. Media coverage of abortion amounted to 9% of religion coverage in the campaign. Attention to gay marriage and stem cell research made up a fraction of 1% of coverage. 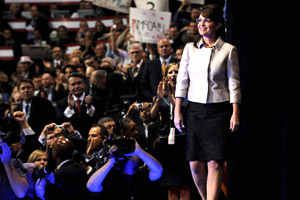 In some ways, Palin became the media’s vehicle to touch on these issues. After her selection, Palin dominated election coverage for several weeks. According to PEJ’s Campaign Coverage Index, between Aug. 29 and Sept. 15, four of the top 10 storylines focused on her, accounting for 39% of all campaign coverage for that period, which includes religion-focused reporting.

Much of that early coverage focused on her personal life, including her family values, church background and beliefs. But that initial focus had a strong presence in the religion narrative. Stories about Palin’s family background and beliefs accounted for fully 25% of campaign coverage focused on religious issues. The coverage later turned toward her public record and impact on the Republican ticket.

Most of this coverage touched on, or speculated about, Palin’s views on abortion and family values in light of her choice to give birth to a baby with Down syndrome and her unmarried daughter’s pregnancy.

A Sept. 2 San Francisco Chronicle front-page article tied the pregnancy of Palin’s daughter, Bristol, to her mother’s policy positions: “Palin – a staunch advocate of abstinence education – acknowledged in a statement that her 17-year-old daughter Bristol is five-months pregnant.” Another front-page article the same day in USA Today also linked the news with Palin’s views: “Dave Robertson, a political scientist at the University of Missouri-St. Louis, said social conservatives will likely give Palin and her family ‘the benefit of the doubt’ because of the governor’s views against abortion.”

These stories on Palin’s biography usually fell short of examining how her belief system informs her policy choices. Of all Palin’s religion-focused coverage, only 2% dealt directly with abortion policy implications, and 4% examined her religious belief system.

There were occasions when the mainstream media attempted to deal directly with the policy implications of Palin’s beliefs, but in one notable case, a journalist was criticized for the way he went about it. At one point in Charles Gibson’s ABC interview with Palin in September, he challenged her on a comment she once made about God’s will and the war in Iraq: “You said recently, in your old church, ‘Our national leaders are sending U.S. soldiers on a task that is from God.’ Are we fighting a holy war?”

Palin was quick to respond by saying that one cannot presume to know God’s will and indicating that was the intent of her original statement. Critics argued that Gibson took the quote out of context and failed to grasp the theological nuance of what Palin intended.

Next: Media Coverage of the Religious Vote
← Prev Page
Page1Page2Page3Page4Page5You are reading page6Page7Page8Page9
Next Page →