Obama Gets Most Coverage, Much of It on False Rumor He Is a Muslim

Religion played a much more significant role in the media coverage of President-elect Barack Obama than it did in the press treatment of Republican nominee John McCain during the 2008 presidential campaign, but much of the coverage related to false yet persistent rumors that Obama is a Muslim.

Meanwhile, there was little attempt by the news media during the campaign to comprehensively examine the role of faith in the political values and policies of the candidates, save for those of Republican vice presidential nominee Sarah Palin. 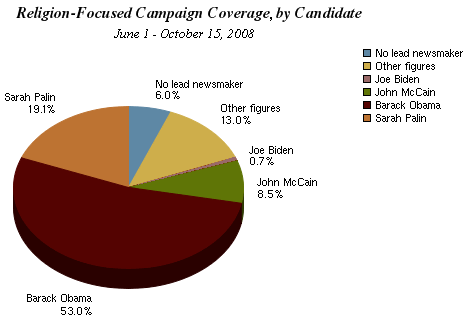 And when religion-focused campaign stories were covered by the mainstream press, often the context was negative, controversial or focused on a perceived political problem.

In all, religion was a significant but not overriding storyline in the media coverage of the 2008 campaign. But in a campaign in which an Obama victory would give the U.S. its first black president, religion received as much coverage in the media as race.

These are some of the findings of a new study of the coverage of religion in the campaign conducted by the Pew Research Center’s Project for Excellence in Journalism and Pew Forum on Religion & Public Life. The study examined religion-focused election coverage in 48 different news outlets between June 1 and Oct. 15, 2008. (Report methodology [anchor link] is included at the bottom of the report.)

The “culture war” issues that have been prominent in past elections, such as abortion and gay marriage, received minimal attention in 2008. The coverage they did receive tended to come in the form of reaction to statements by the candidates and quickly receded without generating any sustained narrative. When Palin was introduced to the nation as McCain’s running mate, her parenting choices raised the issue of abortion, but only momentarily. In one of the more episodic narratives – evangelical megachurch pastor Rick Warren’s presidential forum held at his church – the candidates’ answers on a question about abortion gained attention in the press the week of the event.

But the religious electorate – including evangelical voters – received relatively scant attention from the press during the general election, despite the Obama campaign’s aggressive outreach efforts and the subsequent gains made among these religious groups on Election Day. 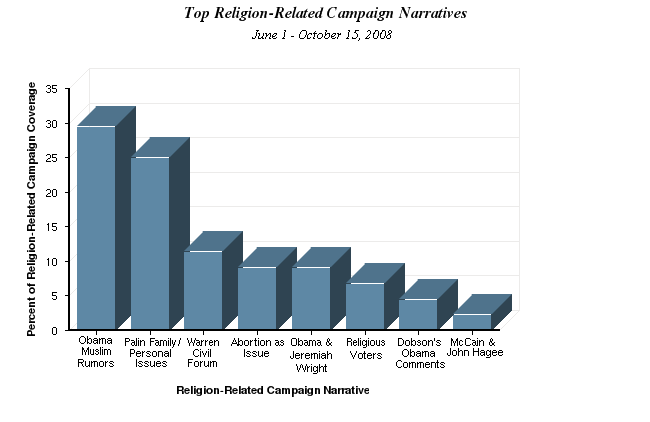 The study examined 7,592 campaign stories from 48 news outlets during the general election, from June 1, 2008, the week that the primaries ended and Hillary Clinton suspended her campaign, to Oct. 15, 2008, the day of the last presidential debate. The 283 stories in which religion played a significant role were analyzed in greater depth. This study builds on an earlier one jointly conducted by the Project for Excellence in Journalism and the Pew Forum that examined media coverage of religion in the primary campaign (see methodology [anchor link]).That earlier study is in some cases referred to here for comparison. The projects are both funded by the Pew Charitable Trusts.

Next: Religion in the General Election
← Prev Page
You are reading page1Page2Page3Page4Page5Page6Page7Page8Page9
Next Page →