The candidates’ connections to religious figures with unusual or controversial views became a media narrative this year. Each of the major presidential candidates and their running mates were at some time dogged with stories related to religious leaders.

In a roundabout way of probing the beliefs of both parties’ tickets, the press honed in on the words and actions of religious figures associated with all four. What the press did not do, generally, was take those words to the next level, looking deeper into the candidates’ beliefs to examine how they influence their positions on issues and impact their policy decisions.

Much of the trouble the candidates faced with their religious associations stemmed from video or audio recordings that captured these leaders speaking in houses of worship. In made-for-video moments, these recordings became widely circulated and were replayed and analyzed on political talk shows, blog posts and YouTube.

Media attention to Obama’s relationship with his former pastor, the Rev. Jeremiah Wright, and Trinity United Church of Christ – Obama’s church in Chicago until he resigned his 20-year membership in May 2008 – was one of the big stories of the primary season. The issue waned during the general election but was still the biggest “pastor problem” faced by any of the candidates. In the general election period, Obama’s former church and pastor made up 9% of the general election religion coverage and 13% of Obama’s. Looking at the entire primary season and general election period together – from January through mid-October – the Wright controversy was the single largest press narrative in the campaign, religious or otherwise. 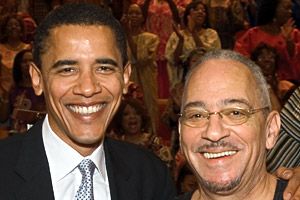 In addition to Wright, the controversy centered around two key events: inflammatory comments made by the Rev. Michael Pfleger, a controversial Catholic pastor, from Trinity’s pulpit and the Obama family’s formal departure from Trinity, the church where Obama and his wife, Michelle, were married and Obama and their children were baptized.

After the primaries, some media outlets still tried to probe the Wright-Obama connection. But others seemed to try to bring closure to the issue. For instance, a June 18 Hannity & Colmes interview with talk show host Elisabeth Hasselbeck used the Wright controversy to continue to raise questions about Obama’s judgment. But in the same week, a June 15 Washington Post front-page article reads more like a requiem, surveying the damage caused by a scandal the media helped broadcast: “This was not how it was supposed to be. Obama, the biracial presidential candidate who has pledged to unite Democrats and Republicans, rich and poor, blacks and whites, was going to provide an opening for Trinity and other black churches to shatter their stereotypes and bolster their national presence. Instead, a landslide of negative video of Trinity’s pastor, the Rev. Jeremiah A. Wright Jr., and right-wing political attacks left Obama’s former church and others like it even more marginalized and vilified.”

Even then, the issue did not disappear in some voters’ minds. An Oct. 14 CBS News/New York Times poll released three weeks before Election Day found 11% of voters were bothered by Obama’s past associations with Wright.

Obama also faced pointed public criticism for his policy positions from an evangelical leader with whom he had no ties – the Rev. James Dobson, founder of Focus on the Family and host of a weekday radio show broadcast on more than 3,000 stations in North America. During the week of June 23-29, Dobson’s criticisms of Obama – that he was “distorting the traditional understanding of the Bible” – accounted for 6% of the campaign newshole – the fourth-most prominent campaign narrative that week. This storyline disappeared almost as rapidly as it appeared, but, over the course of the general election period, this narrative represented 5% of the religion-focused coverage.

Palin was the most recent candidate to be linked by the press to controversial church leaders and practices.

When the surprise choice of Alaska’s governor was first unveiled by the McCain campaign, members of the press scrambled to report on all aspects of her biography – including ties to Pentecostal and evangelical churches she has attended in Wasilla, Alaska.

Some of the coverage was shaped by video and audio clips recorded in her church, an echo of the Wright controversy involving Obama. One audio clip taken at Wasilla Bible Church, a nondenominational, evangelical congregation, featured David Brickner, executive director of Jews for Jesus, an organization that seeks to evangelize Jews.

In the sermon, which was available on the church’s website, Brickner described God’s “judgment of unbelief” of unconverted Jews. But a Politico report stoked the controversy. The Sept. 2 article said that “Brickner also described terrorist attacks on Israelis as God’s ‘judgment of unbelief’ of Jews who haven’t embraced Christianity.” Palin’s pastor, Larry Kroon, was recorded endorsing Brickner’s message, with Palin in attendance. The McCain campaign immediately issued a statement to distance Palin from Brickner, saying she did not know he would be speaking that day.

Another incident linked to Palin focused on what was captured in another video. It featured Kenyan preacher Thomas Muthee praying for Palin as she launched her gubernatorial campaign in 2005. The video was taken at Wasilla Assembly of God, a church affiliated with the Assemblies of God, a Pentecostal denomination. Muthee is seen along with two other church figures laying hands on Palin, a common practice in Pentecostal churches intended to confer power and blessing on the recipient. Muthee’s prayer for Palin and her association with the church put a brief spotlight on Pentecostalism, which emphasizes such practices as speaking in tongues, prophesying, divine healing and other miraculous signs of the Holy Spirit.

In an Aug. 30 story, a spokeswoman for the McCain-Palin ticket told the Associated Press that Palin had attended different churches and did not consider herself a Pentecostal. In an interview shortly before her selection as McCain’s running mate but published shortly after it, Time magazine asked Palin what her religion was. Palin responded, “Christian.” When asked if she was any particular type of Christian, she answered, “No. Bible-believing Christian.”

Both Brickner and Muthee were the subject of news reports in Politico, the AOL news website, The Atlantic and MSNBC’s Countdown with Keith Olbermann. A headline about the Muthee incident, which sensationalized the figure by calling him a “witch hunter” – Muthee had prayed for Palin to be protected from “every form of witchcraft” – remained on the Drudge Report’s website for days.

Perhaps due to their late emergence into the campaign, these stories about Palin’s religious associations never snowballed to anywhere near the level of exposure given to Obama’s relationship with Wright or McCain’s association with Texas evangelical megachurch pastor the Rev. John Hagee.

For McCain, the pastor predicament occurred at the end of the primary season, when Hagee, one of his endorsers, made comments that drew fire. Hagee, who later apologized, said Adolf Hitler had been fulfilling God’s will by hastening the desire of Jews to return to Israel in accordance with biblical prophecy. McCain then rejected Hagee’s support. It was mostly a short-lived incident but burst into McCain’s media coverage in the week just before the general election began. During the week of May 19-25, the story composed 8% of the total campaign newshole – but between June and mid-October, it dropped considerably, composing only 2% of all the religion-focused coverage for that period.

This story gained little traction. While it is difficult to pinpoint the exact reason for the lack of coverage, McCain’s relationship with Hagee was less personal than Obama’s with Wright, and McCain made decisive and quick efforts to distance himself from the man. The press did not use the story to probe further into McCain’s religious faith. The issue lingered only briefly into the early weeks of the general election, accounting for 4% of McCain’s religion-related press between June and mid-October.

The New York Times ran a front-page story on June 9 that focused on McCain’s efforts to woo religious conservatives but reported that some of these groups were wary of McCain given the way he distanced himself from Hagee. On May 23, a panel on CNN’s Anderson Cooper 360° discussed the idea that the incident may have helped Obama with religious voters and may have hurt McCain.

Biden was not criticized for a personal relationship with a controversial religious figure but rather for making comments at odds with religious leaders in his own faith. Biden, a lifelong Catholic who had considered becoming a priest when he was a student, was reproved by Catholic bishops for his stance supporting abortion rights and his interpretation of Catholic teachings on the issue.

On the Sept. 7 Meet the Press, host Tom Brokaw asked Biden what he would say if Obama asked him, “When does life begin? Help me out here, Joe.” Biden replied, “I’d say, ‘Look, I know when it begins for me.’ It’s a personal and private issue. For me, as a Roman Catholic, I’m prepared to accept the teachings in my church.” But, Biden added, “for me to impose that judgment on others is inappropriate in a pluralistic society.”

That prompted a response from some U.S. Catholic bishops, including a joint statement by Cardinal Justin F. Rigali, chairman of the U.S. Bishops Committee on Pro-Life Activities, and Bishop William E. Lori, chairman of the U.S. Bishops Committee on Doctrine. The Sept. 9 statement said that Biden’s “claim that the beginning of human life is a ‘personal and private’ matter of religious faith, one which cannot be ‘imposed’ on others, does not reflect the truth of the matter.” Headlines portrayed the reaction in no uncertain terms. USA Today ran a Religion News Service story entitled “Bishops Slam Biden over Abortion Comments.” On FoxNews.com the headline was “Bishops Criticize Biden’s Abortion Comments.”

A local bishop from Biden’s hometown in Delaware, W. Francis Malooly of the Diocese of Wilmington, did not sign the Sept. 9 statement. But he wrote a public letter published in The [Wilmington] News Journal on Oct. 26 in response to a comment about abortion Biden made in an Oct. 19 interview. Malooly wrote that Biden presented “a seriously erroneous picture of Catholic teaching on abortion” when he said that the Catholic Church has “ ‘wrestled with this for 2,000 years,’ ” and when he “claimed repeatedly that the Church has a nuanced view of the subject that leaves a great deal of room for uncertainty and debate.” The bishop called these assertions “simply incorrect,” saying, “The teaching of the Church is clear and not open to debate.” The Delaware bishop’s letter received little national coverage.

The reaction from Catholic bishops was reminiscent of the one John Kerry, also a Catholic Democrat who supports abortion rights, received during his run for the presidency in 2004.

Overall Impact of the Pastor Problems

While it is difficult to evaluate the effect of the candidates’ connections to religious leaders on the election outcome, their presence in the 2008 campaign narrative stood out. Although the individuals focused on did not necessarily represent the personal religious beliefs of the candidates, they became linked with those candidates in press coverage. Their significance, perhaps appropriately, seemed to depend on how close the candidate was to the pastor.