Religion-related campaign coverage focused far more on Obama than it did on any other single figure during the general election. He was the lead newsmaker in more than half of the religion-related stories, while McCain was a lead figure in less than one out of 10. (If 50% or more of a given story is about one person, that individual is credited as the lead newsmaker.) This lopsided attention to Obama echoed a trend observed in the pre-primary and primary season. Between January 2007 and April 2008, Obama was the subject of 55% of religion-focused coverage, while McCain occupied less than 1%. 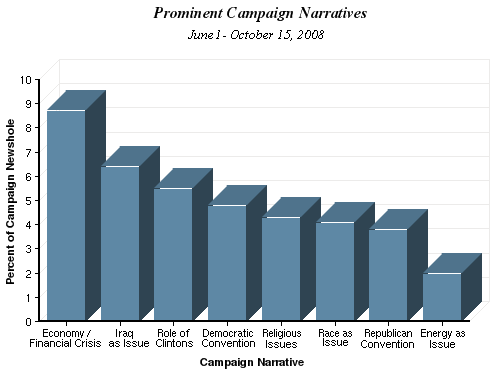 In the general election stage of the race, even Palin received more religion-related coverage than McCain, occupying the lead role in 19% of such coverage. Vice President-elect Joe Biden, by contrast, was a lead newsmaker only about 1% of the time. When looking at religion coverage compared with other topics in the campaign, the data suggests that faith was indeed a significant part of the narrative. Even in a campaign where race-related themes were at least a constant subtheme, that topic did not eclipse religion-focused coverage (each occupying 4% of the campaign newshole). Indeed, race and religion often intersected in campaign media coverage.

Still, religion (and race) as a media focus was secondary to economic and international concerns and speculation over how the next administration would address them. The economic crisis (9% of overall campaign coverage) and the Iraq war (6%) figured more prominently than religion.

Other issues such as energy (2%) and the environment (less than 1%), which had been hot-button items earlier in the year, received less attention than religion-focused coverage, and the Republican National Convention (4%) received about the same amount.

Next: False Rumors that Obama is a Muslim
← Prev Page
Page1You are reading page2Page3Page4Page5Page6Page7Page8Page9
Next Page →