Generally, evangelical, Catholic and other religious voters received little coverage by the press in the 2008 election. Media attention to the religious electorate was minimal, a pattern reflected in coverage of the electorate overall. Only 7% of religion coverage in the election focused on these voting groups. Of this, evangelicals were more often the focus than other groups, and the efforts of the Obama campaign to reach these voters received special attention. But this coverage was the exception. The little attention by the press to the religious electorate is in line with the electorate overall. 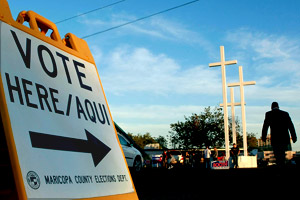 Media coverage notwithstanding, how important were religious voters to the 2008 election? A Pew Forum analysis of exit poll data shows that Obama received as much or more support among nearly every religious group compared with their support for Kerry in 2004. Still, a sizeable gap persisted between the support Obama received from white evangelical Protestants and his support among the religiously unaffiliated. Similarly, a sizeable gap favoring Republican candidates persisted between those voters who attend religious services regularly and those who attend less often.

One of the most important shifts was among Roman Catholics, who supported Bush in 2004 but broke for Obama in 2008. Yet Catholic voters received less coverage than evangelicals during the general election. When Catholics’ political values and voting behavior were scrutinized, it was often found in the alternative religious press and among religion bloggers.

All in all, the lack of any significant media attention to these voting groups underscores a general election in which sustained, thematic coverage of religion was eclipsed by scandals and events that found their way onto the news agenda more naturally.