Sunday morning August 10, the Washington Post offered readers a front page story about US swimmer Michael Phelps’ gold medal victory in the 400-meter individual medley, the first of eight he would earn at the Beijing summer Olympics.

“There might have been a more spectacular and thoroughly dominant manner in which Michael Phelps could have begun his Olympics on Sunday morning,” the piece began, “but that seems unlikely.” 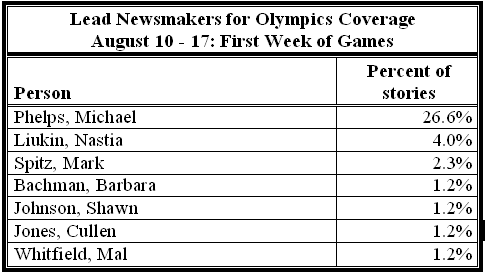 The following morning, on NBC’s Today show from Beijing, Ann Curry reported on Phelps’ second medal victory with a fixation on numerology. “In a country where eight is a lucky number, Michael Phelps’ improbable quest for a record eight gold medals hinged on teammate Jason Lezak’s anchor leg swim…By eight lucky and dramatic hundredths of a second, Lezak out-touched the trash-talking French, shattering the world record, and delivering Phelps his second gold of the games.”

The mania only grew from there. And by the time the week was out,
Michael Phelps would dwarf all other American athletes multiple times
in media attention.

How has the U.S. press covered the Olympics Games? To what extent did the news media take the opportunity to cover the country of China while they were there? And how has U.S. coverage differed from that in other countries?

To get answers, the Pew Research Center’s Project for Excellence in Journalism conducted a special analysis of coverage of the Olympics and China generally in the week leading up to the Games and during the first week of competition.

The study finds that the coverage has been heavily tilted toward just three areas of competition—swimming, gymnastics and track and field. No other sport has attracted much news coverage at all. The games were also dominated by a single athlete, Michael Phelps, with virtually no one else really emerging as a major figure, including the star female gymnasts.

In general, in the final days leading up to the Olympics and the first week of the competition, the press focused primarily on the Games rather than life in China or its political matters there.

And NBC News, which is in somewhat of a more complicated situation journalistically because of the financial stake its corporate parent has in Olympic ratings, has devoted three times as much of its newshole to the Games as has its journalistic competitors.

These are some of the findings of the study, which is based on an analysis of more than 390 news stories about China or the Olympic Games that appeared from August 3 through August 17, 2008—the week leading up to the Games and the first week of the Games themselves. The majority of data is drawn from 48 different news outlets that make up PEJ’s weekly News Coverage Index, including outlets from newspapers, online, network TV, cable TV, and radio. The study also looked at the Web sites of popular papers in three foreign countries: Russia, China, and Great Britain (Rossiyskaya Gazeta and Komsomolskaya Pravda from Russia, The People’s Daily and Yangtse Evening Post from China and The Sun and Daily Telegraph, from England).
The study examined news coverage of the games, not the live coverage of the Olympic events themselves carried on NBC and its various TV channels.

FOOTNOTE
1. PEJ’s weekly News Coverage Index examines the first 30 minutes of the Today Show and the two other network morning television broadcasts because those are usually the segments of the shows that are devoted to the leading news of the day.

Next: The Olympics as a Major Story
← Prev Page
You are reading page1Page2Page3Page4Page5Page6Page7Page8Page9Page10
Next Page →

The Media's Olympics
The Olympics as a Major Story NBC's News Leads with the Olympic Games Attention Begins Early--August 3-8, 2008 The Games Begin--August 10-17 What Was Covered and What Wasn't Differences by Sector Olympics News Coverage Internationally--A Snapshot Methodology Topline