Although the Olympics officially began on August 8, the press was in full swing the week before. From August 3 to 8, 14% of all media coverage was devoted to the Olympics and China. In general, these stories were dominated by Chinese preparations and the opening ceremonies, and sports received comparatively little coverage.

The top storyline of the week leading up to the start of the Games focused on the elaborate opening ceremonies (18% of the Olympic and China newshole) and how the Chinese had prepared for the Games (another 18%). This included stories on how China was preparing for a large influx of tourists and how Beijing was going under a significant “makeover” as the games approached. The question of China’s human rights problems came next (13%). Security concerns filled 6% and environmental concerns, largely pertaining to the effect on athletes, 4%. Taken together, those five storylines made up 59% of the Olympic and China coverage.

During the lead-up week, there was also increased coverage of China and its internal workings and culture, even in stories that were not directly related to the Olympic Games themselves. The Games, in other words, afforded journalists an opportunity, access and a news hook for viewers to learn about the new China. These stories about China, not directly related to the Games themselves, made up 3% of the overall media newshole that week

Sometimes, these stories about preparing for the Games were eerily similar. On Wednesday, August, 6, on the CBS Evening News, Barry Petersen reported on how, “From kids to cabbies, there is an Olympic push to learn English.” And not just the language, Peterson says. “Beijing is a city where rudeness rules. People litter, push or spit. So these students are giving a dose of polite, and handing out ‘good ways to act’ cards. ‘Line up properly,’ or ‘don’t be so loud.’”

Two nights earlier, a piece by correspondent Ian Williams on NBC’s Nightly News covered similar territory, though this one included noting the removal of cars to help with pollution. Williams described Beijing as, “A city charged-up, brimming with nationalistic pride.” He adds, “Nothing has been left to chance. The weather has been improving, but 32,000 scientists have been hired to try and keep it that way for Friday’s opening.” 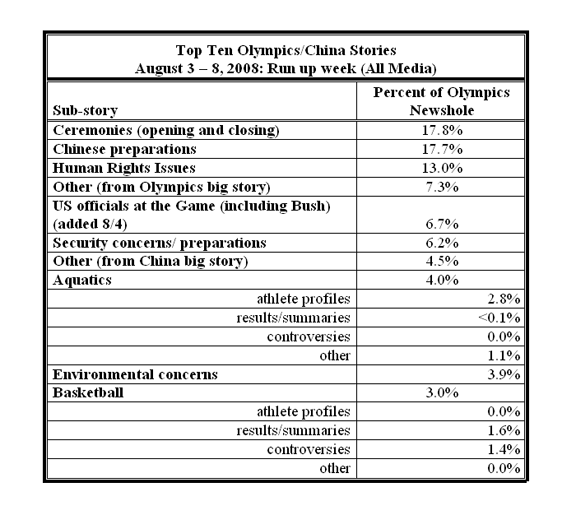 One storyline that did receive substantial attention was President Bush’s controversial decision to appear at the opening ceremonies. Stories about U.S. officials appearing at the Games made up 7% of the Olympics newshole. President Bush was the lead newsmaker in roughly 15% of Olympics and China stories in the lead-up to the Games, far more than any other individual during that week—including any athlete or Chinese official.

The Bush storyline also intersected with human rights. A Today Show piece on August 7 illustrated how. Anne Curry reported that, “The President, who has been criticized for agreeing to attend Friday’s opening ceremonies bluntly condemned China’s handling of human rights.” The Chinese foreign ministry responded by saying, “China is firmly opposed to any words or acts that use human rights to interfere in other countries’ internal affairs.”

Of all the major storylines leading up to the games, only two sports gained any measurable attention, aquatics (swimming and diving) and basketball, and even that was limited to 4% and 3% of the Olympic newshole, respectively.

The Media's Olympics The Olympics as a Major Story NBC's News Leads with the Olympic Games
Attention Begins Early--August 3-8, 2008
The Games Begin--August 10-17 What Was Covered and What Wasn't Differences by Sector Olympics News Coverage Internationally--A Snapshot Methodology Topline