How big a story have the Games proven to be? The week running up to the launch of the Games on August 8 and through first week of competition, the Olympics and stories about China filled 14% of the newshole studied. That was enough to make it the No. 2 story in the American media, as measured by PEJ, just slightly ahead of the military conflict between Georgia and Russia (13%). [1]

The bulk of Olympics-related news was straight coverage of the games themselves (12%). Another 2% was made up of stories about China.

That was still well behind the race for president (23%). Thus the notion that the race for president would be blotted out by the Games, or go into some kind of hiatus, was not the case, at least not in the news media. The campaign, during those two weeks, filled nearly twice the airtime on TV and radio and space in print and online. 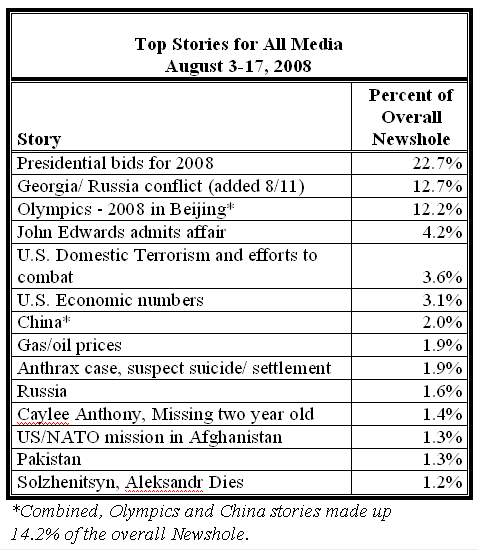 Nonetheless, the Games did seem to cause some drop in election attention. In the six weeks running up to the Olympics (June 21 through August 2) the election was 29% of the newshole—roughly 20% more than during the two weeks of the Games studied. And for the year, the election has filled 36% of the newshole studied, a third more than during these two weeks.

The games were also a boon to attention to sports. Normally, sports barely registers in the mainstream press coverage by jumping off the sports pages onto the front page, or off ESPN onto general news cable channels. For the year so far, sports has filled just 1% of the newshole. For these two weeks, sports jumped to 9% of the overall news coverage—and that is subtracting the Olympic coverage that was not strictly about athletics.

Were other stories bumped from the news agenda by the Games, and if so, which ones? Knowing that for sure, of course is difficult. But several stories that have generally averaged more of the newshole did drop during this time. The coverage of the U.S. economy (at 7% during the previous six weeks), was down by more than half to 3% during these two weeks. Stories about gas and oil prices, which had been at 5% was also down by more than half, to 2%. Coverage of the Iraq war also dipped slightly, going from 4% in the previous six weeks to 3% during the two weeks examined around the Olympics.

Interestingly, anticipation of the games was almost as big a story as the games themselves. The amount of coverage of the Olympics and China was virtually the same the run-up week to the Olympics (14%) as the first week of the games (15%). What did change, perhaps naturally, was the extent to which China vs. the Olympics themselves were the story. The week prior to the Games, 11% of the coverage was about the games and 3% about the nation. After the competition began the mix was 14% and 1%. 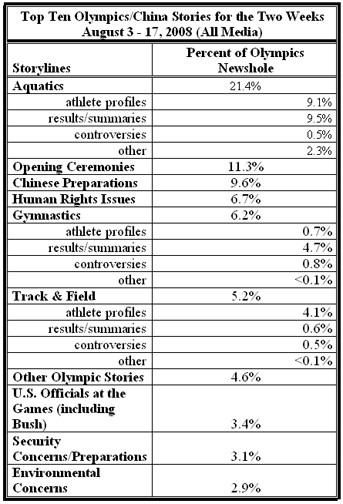 Next: NBC's News Leads with the Olympic Games
← Prev Page
Page1You are reading page2Page3Page4Page5Page6Page7Page8Page9Page10
Next Page →

The Media's Olympics
The Olympics as a Major Story
NBC's News Leads with the Olympic Games Attention Begins Early--August 3-8, 2008 The Games Begin--August 10-17 What Was Covered and What Wasn't Differences by Sector Olympics News Coverage Internationally--A Snapshot Methodology Topline