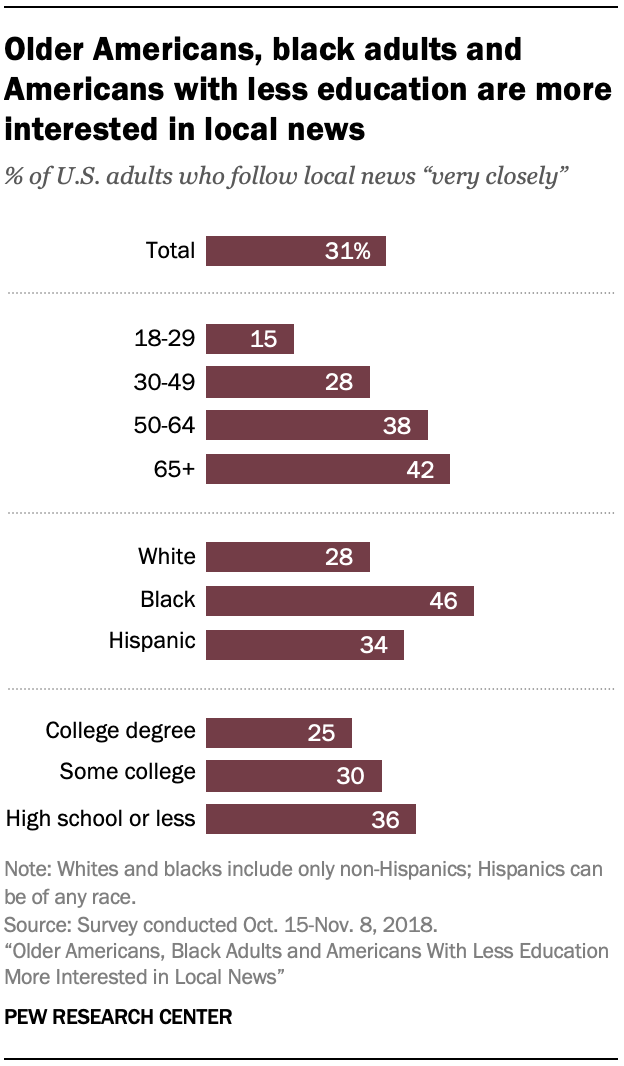 Nearly a third of U.S. adults (31%) follow local news very closely, but local news does not play an equally vital role for all Americans. Older Americans, black adults and those with a high school education or less show considerably more interest in local news than their counterparts, according to a new analysis from Pew Research Center. These same groups prefer getting their local news via the TV rather than online.

This new analysis of demographic differences in Americans’ local news habits and attitudes builds off a landmark report on the state of local news in the U.S., which surveyed nearly 35,000 adults between Oct. 15-Nov. 8, 2018, on the Center’s American Trends Panel and Ipsos’s KnowledgePanel.1 Detailed tables showing demographic breakdowns for questions included in the survey are available as an appendix. The data is also available to download.

Relatively few Americans ages 18 to 29 (15%) follow local news very closely, compared with about three-in-ten (28%) of those 30 to 49 and about four-in-ten (39%) of those 50 and older. Black Americans show a stronger connection to local news: Just under half (46%) follow it very closely, while about a quarter (28%) of white Americans do the same, along with about a third (34%) of Hispanic adults. And about a third of Americans with a high school diploma or less education (36%) are very interested in local news, more so than those who have attended some college (30%) or received a college degree (25%).

Additionally, there are large differences by age in how Americans prefer to get local news. Those ages 50 and older primarily turn to the TV set, while those younger than 50 mostly prefer online pathways to local news. Black Americans and those with a high school diploma or less education also express a far greater preference than their counterparts for getting local news through the TV set rather than online, in print or on the radio. For example, about half of those with a high school diploma or less prefer the TV set (52%) compared with 29% of those with a college degree and 39% of those with some college education.

Those groups who are less likely to prefer TV tend to express a greater preference for the internet. For instance, 60% of those ages 18 to 29 prefer the internet, along with about half of 30- to 49-year-olds (47%).

When turning to online pathways to local news, most U.S. adults prefer news websites (23%) to social media (15%), but there are some exceptions. For instance, 18- t0 29-year-olds are about evenly split between their preference for social media and news websites and apps. The remaining age groups, on the other hand, are more likely to use websites than social media for local news.

Younger Americans are less likely to financially support local news, more likely to say they’re not interested in it 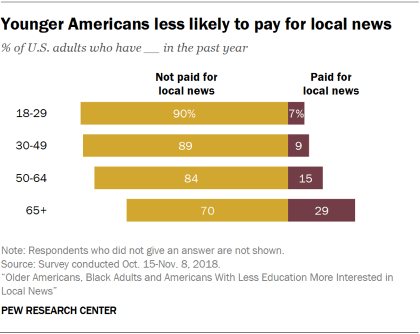 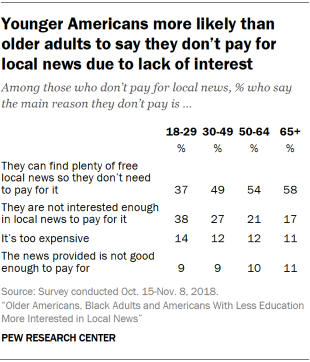 The most common reason Americans give for not paying is that plenty of local news is available for free – about half or more among all but the youngest adults say so.

Those ages 18 to 29, however, are more evenly divided between not paying for local news because of the availability of free content and the fact that they aren’t interested enough to pay for it. About four-in-ten (38%) say they don’t find local news interesting enough to pay for, and about the same share say they can find plenty of free local news (37%). Smaller proportions of those 30 and older say their lack of interest is the reason they don’t pay.

Black, Hispanic Americans see many local news topics as more important for their daily lives than do white Americans

Black and Hispanic Americans are more likely than white Americans to say eight of the 11 local news topics asked about in the survey are important to know about for daily life. For five of the topics, the differences are substantial: jobs, prices, crime, schools, and traffic and transportation.

Black and Hispanic adults are about three times as likely as white adults to say jobs and unemployment are important to be informed about for their daily lives, and they are about twice as likely or more to say this about local schools and school events. Black and Hispanic Americans are also much more likely than whites to say this about prices for local goods and services, crime, and traffic and transportation.

Weather is the one topic where all Americans show equal interest. Roughly seven-in-ten whites, blacks and Hispanics say it is important for their daily lives. 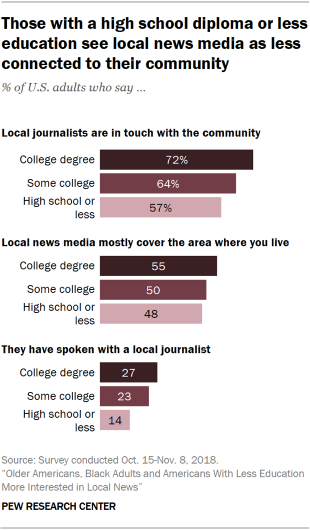 U.S. adults with a high school diploma or less education give their local news media lower marks on three measures of community connection than those with a college degree.

When asked if they thought local journalists were in touch with their community, just over half of those with a high school education or less (57%) say they are in touch, compared with nearly three-quarters of those with a college degree (72%) and about two thirds of those with some college (64%).

The differences by education are smaller on the question of whether the local news media cover the area where they live: about half of those with a high school education or less (48%) and with some college (50%), compared with 55% of those with a college degree.

There are no differences by education in the marks they give local media on seven core job functions.