YouTube is vast and constantly changing. In order to craft a manageable and meaningful research project, Pew Research Center limited the scope of data collection to only the most popular channels on the site. These popular channels alone produced a total of 243,254 videos during the first week of 2019, totaling 48,486 hours of content. The average video was 12 minutes long, although the length of videos posted during this period varied widely: Some 3% of the videos lasted longer than 60 minutes.

These findings also hint at the scale of how many hours people around the globe watch videos on the platform. Collectively, the videos produced by these popular channels were viewed over 14.2 billion times worldwide after one week on the site. Of course, these views were spread across a vast number of videos – each individual video received an average of 58,358 views in its first week, although 50% received fewer than 3,860 views. Conversely, a small fraction of these videos received substantial engagement: The 10% most-viewed videos were responsible for 79% of all the views that went to new content posted by popular channels during the week.

Videos generally received the most engagement during their first day on the platform, with engagement tapering off over the course of the week following their publication. Collectively, two-thirds (64%) of the total views that these videos received in their first week on the platform came on the day they were posted – as did 79% of their likes, 73% of their dislikes and 80% of their comments.

A majority of channels that posted a video in the first week of 2019 did so in a language other than English, and a small number of channels produced the majority of videos 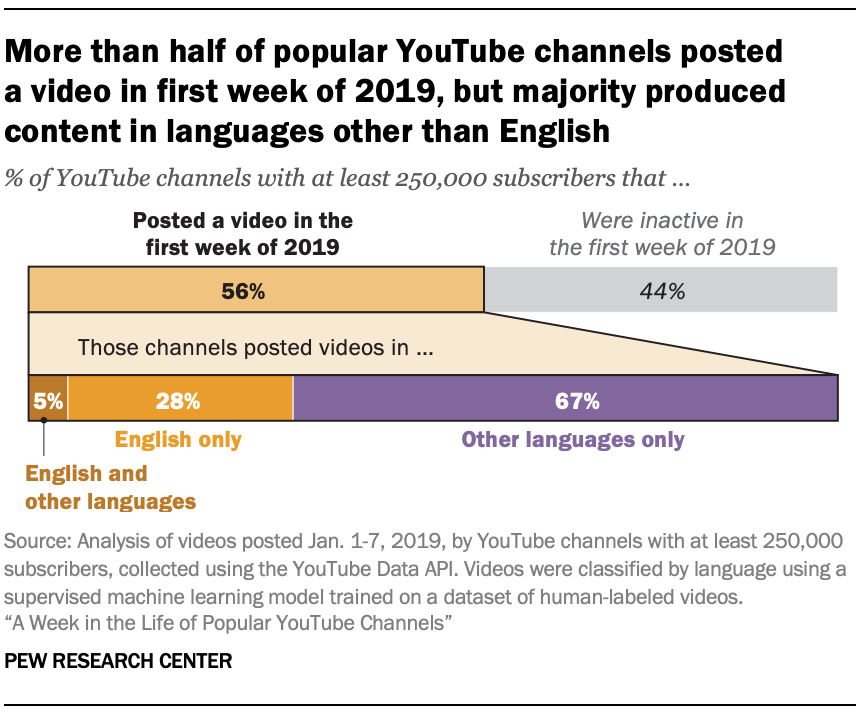 Just over half of the popular channels on YouTube posted at least one video on the platform during the first week of 2019, and a majority of them posted content that contained segments in a language other than English.2 Of the 43,770 popular channels that the Center identified as of December 2018, 56% posted a video in the first week of the new year. And within this subset of active channels, 28% posted videos exclusively in English. Meanwhile, 67% posted videos exclusively in languages other than English, and 5% posted videos in multiple languages including English.

“Active” channels (those that posted at least one video in the first week of 2019) ranged widely in the quantity of content they produced during the first week of 2019. Three-in-ten (31%) of these active popular channels posted exactly one video, while 55% posted more than one video but fewer than 10. Just 14% posted 10 or more videos during the study period, but this subset of channels was responsible for publishing 75% of all of the videos uploaded by popular channels during the week.

Fewer than one-in-five videos from popular YouTube channels were in English, but these videos received more views than videos in other languages

Thanks to these high levels of posting activity by non-English and multilingual channels, the majority of the individual videos posted by all popular channels were in a language other than English. This analysis finds that more than four out of every five videos uploaded to the site during the week contained content in a language other than English, while 17% of all the videos posted by popular channels during the week were in English. But despite being less common than videos in other languages, English-language videos tended to be more popular, generating a median of 13,316 views (99,043 on average) in their first week, compared with a median of just 3,028 (50,310 on average) for videos in other languages. 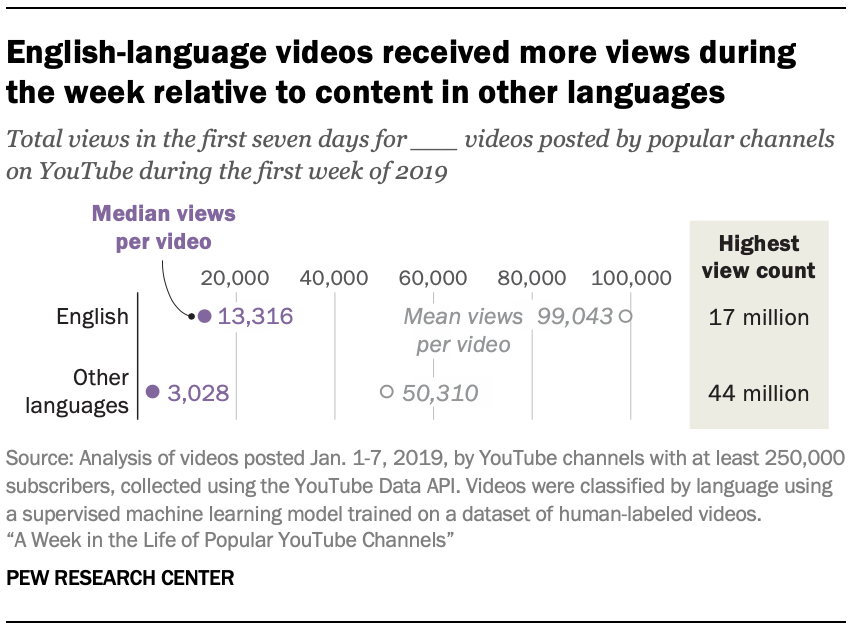 Put differently, English-language videos comprised just 17% of the videos that were published by popular channels during the week, but they received 28% of all of the views received by popular-channel videos during their first week after being published. English-language videos also received more likes (298 median vs. 42), dislikes (16 median vs. 5) and comments (47 median vs. 6) and were longer than videos with content in other languages (a median of 7 minutes vs. 4).

To place the videos posted by popular channels in the context of all of the content posted to YouTube overall, the Center used the YouTube API to compile a separate list of the most-viewed videos that were published during the week, then compared this list of videos with those posted by popular channels during the same period. For reasons that are unclear, the results that were returned by the API do not appear to be complete, but they nonetheless provide an interesting point of comparison and suggest that popular channels are responsible for many of the most-viewed videos on YouTube.1

Of the top 500 videos collected from the API, 76% were present in our list of videos produced by popular channels. Of these, the majority (60%) were in English, while 16% contained content in another language.2

Just 21% of the videos in the top-500 list were published by channels that had fewer than 250,000 subscribers. According to the API, the most popular such video was a foreign language short film that had received over 33 million views as of Jan. 22, 2019. However, this channel soon crossed the 250,000-subscriber threshold and by June 2019 had reached nearly 1.5 million subscribers.

1. This list was collected on Jan. 22, 2019, based on view counts as of that date, and was restricted to videos that were available to view in the United States (the default filter for the API). According to the results returned, the most viewed video published during the first week of 2019 had received 111 million views by Jan. 22, but the video that the API reported to be the 500th most-viewed video of the week had received just under 67,000 views (66,752). In comparing our list of videos published by popular channels against the API’s list of the top 500 videos overall, we found 36,272 videos that were published by popular channels during the week that received more views than the video the API ranked as 500th. The YouTube API documentation does not provide enough information to explain this discrepancy, but these findings suggest that this list is incomplete and represents only a sample of popular videos that were published in the first week of 2019.

2. An additional 15 videos were uploaded from channels that passed the 250,000-subscriber threshold after we had completed scanning for popular channels in December 2018, and one video was published by a channel that had been popular at the time but was not correctly identified by the scanning process that the Center used to identify popular channels.

Next: 2. Children’s content, content featuring children and video games were among the most-viewed video genres
← Prev Page
Page1You are reading page2Page3Page4Page5Page6Page7Page8Page9
Next Page →

A Week in the Life of Popular YouTube Channels
1. Popular YouTube channels produced a vast amount of content, much of it in languages other than English
2. Children’s content, content featuring children and video games were among the most-viewed video genres 3. Certain keywords in video titles and descriptions were associated with more views Acknowledgments Methodology Appendix A: Most active popular channels by language Appendix B: Most popular videos in first week of 2019, by category Appendix C: 20 title keywords associated with largest increase in median views