Along with examining the number of videos posted and languages used by these popular channels, this analysis also sought to gain a deeper understanding of the actual content of the videos these channels produce. However, there are limits to how much information can be gleaned from the categories and descriptions attached to YouTube videos themselves. The YouTube Data API provides topic tags for videos and channels, but these topics are often too general (“TV shows”) or too specific (“Music of Latin America”) to be useful for a broad analysis of video content. These topic tags have also not been validated for accuracy, and in some cases were not available: 8% of the videos and 3% of the channels included in this analysis did not have any topic tags assigned to them.

To address these limitations and more fully categorize the English-language content produced by popular YouTube channels, Pew Research Center commissioned human coders on Amazon’s Mechanical Turk crowdsourcing platform to watch these videos and categorize them into topical areas. After accounting for videos that had been removed or deleted at the time the coding took place, as well as videos that had been misclassified as being in English by our automatic language detection software, a total of 37,079 videos were included in this analysis.3

The human coders were instructed to classify videos into 11 broad categories. These categories, along with examples of the specific types of content that might be included in each, are highlighted in the table below: 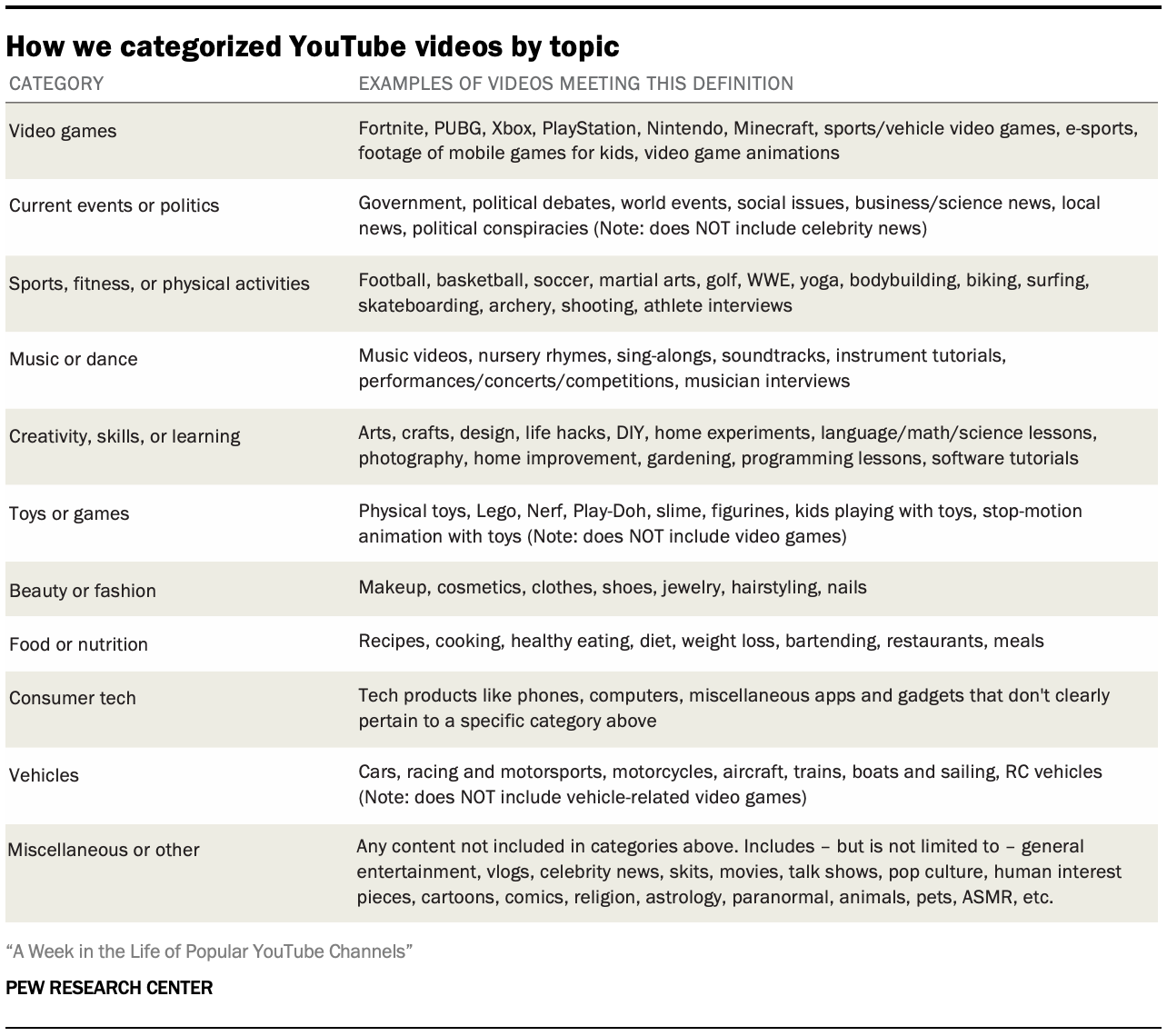 Along with coding videos into these general topical categories, the Center also coded videos along three other metrics:

Each video was coded by three different individuals to ensure there was adequate agreement on the content of the video. The coders’ responses were then reconciled using various thresholds designed to maximize agreement with Center researchers.4

Overall, one-third of the videos uploaded by popular channels during the week consisted of miscellaneous videos pertaining to general entertainment and other topics, such as vlogs (video blogs), celebrity news, movies, pop culture, pranks and pet videos. Of the more specific content categories, video games (accounting for 18% of the coded videos) were the most common. Videos related to international current events or politics (12% of coded videos), as well as those relating to sports or fitness (9%) and music/dance (9%), were also among the more common topics posted during the week. In terms of overall views, videos about video games, vehicles (1% of coded videos), food (2%), and toys or games (3%) were among the most-viewed categories on average. For a list of the most-viewed individual videos in each category during the week, see Appendix B. 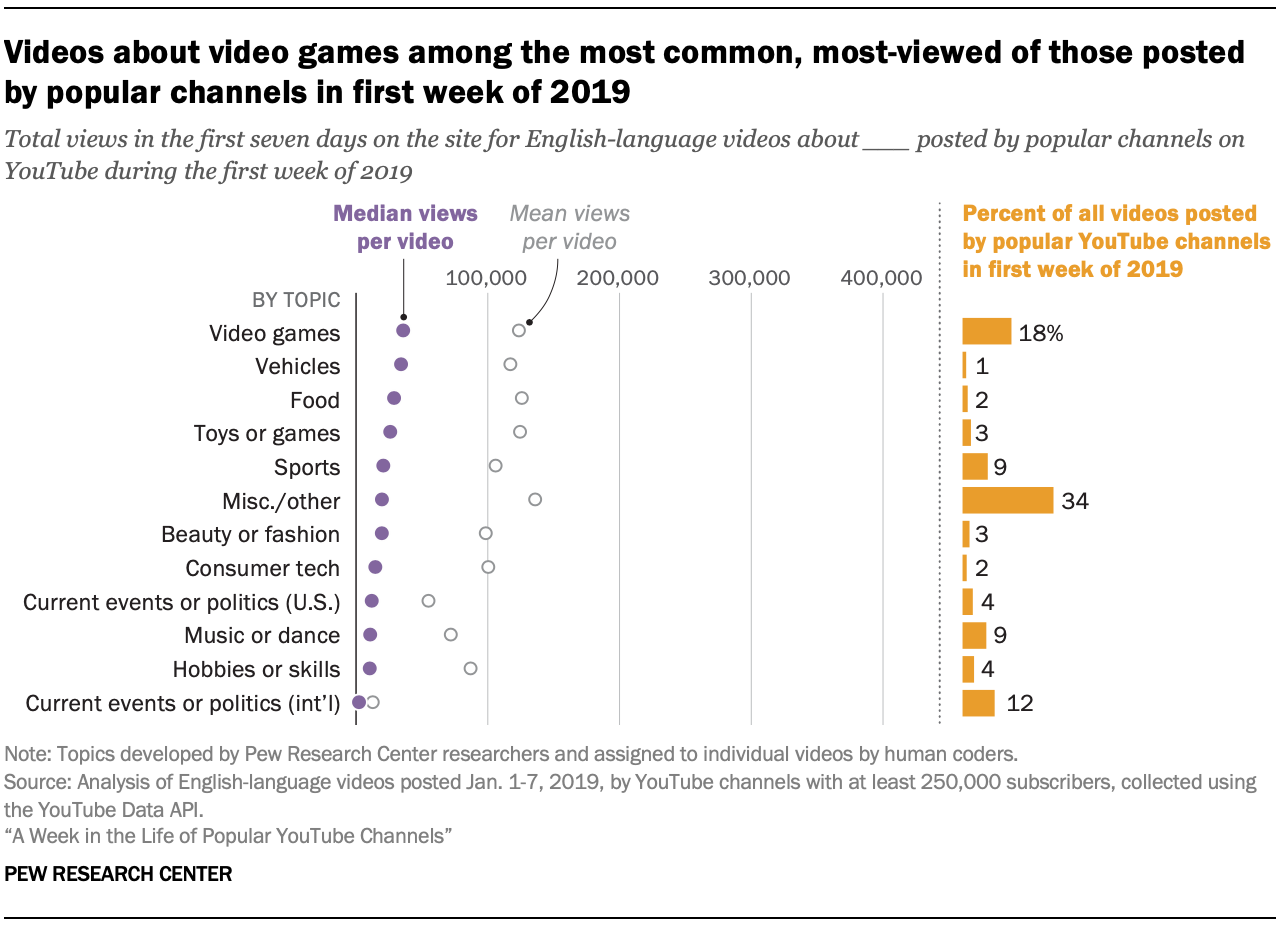 Children’s videos tended to be longer and received more views than many other types of content; large share of these videos focused on toys or games

In total, just 4% of all English-language videos posted by popular YouTube channels in the first week of 2019 appeared to be aimed at children under the age of 13. But despite comprising a relatively small share of the total, children’s videos tended to be longer, received more views, and came from channels with a greater number of subscribers relative to content aimed at a general (teen or adult) audience. Videos that appeared to be intended for children averaged 153,227 views (median of 17,540), compared with an average of 99,713 views (14,187 median) for other videos. Channels that posted children’s videos also had many more subscribers: 1.9 million on average (872,188 median) vs. 1.2 million (586,588 median) among channels that did not post a video aimed at children during the week. And half of all children’s videos lasted at least 11 minutes, compared with a median of 7 for other videos.

Channels that produced videos about toys or games – especially those that appeared to target children – also had more subscribers than average. Channels that produced at least one video during this week about toys or games that was aimed at children had, on average, 2.1 million subscribers (median of 1.1 million), compared with 1.2 million (586,126 median) for channels that did not produce any videos meeting this description. 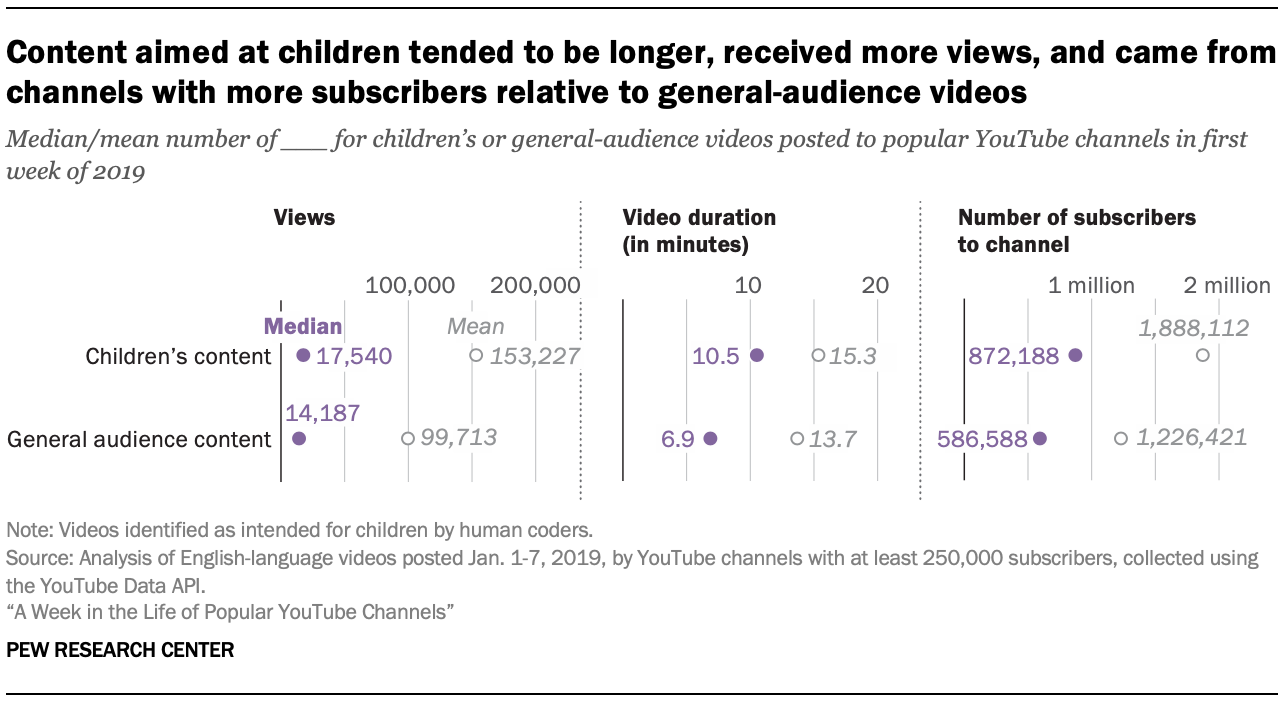 Beyond this specific subset of videos targeted to a young audience, the broader set of videos that included a child or children similarly stood out from other types of content. In total, the Center’s analysis estimates that just 2% of videos posted by popular channels during the first week of 2019 featured a child or children that appeared to be under the age of 13. However, this small subset of videos averaged three times as many views as did other types of videos: Videos that featured a young child received an average of 297,574 views (median 56,527) compared with an average of 97,081 views (median 13,794) for those that did not. Furthermore, channels that produced at least one video that featured a child averaged 1.8 million subscribers, compared with 1.2 million for those that did not (913,769 vs. 592,057 median). 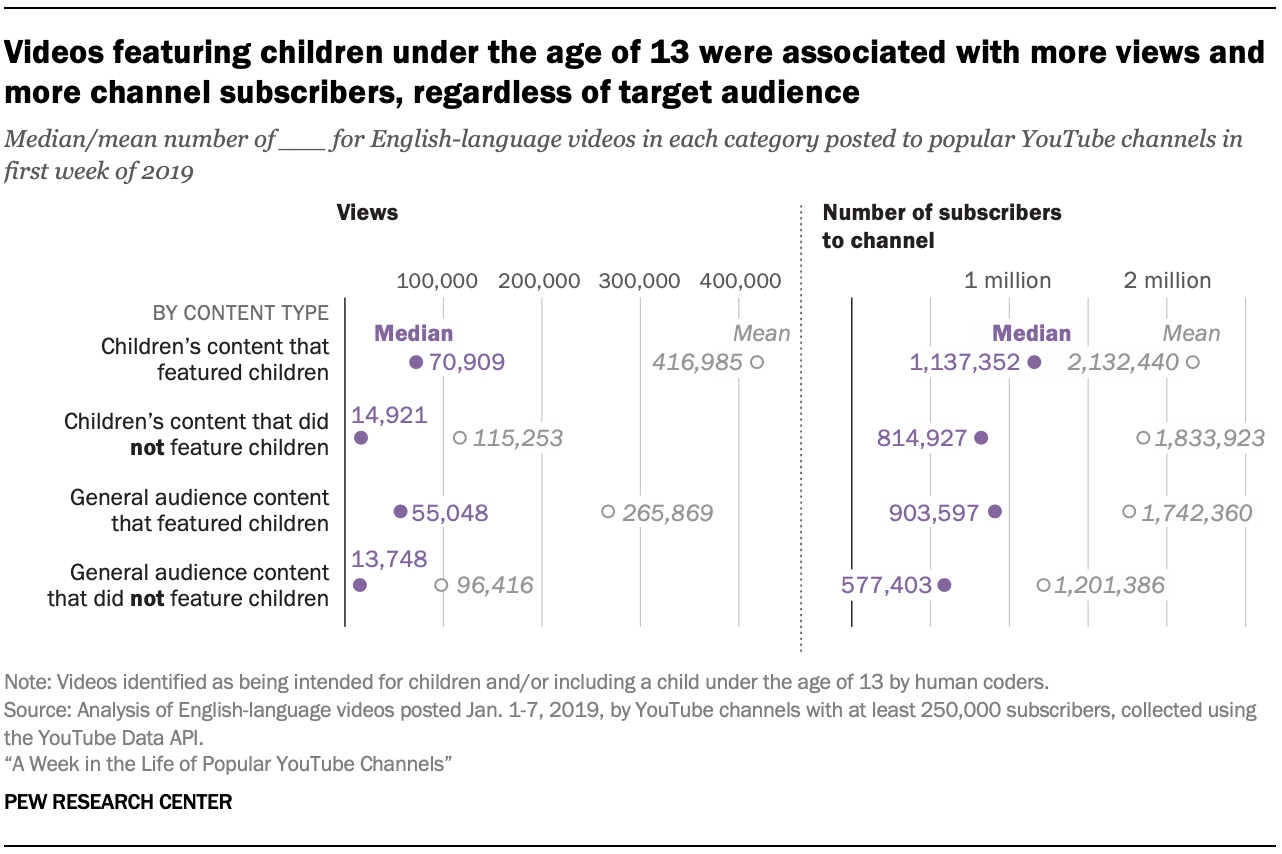 Notably, a large majority of the videos that featured children were not intended exclusively for a young audience. This analysis estimates that just 21% of videos featuring children were directed toward young children to the exclusion of other audiences. Similarly, only a minority of children’s videos (13% of those posted) contained footage of a child that appeared to be under the age of 13. But the small share of videos at the intersection of these two categories – that is, videos that were both aimed at children and featured a child under the age of 13 – were one of the single-most popular video categories captured in this analysis, averaging four times as many views (416,985 vs. 96,416) as general-audience videos that did not feature a child (70,909 vs. 13,748 median).

The majority of videos that included a child (79%) were oriented toward a general audience rather than children specifically. And while these videos were somewhat less popular than videos featuring a child that were aimed specifically to young viewers, they also received substantially more views than either children’s or general-audience content that did not feature children.

The five most-viewed individual videos intended for children that did not contain a child consisted largely of animated content, songs or nursery rhymes. As was true in the Center’s study of videos recommended by the YouTube recommendation engine, several of these videos had titles containing strings of seemingly random words that may be designed to appeal to the recommendation engine or the search terms that users typically use when looking for children’s content (e.g., “SUPERHERO BABIES MAKE A GINGERBREAD HOUSE SUPERHERO BABIES PLAY DOH CARTOONS FOR KIDS”).

Meanwhile, the five videos intended for a general audience and featuring a child that received the most views during the week of the study period were largely posted by parenting and family vlogs and included baby name reveals or new baby introduction videos. And the five most-viewed videos that were both intended for children and featured a child tended to involve children dressing up, singing or engaging in make-believe activities either alone or with adults. 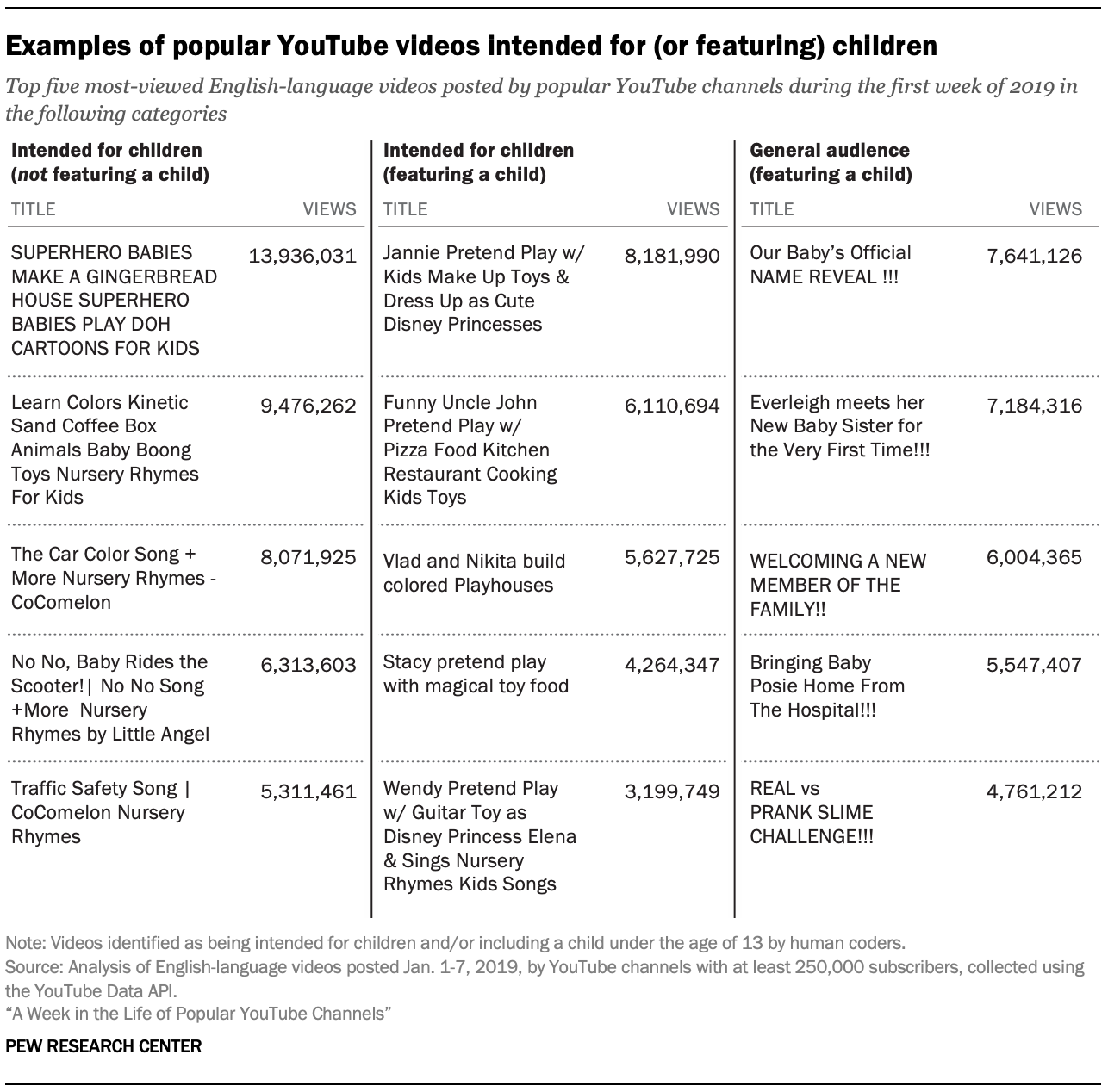 Videos about video games among the most common, most-viewed and lengthiest videos posted by popular channels on YouTube during this period

Video games were a frequent and highly watched topic on popular YouTube channels during the week, comprising the most common (non-miscellaneous) topic on the platform in this study. Many of these videos consisted of people using social gaming platforms like Twitch and Discord to stream a webcast of themselves playing video games such as Fortnite and Minecraft while they talked with their online friends. Other videos consisted of trailers for upcoming video games, as well as compilations of “fails” and other exciting or amusing moments drawn from captured video game footage. 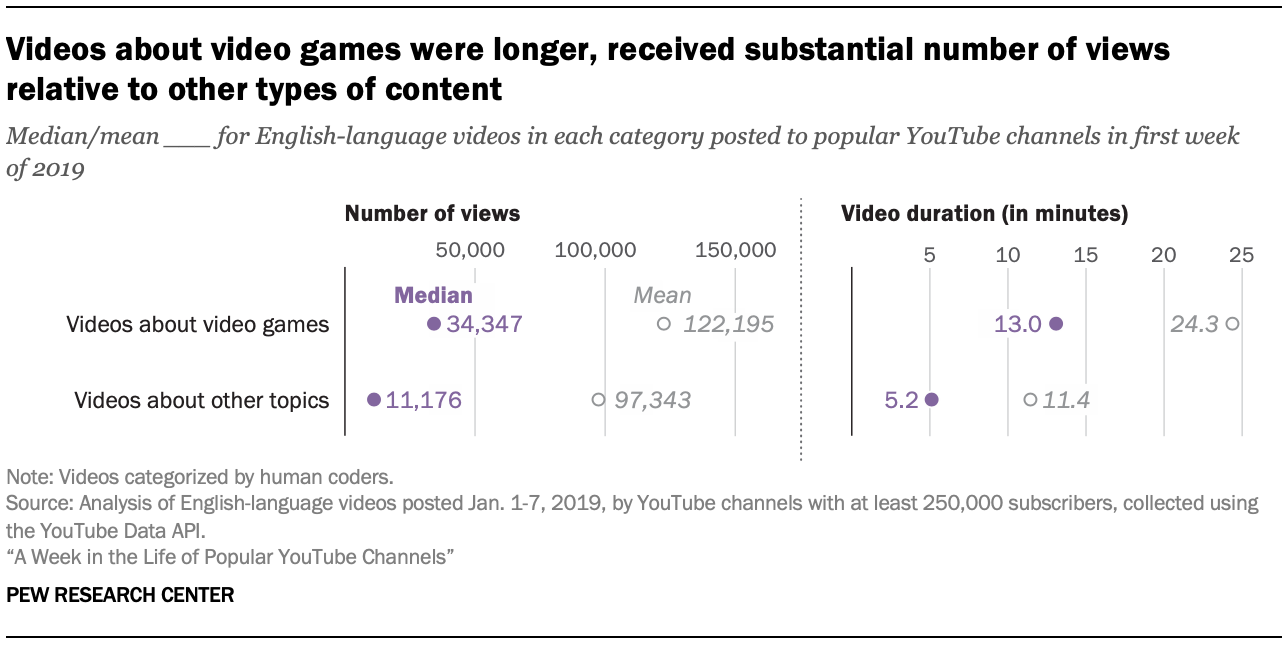 Nearly one-in-five (18%) videos uploaded by popular channels during the week pertained to video games, and these videos received an average of 122,195 views, compared with 97,343 for other types of videos. The median video game video – more representative of the typical video uploaded in the category – received nearly three times as many views as the median video for all other categories collectively (34,347 vs. 11,176). Gaming videos were also typically much longer than videos pertaining to other topics, averaging 24 minutes long (median of 13 minutes) compared with 11 minutes (median of 5 minutes) for non-gaming videos.

English-language videos relating to current events or politics tended to have an international focus, received fewer views than videos on other topics

A recent study by the Center found that the share of YouTube users who get news there nearly doubled between 2013 (20%) and 2018 (38%). This new analysis finds that videos related to current events or politics were one of the most common categories posted by these popular channels. Such videos – which include any videos with a focus on a broad set of topical issues such as government, world events, social issues, politics and local news – comprised 16% of all English-language videos uploaded during the week.5 However, just 4% of English-language videos posted by these popular channels contained content related to American current events or politics. In other words, three-quarters (76%) of English-language videos posted by popular YouTube channels that related to current events or politics did not mention events, issues, or opinions related to the United States (in either a domestic or international context). 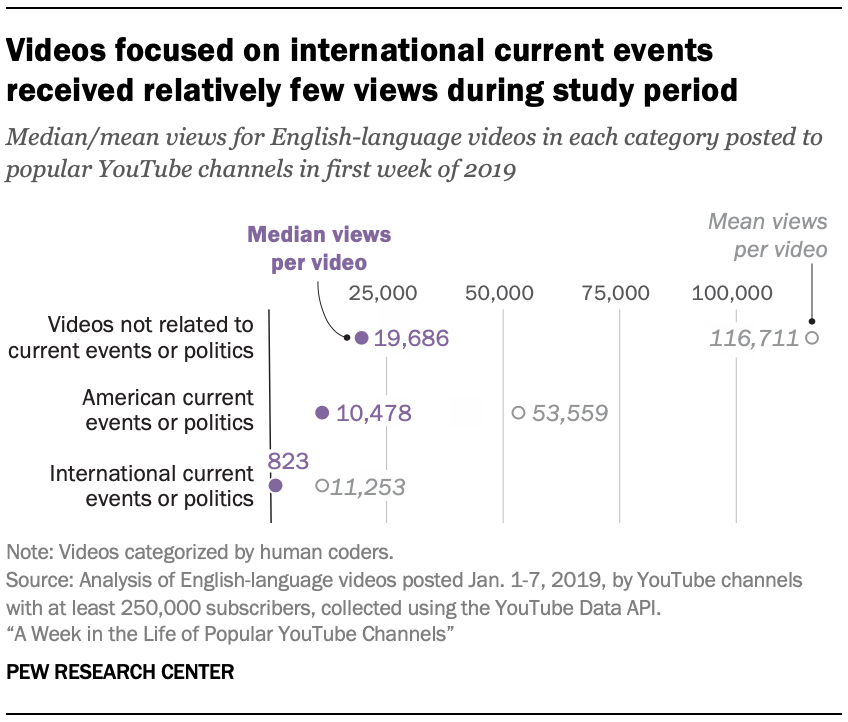 Although a large number of English-language videos related to current events or politics were posted by popular channels during the first week of 2019, these videos received on average only about one-fifth of the views that other types of videos received during that time. However, this is largely due to extremely low viewership numbers for English-language content with a focus on international events: Current events or politics videos with a U.S. focus posted by these channels received several times as many views as their international counterparts (mean of 53,559 with a U.S. focus vs. 11,253 international; medians of 10,478 and 823, respectively). Videos related to current events or politics also appeared to draw less interest over time and received fewer additional views after their initial day of publication than other types of videos, and this was especially true of videos with an international focus.

Next: 3. Certain keywords in video titles and descriptions were associated with more views
← Prev Page
Page1Page2You are reading page3Page4Page5Page6Page7Page8Page9
Next Page →

A Week in the Life of Popular YouTube Channels 1. Popular YouTube channels produced a vast amount of content, much of it in languages other than English
2. Children’s content, content featuring children and video games were among the most-viewed video genres
3. Certain keywords in video titles and descriptions were associated with more views Acknowledgments Methodology Appendix A: Most active popular channels by language Appendix B: Most popular videos in first week of 2019, by category Appendix C: 20 title keywords associated with largest increase in median views