Many YouTube videos are uploaded with attention-grabbing titles – and also with detailed descriptions that contain information about the content of the video, the video creator, and external references to related materials such as news articles or other social media accounts. In addition to the human coding content analysis described in detail in Chapter 2, Pew Research Center also conducted an exploratory analysis of these text snippets to gain additional insight into the content of videos that were posted by popular channels in the first week of 2019.6

To focus on words that represented widespread and general topics, rather than names or terms specific to particular channels, researchers collected words that were mentioned in the titles of at least 100 different videos published by at least 10 different channels (353 words met this threshold).7 From this set of words, researchers identified those terms that were associated with much higher view counts by comparing the median number of views for videos that mentioned a particular word in their titles to the median for videos that didn’t mention the word.8 This analysis reveals that videos mentioning specific keywords like “Fortnite” and “ASMR” (Autonomous Sensory Meridian Response – a popular genre on YouTube) in their titles tended to receive more views than those that did not mention those words. Similar patterns also emerged in the topical subsets of videos identified in the Center’s coding process.

Examining the 20 terms most strongly associated with greater view counts reveals a variety of patterns (for a full list of these 20 keywords, see Appendix C [link]). Some of these keywords appear to be related to particular topics that performed well during the week, including video games (“Fortnite,” “PUBG,” “FIFA,” “Roblox”), toys and children’s content (“slime,” “rainbow”), sports (“NFL,” “NBA”), and food (“eating”). Other keywords appear to represent popular video genres (“ASMR,” “moment,” “prank,” “hack,” “mystery”) and attempts to grab the attention of would-be viewers (“worst,” “ultimate,” “insane”). 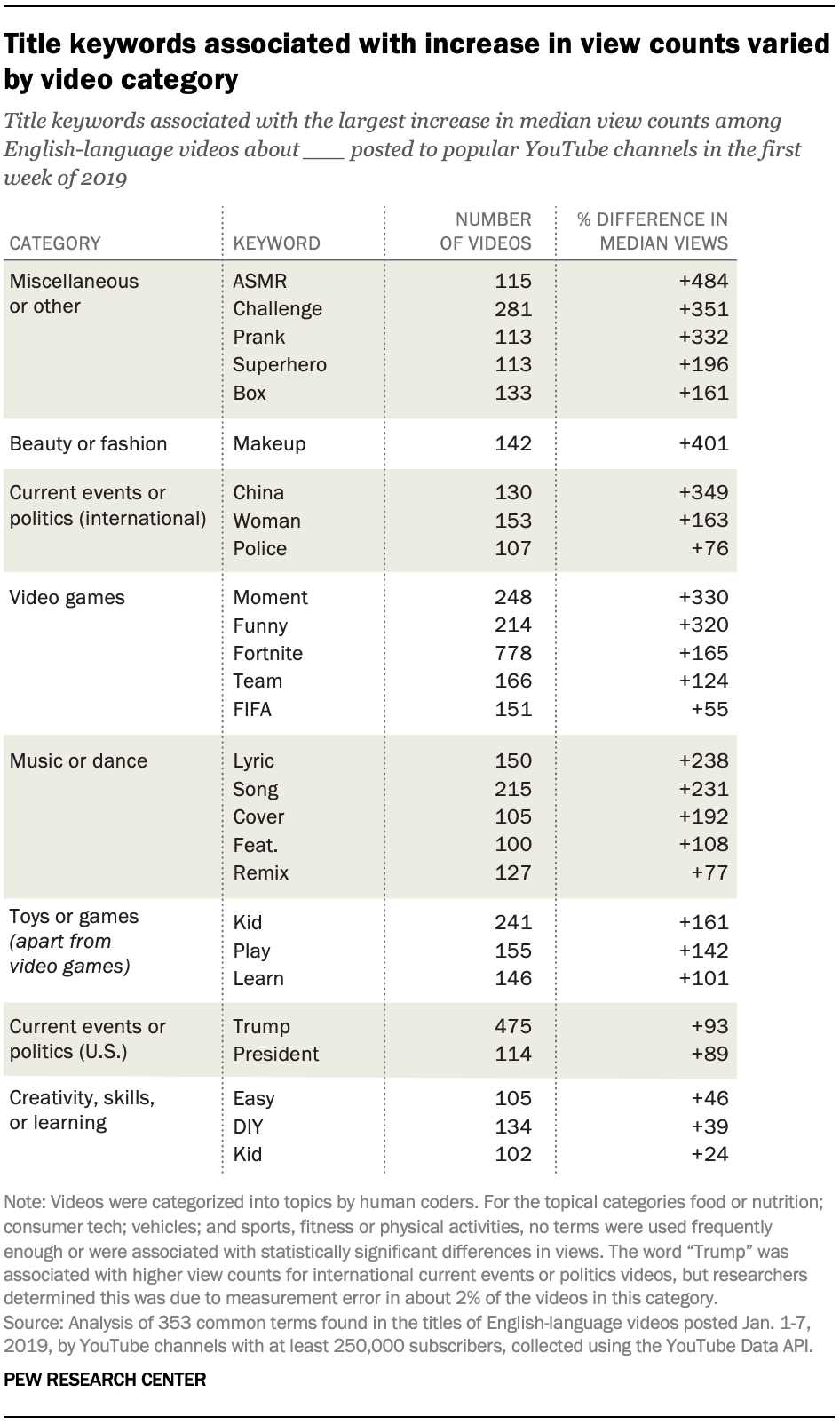 The word “Fortnite” – referring to the popular online video game – was associated with the largest increase in views out of all of the words examined, and it was also by far the most common of the top 20 most-viewed words. Videos with “Fortnite” in their title comprised 15% of all video game-related videos uploaded by popular channels during the week.

Within topical categories, certain title keywords were associated with greater number of views

In addition to examining the top keywords associated with higher view counts overall, this analysis also highlights how certain keywords are linked with greater viewership within topical areas.

In some instances, these keywords appear to highlight specific subtopics that perform especially well but that do not have broader appeal outside of that topic. For example, beauty or fashion videos were not notably more popular than other video topics overall, but videos within this topic that mentioned the word “makeup” in their titles performed especially well compared with other videos in that topic.

In other cases, specific words appear among the top keywords for videos in multiple topical areas. The word “kid,” for example, is associated with greater viewership among videos pertaining to both toys or games, as well as creativity, skills or learning. 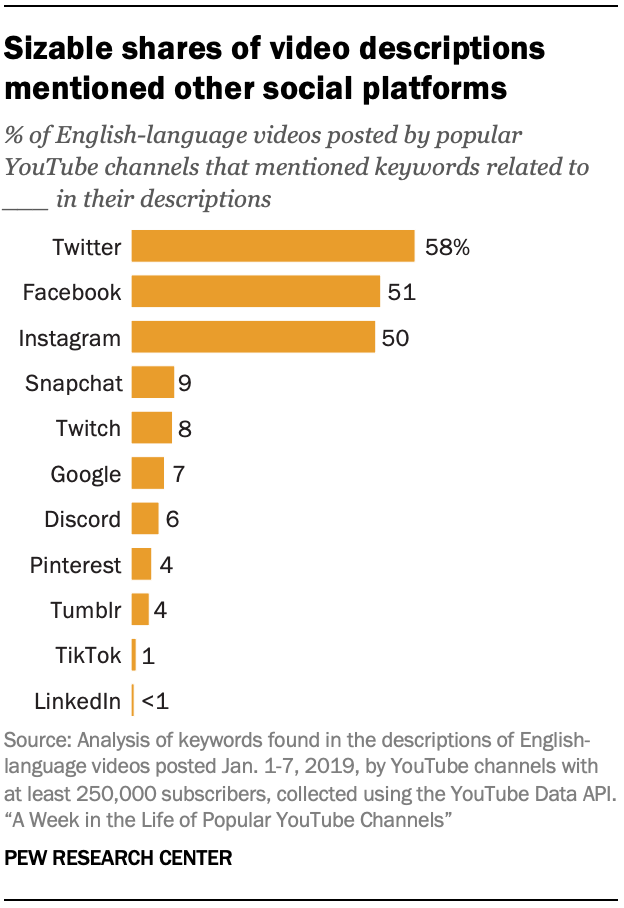 Similarly, the word “Trump” appears as a popular keyword for videos focused on U.S. politics or current events. Within the subset of English-language videos pertaining to U.S. current events or politics, just two of the 353 popular keywords examined were associated with significantly higher view counts relative to videos in this category that did not use those terms: “Trump” and “president.” Of the 1,405 English-language videos related American current events or politics posted by these popular channels during the first week of 2019, over a third (36%) mentioned one of these two words in their title, and these videos received nearly twice as many views at the median as did comparable videos posted during the same time period that did not mention Trump.9

YouTube producers often include in their video descriptions not just information about the video itself, but also links to additional online content – including their social media accounts and personal websites. Across all English-language videos uploaded by popular channels during the first week of 2019, fully 70% mentioned another prominent social media platform in their description.10 The most commonly referenced social platforms were Twitter (58% of all videos), Facebook (51%) and Instagram (50%), followed by Snapchat (9%). Social gaming services Twitch and Discord were also mentioned in the descriptions of 8% and 6% of all videos, and 34% and 21% of all video game-related videos, respectively.

A Week in the Life of Popular YouTube Channels 1. Popular YouTube channels produced a vast amount of content, much of it in languages other than English 2. Children’s content, content featuring children and video games were among the most-viewed video genres
3. Certain keywords in video titles and descriptions were associated with more views
Acknowledgments Methodology Appendix A: Most active popular channels by language Appendix B: Most popular videos in first week of 2019, by category Appendix C: 20 title keywords associated with largest increase in median views