Social media use has increased in emerging and developing nations in recent years. And, across the 11 emerging economies surveyed for this report, a median of 28% of adults say social media are very important for helping them keep up with political news and other developments happening in the world.

At the same time, opinions are divided when it comes to the reliability, bias and hateful nature of social media content when compared with other sources. And when asked about the kinds of material they encounter on these sites, majorities in most countries report at least occasionally seeing content that seems obviously false or untrue or that makes them feel negatively about groups different from them. Across almost all these measures, those who say social media are very important sources of political information see these platforms in different – and often more extreme – terms than other social media users.

In every country, many fewer people say social media are very important for helping them keep up with political events than say the same about a more traditional form of social networking – having discussions in person with people they see regularly. In every country but Mexico, a majority says in-person discussions are an important way they stay informed. Around four-in-ten or more in most countries say these conversations are very important. 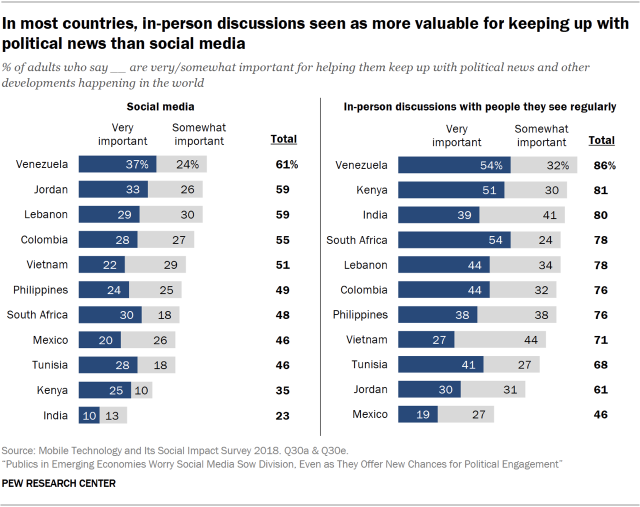 Some of the reason people place less importance on social media might stem from the fact that social media use can vary widely across these 11 countries – from a low of 31% in India to a high of 85% in Lebanon. But even among those who use these platforms, only in four of the 11 countries surveyed (South Africa, Tunisia, Venezuela and Kenya) do about half or more social media users say these platforms are very important sources for helping them keep up with political news and global happenings.

In every country, younger and more educated people are more likely to say social media are very important to them for political news.5 However, in many instances this is largely due to high levels of social media adoption among the young and more educated. Among those who say they use social media, people with higher and lower levels of education are equally likely to say these platforms are a very important source of political news in seven of these 11 countries, and the same is true of older and younger social media users in six countries.

If you haven’t watched the news today, at least you can still watch it on Facebook.MAN, 40, PHILIPPINES 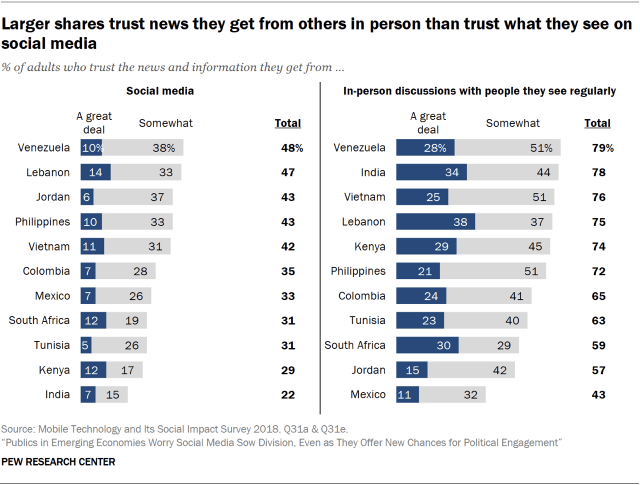 Social media users report a mix of positive and negative experiences related to the content they see on these platforms. This survey asked about the frequency with which people encounter three specific types of content on social media: content that introduces them to new ideas, that seems obviously false or untrue, or that makes them feel negatively about groups of people who are different from them. Although in no country do a majority of social media users see any of these types of content frequently, in many countries a majority reports seeing all of them at least occasionally.

A median of three-quarters of social media platform and messaging app users say they frequently or occasionally see articles or other content that introduce them to a new idea, ranging from more than eight-in-ten in Tunisia to about half in Mexico. Smaller shares see this content frequently – around four-in-ten or fewer in most countries. 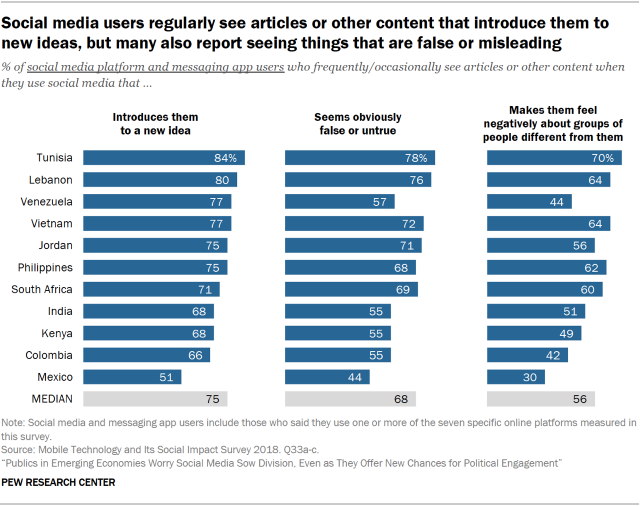 Social media users who access more than one platform are more likely than those who just use a single platform to come across all three kinds of content. The differences are especially large in Lebanon: 83% of Lebanese who access multiple social media sites regularly see articles that seem obviously false or untrue, compared with only about half (48%) of those who use a single site. In Tunisia, on the other hand, access to multiple platforms is not linked with someone’s likelihood of coming across these kinds of content. 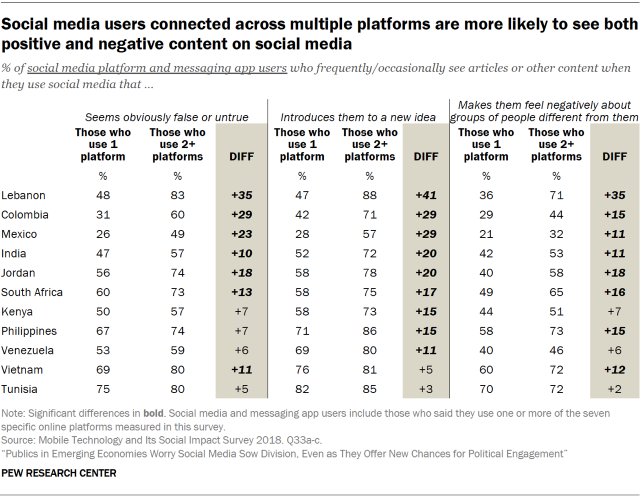 It’s bad enough that websites like Facebook already cocoon users because the author serves you information that he thinks you want to see and hear, based on what you’ve already seen and heard …. Now we learn on top of this, the information may not be true.MAN, 25, PHILIPPINES

In addition to encountering a mix of positive and negative content on these platforms, social media users in these countries also have mixed opinions about the nature of what they see on social media relative to other information sources. In most countries, larger shares say these social media platforms are more up to date, informative and focused on issues that are personally important to them. But there is much more disagreement over whether these platforms are more reliable, hateful or biased than other information sources.

[Facebook] identifies you and it sends you whatever you like the most. The information is more precise and it corresponds to your personality.WOMAN, 34, MEXICO 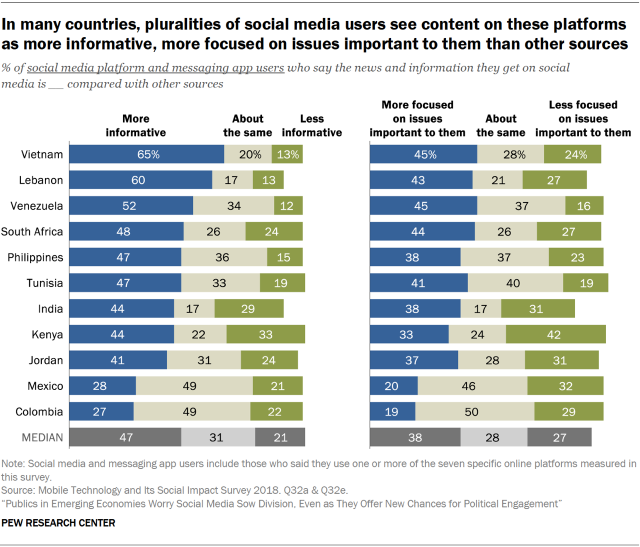 These views are closely related to one another. In every country surveyed, social media users who feel these platforms deliver content that is more personally relevant than other sources are also more likely to say social media are more informative – and the reverse is also true. 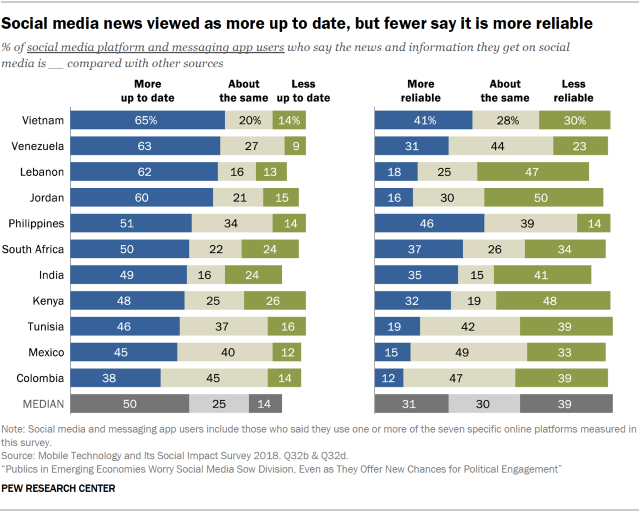 Social media users divided over whether content there is more biased, hateful than other sources

There is also a nearly even split across countries in people’s views of how hateful the news and information on social media is. A median of 31% say social media content is more hateful than content from other sources, while 30% say it is less hateful and 34% say they are about the same. Four-in-ten or more Lebanese and Colombians see more hateful content on social media than elsewhere, while similar shares of Kenyans and Vietnamese see less.

Before and during the election, there was incitement and violence and social media fueled this. … But the same social media brings togetherness and peace in this country.MAN, 26, KENYA

These attitudes vary only modestly by age and educational attainment. Larger shares of social media users with a secondary education or more say social media are more biased and hateful than other sources in Colombia, India and Mexico, but these assessments do not vary by educational attainment in the other countries surveyed. And age-related differences are even less common. Only in Mexico, Kenya and Vietnam do those ages 50 and older and those under 30 differ in their views of the bias on social media, and only in India do they differ when it comes to hatefulness. 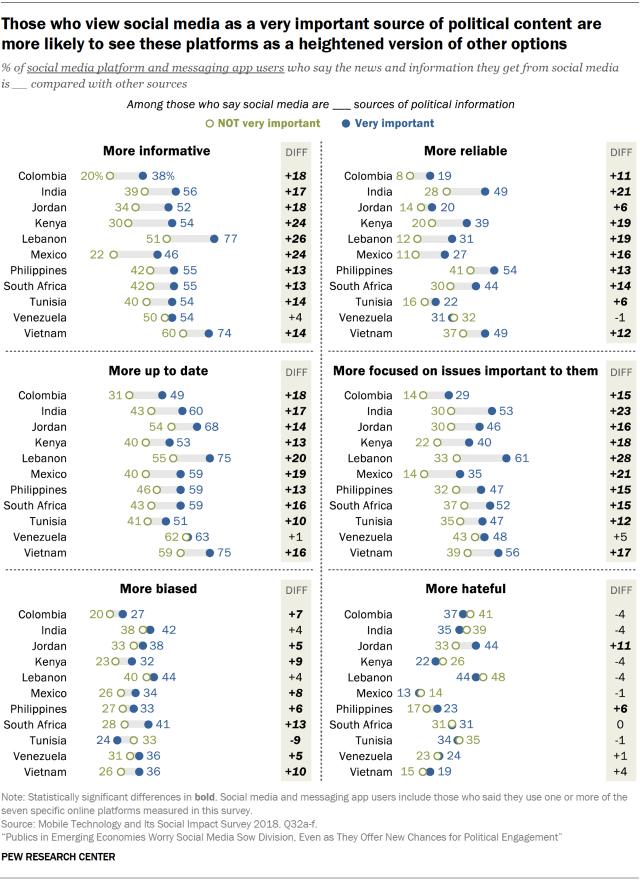 Next: 2. More people are comfortable discussing politics in person than on their phones or via social media
← Prev Page
Page1You are reading page2Page3Page4Page5Page6Page7Page8Page9
Next Page →

Publics in Emerging Economies Worry Social Media Sow Division, Even as They Offer New Chances for Political Engagement
1. Users say they regularly encounter false and misleading content on social media – but also new ideas
Fewer rely on or trust social media for political news than say the same of in-person discussionsSocial media users regularly see incorrect information and content that makes them feel negatively about other groupsUsers have mixed opinions about the nature of the content they find on social media
2. More people are comfortable discussing politics in person than on their phones or via social media 3. Publics think technology impacts the political environment in both positive and negative ways Acknowledgments Methodology Appendix A: About the focus groups Appendix B: Technology-related surveys regularly find that people see connectivity bringing positives and negatives Appendix C: Detailed tables

Smartphone Ownership Is Growing Rapidly Around the World, but Not Always Equally