The findings on frequency of internet use are based on a Pew Research Center phone survey conducted March 7-April 4, 2016, among a national sample of 1,520 U.S. adults. The margin of error for the full sample is of plus or minus 2.8 percentage points. Fully 381 respondents were interviewed on landline telephones, and 1,139 were interviewed on cellphones, including 636 who had no landline telephones.

The findings on confidence and whether people need assistance when using electronic devices is based on a phone survey of 2,752 U.S. adults conducted Oct. 13-Nov. 15, 2015. The margin of error for the full sample is of plus or minus 2.1 percentage points. Fully 963 respondents were interviewed on landline telephones, and 1,789 were interviewed on cellphones, including 1,059 who had no landline telephones.

Each of these surveys was conducted by interviewers at Princeton Data Source under the direction of Princeton Survey Research Associates International. A combination of landline and cellphone random-digit-dial samples were used; both samples were provided by Survey Sampling International. Interviews were conducted in English and Spanish. Respondents in the landline sample were selected by randomly asking for the youngest adult male or female who was at home. Interviews in the cellphone sample were conducted with the person who answered the phone, if that person was 18 years of age or older. For detailed information about our survey methodology, visit: https://www.pewresearch.org/methodology/u-s-survey-research/

The combined landline and cellphone samples are weighted using an iterative technique that matches gender, age, education, race, Hispanic origin and nativity, and region to parameters from the 2013 Census Bureau’s American Community Survey and population density to parameters from the Decennial Census. The sample also is weighted to match current patterns of telephone status (landline only, cellphone only or both landline and cellphone) based on extrapolations from the 2014 National Health Interview Survey. The weighting procedure also accounts for the fact that respondents with both landlines and cellphones have a greater probability of being included in the combined sample and adjusts for household size among respondents with landline phones. The margins of error reported and statistical tests of significance are adjusted to account for the survey’s design effect, a measure of how much efficiency is lost from the weighting procedures.

The data on perceptions of technology’s impact on society is from a survey conducted as part of the American Trends Panel (ATP), created by Pew Research Center, a nationally representative panel of randomly selected U.S. adults living in households. Respondents who self-identify as internet users and who provided an email address participate in the panel via monthly self-administered web surveys, and those who do not use the internet or decline to provide an email address participate via the mail. The panel is being managed by Abt SRBI. Data in this report are drawn primarily from the March wave of the panel, conducted March 2-28, 2016, among 4,726 respondents (4,243 by web and 483 by mail). The margin of sampling error for the full sample of 4,726 respondents from the March wave is plus or minus 2.2 percentage points.

Members of the American Trends Panel were recruited from two large, national landline and cellphone random-digit-dial (RDD) surveys conducted in English and Spanish. At the end of each survey, respondents were invited to join the panel. The first group of panelists were recruited from the 2014 Political Polarization and Typology Survey, conducted from Jan. 23 to March 16, 2014.

The margin of error for the Sept. 29-Nov. 6, 2016, survey is plus or minus 2.0 percentage points. The following table shows the unweighted sample sizes and the error attributable to sampling that would be expected at the 95% level of confidence for different groups in the survey: 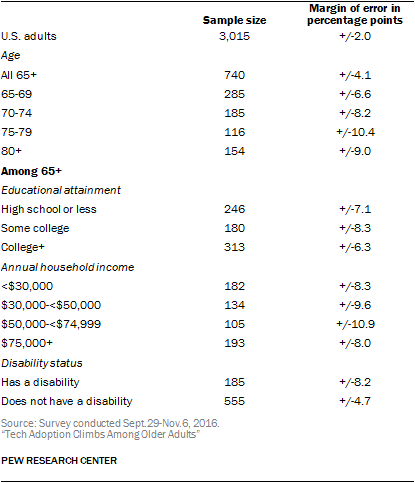 Tech Adoption Climbs Among Older Adults 1. Technology use among seniors 2. Barriers to adoption and attitudes towards technology Acknowledgments
Methodology