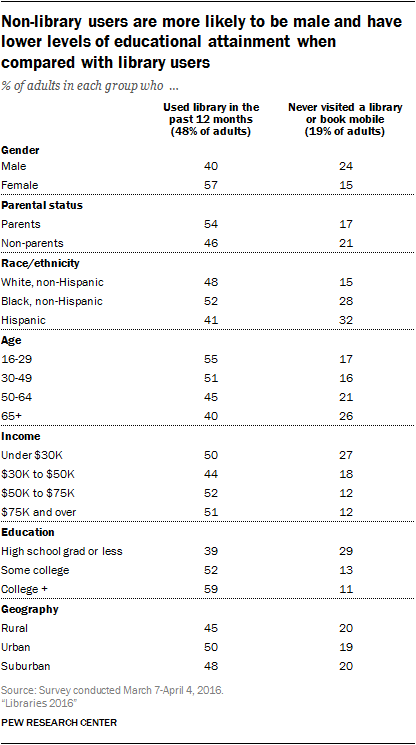 Nearly half (48%) of Americans visited libraries in the past year. Roughly a third (32%) say they have used libraries at one time or another, though not in the past 12 months. Additionally, one-in-five (19%) say they have never visited a public library or a bookmobile. This has been a persistent trend in Pew Research Center surveys for five years, and we consistently see patterns in who these non-users are and how their views about libraries differ from more recent library users.

Those who have never been to a public library are more likely to be male (24% have never been to a library), ages 65 and older (26%), Hispanic (32%), black (28%), high school graduates or less (29%), or living in households earning less than $30,000 (27%). At the same time, the data show there are members of other demographic groups that have had no direct experience with libraries, including: 11% of those with college degrees and 12% of those in households earning $75,000 or more. Additionally, one-in-six parents of minor children (17%) say they have never been to a public library. 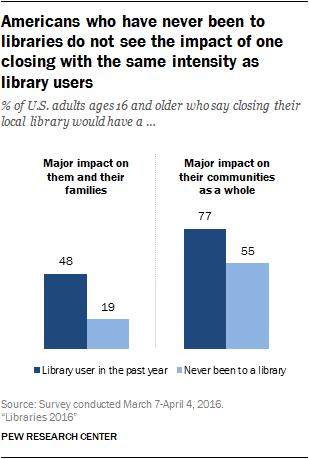 Despite the fact that they have no direct personal experience with libraries, many who have never been have relatively positive and affirming views about libraries, even though their level of enthusiasm is not as high as recent library goers. Recall that 77% of all Americans age 16 and above say libraries provide them with the resources they need. For those who have never used libraries, nearly two-thirds (65%) agree with this, possibly because other friends and family members get materials from libraries that are helpful. At the same time, 90% of those who are recent library goers say public libraries provide the resources they need.

As to attitudes about libraries, the main difference between library users and non-users has to do with trust and information. People who have used libraries in the past year are more likely than others to say that libraries are a resource that can help them decide what information to trust. Some 43% of library users say they agree “a lot” that libraries are a place that helps people decide what information to trust, while 29% of those who have never been say this. Again, this might stem from the possibility that non-users gain access to library resources through family and friends who are active library users.

Libraries 2016 1. Americans’ attitudes toward public libraries 2. Library usage and engagement
3. A portrait of those who have never been to libraries
Acknowledgments Methodology