Libraries have been in flux since the dawn of the digital age. They face changes in the materials they provide, in use of their services, in the composition of their patron populations, and in demands for new services. It is a set of disruptions as far-reaching and disorienting as the changes that are occurring in the news media as the nature of news is redefined and its distribution mechanisms are revolutionized.

Pew Research Center has been tracking these changes through surveys, especially in library usage patterns, since 2011.

The 2016 survey shows that, within the context of evolving library usage patterns, public attitudes are largely positive about the library’s role in communities. Many Americans are interested in libraries offering a range of services – including those that help people improve their digital skills and learn how to determine what information is trustworthy. People think that libraries are a major contributor to their communities in providing a safe place to spend time, creating educational opportunities for people of all ages, and sparking creativity among young people.

Overall, a large majority of Americans age 16 and older (77%) think libraries provide them with the resources they need. This is especially true for young people: 84% of those between the ages of 16 and 29 say this. 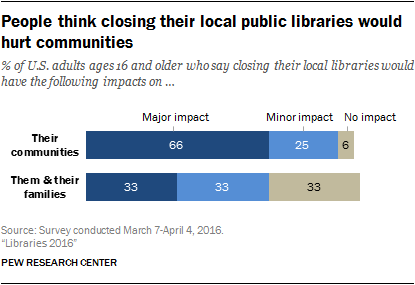 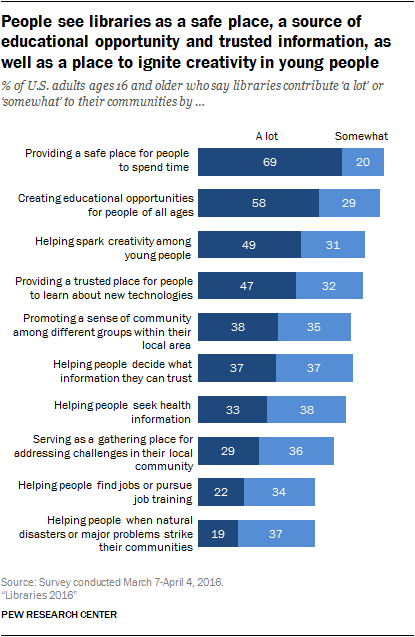 Opportunity is also a notion that comes to people’s mind in thinking about libraries – whether that means a safe place to spend time, a place to pursue educational opportunity, or a place where creative juices flow. Those ages 16 and older were asked to consider how much their local public libraries contribute to their communities: 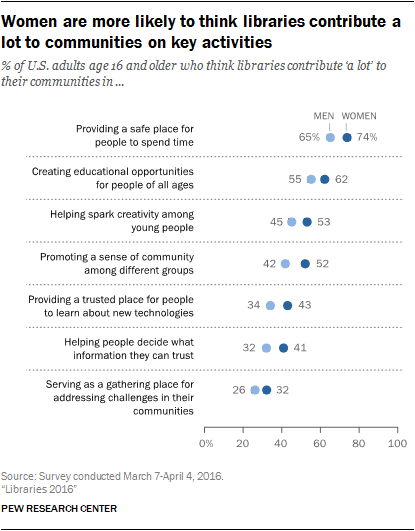 Women are more likely than men to think that libraries make several of these contributions to their communities, including providing a safe place (74% of women say libraries help do this “a lot” vs. 65% of men), providing a trusted place for helping people learn about new technologies (52% vs. 42%) and helping people decide what information they can trust (41% vs. 32%). These gender differences might result from the fact that women are more likely than men to have used libraries in the past year.

When asked to think about how libraries might change to better serve the public, Americans have a pretty clear message: help people learn digital skills without neglecting traditional functions. Specifically:

Next: 2. Library usage and engagement
← Prev Page
Page1You are reading page2Page3Page4Page5Page6
Next Page →

Libraries 2016
1. Americans’ attitudes toward public libraries
2. Library usage and engagement 3. A portrait of those who have never been to libraries Acknowledgments Methodology