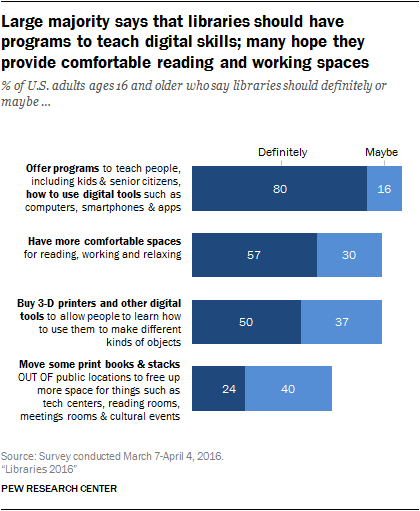 Most Americans view public libraries as important parts of their communities, with a majority reporting that libraries have the resources they need and play at least some role in helping them decide what information they can trust. When asked to think about the things that libraries could do in the future, notable numbers of Americans respond in a way that can be boiled down to one phrase: “Yes, please.”

Yet, Americans are also divided on a fundamental question about how books should be treated at libraries: 24% support the idea of moving books and stacks in order to make way for more community- and tech-oriented spaces, while 31% say libraries should not move the books to create such spaces. About four-in-ten think libraries should maybe consider doing so.

A Pew Research Center telephone survey of 1,601 Americans ages 16 and older conducted from March 7 to April 4, 2016, finds that Americans continue to express largely positive views about the current state of their local public libraries. For instance, around three-quarters (77%) say that public libraries provide them with the resources they need. And 66% say the closing of their local public library would have a major impact on their community ­ although notably, just 33% say this would have a major impact on them personally or on their family.

There is also a growing sense that libraries can help people decide what information they can trust: 37% of Americans feel that public libraries contribute “a lot” in this regard, a 13-point increase from a survey conducted at a similar point in 2015. 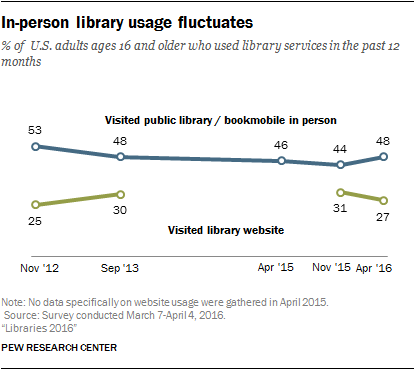 As in past Pew Research Center surveys of library use, the April 2016 survey also measured Americans’ usage of and engagement with libraries. Overall, 53% of Americans age 16 or older have had some interaction with a public library in the past year – either through an in-person visit, using a library website, or via a mobile app. Some 48% of adults specifically visited a library or bookmobile in the past 12 months, a modest uptick from the 44% who said that in late 2015. There was a four-point drop, though, in the number who visited library websites in the previous 12 months – falling from 31% who said they’d done so in 2015 to 27% in 2016.

What to do with the books at the library? The public is not settled on this 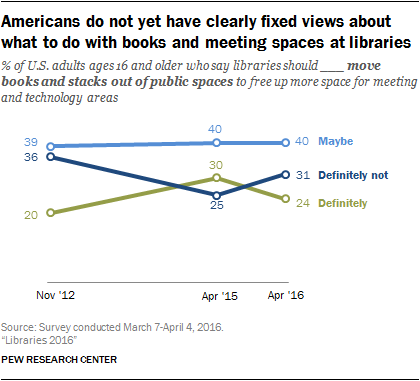 Last year, Pew Research Center reported a growth in public support for libraries moving some books and stacks out of the public spaces in libraries and instead creating meeting areas or technology spaces. Nearly one-third (30%) in 2015 said libraries should definitely move books out of public spaces in favor of using that space for other purposes, an increase from 20% in 2014. However, the 2016 survey recorded another shift, as the number of people age 16 and older who said this fell six points to 24%. Correspondingly, the share saying libraries should definitely not move books increased in 2016 to 31%, up from 25% last year.

The one figure that did not change, which reflects the tentativeness people may bring to thinking about this issue, is the share of people who say libraries maybe should move books and stacks from public places. A plurality (40%) said this in 2016, the same share who has said this since 2012.

There are a range of findings in the survey that might be surprising to those who are not deeply versed about events in and around libraries:

Next: 1. Americans’ attitudes toward public libraries
← Prev Page
You are reading page1Page2Page3Page4Page5Page6
Next Page →

Libraries 2016
1. Americans’ attitudes toward public libraries 2. Library usage and engagement 3. A portrait of those who have never been to libraries Acknowledgments Methodology