Mechanical Turk is a website owned and operated by Amazon since its creation in 2005. The name comes from an 18th century chess-playing device commissioned by Austrian Empress Maria Theresa. Challengers competed against the Turk, believing they were competing against an automated machine. However, the Turk was an illusion. Challengers were led to believe they were playing a mechanized device, when in fact they were competing against a person hidden inside. 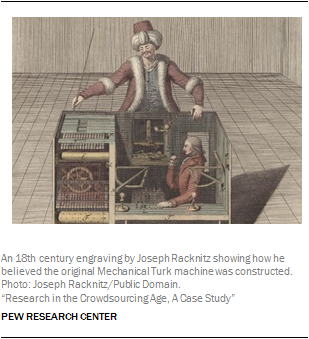 The Mechanical Turk website was the idea of Amazon chief executive Jeff Bezos, who believed a platform could be created to exploit the fact that humans can easily perform certain tasks that were difficult for computers. He predicted there was a business to be built around connecting those who wanted research done with those who were willing to do it. By creating the Mechanical Turk marketplace, Bezos tried to create a phenomenon he called “artificial artificial intelligence.”

“Normally, a human makes a request of a computer, and the computer does the computation of the task,” Bezos told The New York Times in 2007. “But artificial artificial intelligences like Mechanical Turk invert all that. The computer has a task that is easy for a human but extraordinarily hard for the computer. So instead of calling a computer service to perform the function, it calls a human.”

In the past decade, researchers from many different fields have come to use the site as a way to get tasks completed in an efficient and inexpensive manner. Pew Research Center decided to conduct research about Mechanical Turk because it is one of the largest such operations and because it has become a common source of research in both the academic and business worlds.

How the marketplace works 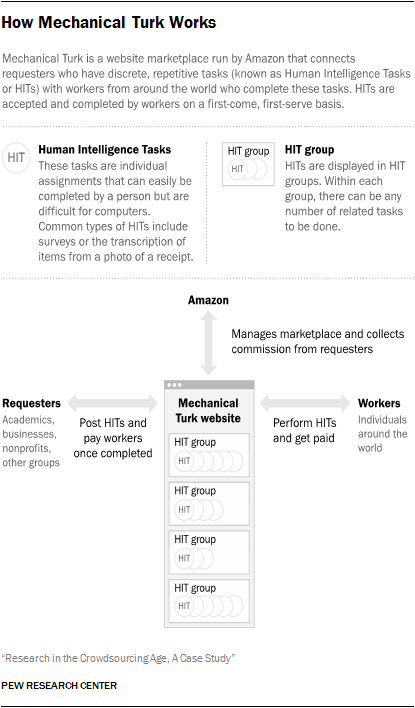 The structure of Mechanical Turk is designed to make it easy to access and use. An organization, company or person conceives a task – often a repetitive one that could be described as a “microtask” – for a person to perform. That group or individual becomes a requester by posting the task on MTurk as a HIT (Human Intelligence Task). On the post, the requester includes directions for how to complete the task, the amount of reward they are offering and the qualifications needed for workers to participate. In addition to paying those who complete the tasks, requesters pay an additional percentage as a commission to Amazon.

The level of reward a Turker earns varies depending on specifics of the assignment. Payments for individual tasks can range from free to as much $60. However, Pew Research Center’s study of a typical week of work revealed that the majority of tasks (61%) paid $10 cents or less each.

HITs are displayed on the site in HIT groups. Within each HIT group, there can be any number of related HITs to be completed. For example, a company might want humans to record the contents listed on a picture of a receipt from a retail store. If they have 200 receipts, they can create a single HIT group that contains 200 HITs. The MTurk search screen will show only one HIT group, although it will also list the number of HITs available in that group. Any number of people can click on the group and perform the tasks. That HIT group might be completed by 50 or 100 people, each working on several different receipts.

HITs are accepted by workers on a first-come, first-serve basis. Popular tasks are completed in hours, while other tasks may stay on the site for months. Experienced Turkers have developed a number of ways to identify quickly the best paying tasks.

To become a worker on the site, a person must register with Amazon. That person immediately becomes eligible to “accept” HITs and earn money.

The types of tasks on the site vary greatly. Among other things, Turkers are asked to participate in surveys, transcribe movies and copy text from images. 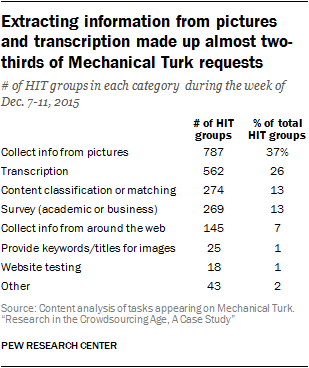 The Center’s investigation of the tasks posted in December 2015 showed that the most common task consisted of workers recording information appearing in an image – often a sales receipt. More than a third of HIT groups (37%) fell into this category. The second largest assignment, at 26%, involved the transcription of audio or video files.

For a new worker, it is difficult to know how long any particular task will take. Each HIT group has the reward posted and the amount of time the worker is given to complete the task. However, the time allotted is often much longer than the time needed.

Over time, workers can earn qualifications that enable them to participate in a wider variety of assignments. Workers earn these qualifications by fulfilling requirements, which usually involve the completion of a specific test or a characteristic of the worker’s location or age.

Like in many online marketplaces in the sharing economy, Turkers have developed their own, independent ways to evaluate tasks and requesters. Online forums such as Turkopticon and mturk forum allow users to share their experiences. Workers can rate requesters on how quickly they paid and how complicated the tasks were. There are even sites like turkalert that send emails to users whenever their favorite requesters post a new assignment.

Next: 2. The size of the Mechanical Turk marketplace
← Prev Page
Page1You are reading page2Page3Page4Page5Page6Page7
Next Page →

Gig Work, Online Selling and Home Sharing
Social Media and the Workplace
The State of Gig Work in 2021