The widespread adoption of various digital technologies by today’s teenagers has added a modern wrinkle to a universal challenge of parenthood – specifically, striking a balance between allowing independent exploration and providing an appropriate level of parental oversight. Digital connectivity offers many potential benefits from connecting with peers to accessing educational content. But parents have also voiced concerns about the behaviors teens engage in online, the people with whom they interact and the personal information they make available. Indeed, these concerns are not limited to parents. Lawmakers and advocates have raised concerns about issues such as online safety, cyberbullying and privacy issues affecting teens.

A Pew Research Center survey of parents of 13- to 17-year-olds finds that today’s parents1 take a wide range of actions to monitor their teen’s online lives and to encourage their child to use technology in an appropriate and responsible manner. 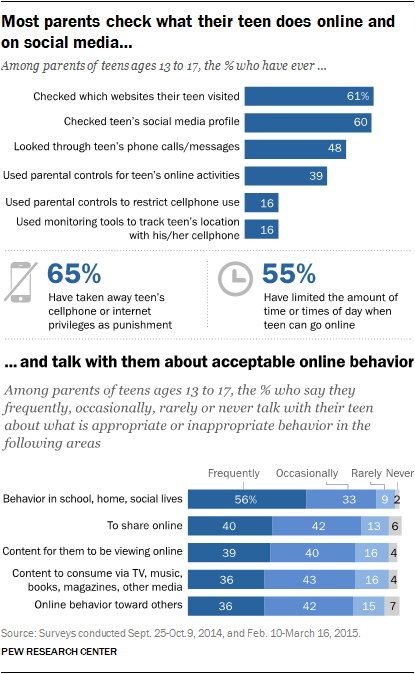 Moreover, digital technology has become so central to teens’ lives that a significant share of parents now employ a new tool to enforce family rules: “digitally grounding” misbehaving kids. Some 65% of parents have taken their teen’s cellphone or internet privileges away as a punishment.

But restrictions to screen time are not always consequences of bad behavior, parents often have rules in place about how often and when their teen can go online. Some 55% of parents say they limit the amount of time or times of day their teen can be online.

But even as parents use a number of these hands-on methods to monitor their teen, they are relatively less likely to use technology-based tools to monitor, block or track their teen. This is a consistent pattern that has also emerged in previous Pew Research Center surveys of technology use by parents and teens. For instance, the new survey results show:

In addition to taking a range of steps to check up on their teen’s online behavior, the vast majority of parents also try to take a proactive approach to preventing problems by speaking with their teen about what constitutes acceptable and unacceptable online behavior. Specifically:

A note about the findings in this survey

These findings are based on a national survey of parents of teens ages 13 to 17, conducted Sept. 25-Oct. 9, 2014, and Feb. 10-March 16, 2015. One parent and one teenage child participated in each survey. If a parent had more than one child in the specified age range, one teen in the household was randomly selected for the survey. The data in this report about parenting behavior pertain specifically to parenting behavior towards the specific teen who also completed the survey.

This report differs from Pew Research Center surveys of parents and technology conducted prior to 2014 in that this survey was administered using an online panel to a nationally representative cohort of teens. Pre-2014 surveys of teens and technology were conducted via telephone, cellphones as well as landlines. Due to differences in modes, figures presented in this report will not be directly compared to Pew Research Center studies of teens conducted prior to 2014.

At the same time, there are a number of broad trends that resonate in both our current and previous work. As in past Pew Research Center studies, this research finds that a majority of parents report discussing acceptable online behavior with their teen as well as checking up on what websites their teen visits. Meanwhile, the share of parents who use more technologically oriented methods, like parental monitoring software, to monitor their teen’s digital life continues to remain comparatively low.

Next: 1. How parents monitor their teen’s digital behavior
← Prev Page
You are reading page1Page2Page3Page4Page5Page6
Next Page →