In addition to examining the actions parents take to monitor their teen’s internet and cellphone use, Pew Research Center also asked parents how often they talk with their teen about appropriate and inappropriate behavior in various spaces, from what they share and view online to how they treat others online or conduct themselves in their everyday lives. 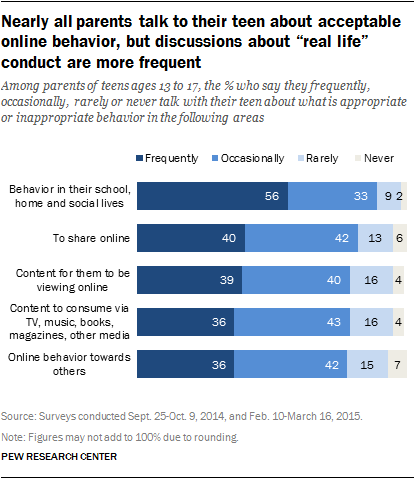 When it comes to guiding their teen about making the right decisions, parents discuss “real life” behaviors somewhat more often than online behavior. Virtually all parents – 98% – report ever speaking with their teen about what is appropriate or inappropriate conduct in school, at home and in their social lives, with 56% saying they have these conversations frequently.

Other research shows a similar pattern of parents using personal conversations to inform teens of how to conduct themselves online. According to a 2015 Common Sense Media report, a majority of teens say their parents have talked with them about online safety and responsibility.2 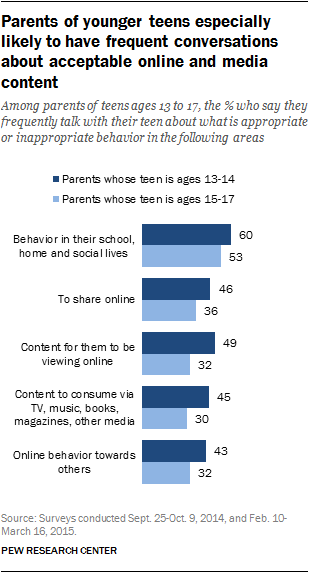 Parents of younger teens are more likely than parents of older teens to speak with their child about appropriate and inappropriate behavior in a variety of online and offline spaces – and this is especially true when it comes to discussions about online and media content.

Half (49%) of parents of 13- to 14-year-olds say they frequently talk with their teen about what types of online content are acceptable for them to view, compared with 32% of parents whose teens ages 15 to 17. Parents of younger teens are also significantly more likely to frequently talk with their child about what is appropriate to share online, types of media to consume and online behavior towards others. 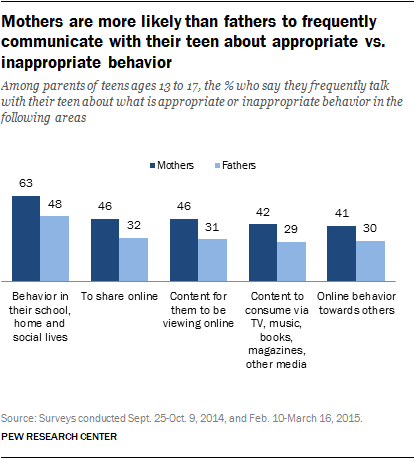 In general, mothers and fathers report taking similar steps to monitor their teen’s digital behavior. However, mothers tend to have more frequent conversations with their teen when it comes to outlining appropriate behavior – online as well as offline.

While there are relatively few differences based on income and educational attainment in terms of how parents oversee their teen’s online and mobile behavior, parents that are less affluent and have lower levels of educational attainment are more likely to speak regularly with their teen about the do’s and don’ts of both the online and offline world.

Among parents whose annual household income is less than $30,000, nearly two-thirds (63%) report frequently speaking with their teen about the right and wrong way to behave in school, at home and in their social lives. This is the same share as those living in households earning $30,000-74,999 yearly. In contrast, 49% of parents in households earning $75,000 or more per year frequently discuss this issue with their child. Similar differences can be seen when it comes to conversations about what teens share and view online, the media they consume and how they treat others online.

In addition, parents who have not attended college are more likely than those with a bachelor’s or advanced degree to frequently talk with their teen about their online and offline activities.

The biggest gap relates to appropriate online content, as some 47% of parents with a high school diploma or less say they frequently speak with their teen about the type of online content they view (compared with 34% of those with at least a college degree).

Parents with less formal education are also more likely than those with a bachelor’s degree or more to say they frequently speak with their teen about what is appropriate to share online (44% vs. 35%), appropriate traditional media content (41% vs. 35%), or their online behavior towards others (42% vs. 34%). 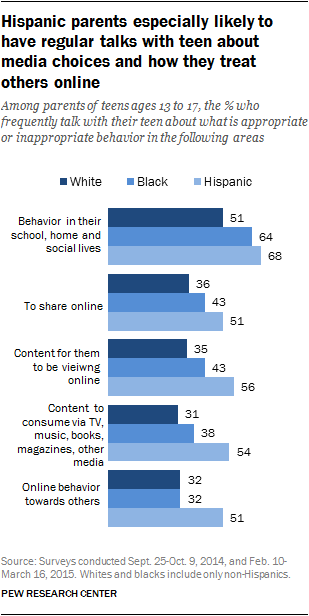 Parental monitoring of teen’s online and mobile activities tends to vary little by race and ethnicity. There are differences, however, in how often parents of different racial and ethnic backgrounds engage in conversations about appropriate online and offline behavior.

These findings are in line with a recent Common Sense Media report of American youth, which found that Hispanic adolescents were more likely than whites to report that their parents talk about when they can use media, how much media time they are allowed and how to be respectful and responsible on the web.

Meanwhile, both Hispanic and black parents are more likely than whites to report frequently speaking with their teen about appropriate behavior in school, at home and in their social lives.

Although this survey did not ask parents for specific reasons why they communicate with their teen about certain topics, minority teens tend to go online with greater frequency compared with whites, which may impact the frequency of parental discussions about online behavior. A 2015 Pew Research Center report found that 34% of black teens and 32% of Hispanic teens say they go online “almost constantly,” compared with 19% of white teens. Another Pew Research Center study from late 2015 found that Hispanic parents tend to worry more than white or black parents on a number of measures, including bullying.

For most parents, the phone is the default device for quickly getting in touch with their teen 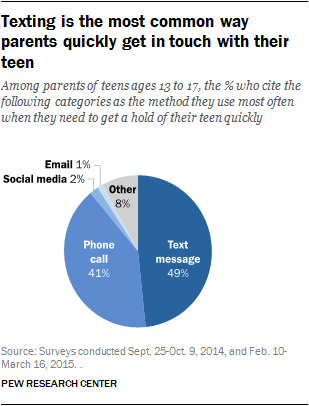