While most Americans support greater limits on data collection by the government and most express low levels of confidence in the capacity of institutions with which they interact on a daily basis to protect their data, few are taking advanced steps to change their behavior or cloak their activities online. The adoption of certain privacy-enhancing tech tools such as using proxy servers and adding privacy-enhancing browser plug-ins has been low, and respondents have stated a variety of reasons for avoiding these measures.

However, other efforts that entail less technical forms of opting-out of data collection are much more widespread. These include activities such as refusing to provide information that isn’t relevant to a transaction and creating personal data “noise” by giving misleading or inaccurate information.

A very small number say they have changed their behavior to avoid being tracked recently, but many were already engaged in more common or less technical privacy-enhancing measures.

At the time of the survey, the vast majority of respondents—91%–had not made any changes to their internet or cellphone use to avoid having their activities tracked or noticed. Only 7% reported that they had made these kinds of changes in “recent months.”

At the same time, a much larger group had engaged in an array of everyday obfuscation and privacy-enhancing measures. These activities were not necessarily in direct response to news of government monitoring programs, but rather, represent a broad set of measures that respondents may have engaged in. They include:

There are relatively few demographic variations for these questions, with several notable exceptions. Younger adults under the age of 50 are twice as likely as older adults to say they have given misleading or inaccurate information (30% vs. 16%). This younger group is also somewhat more likely to say they have deleted or edited something they posted in the past (36% vs. 21%) or asked someone to remove something posted online (15% vs. 7%). Women are more likely than men to have requested that online information be removed (16% vs. 6%).

Advanced measures, such as the use of proxy servers and encryption are less common.

This survey included somewhat more expansive questions about advanced privacy-enhancing measures such as the use of proxy servers, virtual private networks and encryption across a variety of communications channels, following up on findings reported earlier this year. However, even with comparatively broader language, just one-in-ten Americans said they had adopted these more sophisticated steps to shield their information:

Awareness of government monitoring programs is associated with some privacy-enhancing behaviors.

When looking at levels of surveillance awareness, engagement in privacy-enhancing activities does not vary in significant ways for most activities with several exceptions. Americans who have heard “a lot” about the programs are more likely than those who have heard just “a little” to:

Americans continue to value ability to be anonymous in certain online activities.

Across multiple surveys, a majority of the public has indicated that the ability to be anonymous online is important to them. In the current survey, the majority of adults (55%) said that people should have the ability to use the internet completely anonymously for certain kinds of online activities. Another 16% do not think people should be able to remain anonymous when they are online, and 27% said they “don’t know.” 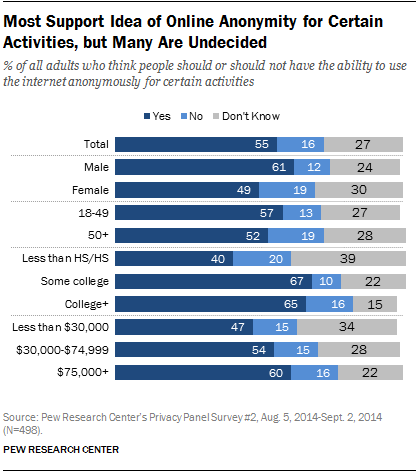 Men are more likely than women to think people should be able to engage in certain online activities anonymously (61% vs. 49%), but support for internet anonymity does not vary by age. Education is a predictor, but income is not; adults with at least some college education are significantly more likely than those who have not attended college to believe that people should have the ability to use the internet anonymously (66% vs. 40%).

As a follow-up question, respondents were asked: Could you please tell us briefly why you think that people should or should not have the ability to use the internet completely anonymously? The open-ended responses that followed were varied in both length and substance, but tended to cluster around several recurring threads that are examined below.

Why people support the idea of anonymity for some online activities.

A large share of respondents who support anonymity referred to key phrases associated with privacy that were similar to those discussed in the first report from this series. In their explanation of why anonymity was important to preserve, they noted that people have a “right to privacy” or it’s “no one’s business” what they do online.

Another substantial share cited the idea that as long as a person’s online activity does not present a threat to others, that they should have the ability to use the internet completely anonymously for certain kinds of online activities:

Could you please tell us briefly why you think that people should have the ability to use the internet completely anonymously?

“As long as it’s not an illegal activity, a person should not have to worry about being spied on.”

“There are activities which are not considered socially acceptable in certain circumstances, which create no harm to other people.”

“As long as no criminal activity is involved, why should anyone’s browsing history be tracked if they don’t want it tracked?”

“There is a basic right to privacy as long as the activity does not endanger others. The trick is to distinguish the activities.”

A range of responses also noted that anonymity is essential to ensure freedom of expression and that certain activities are compromised without the ability to remain anonymous online.

“Anonymity is the first line of protection for free speech.”

“I think that the internet needs to remain free and anonymous for it to be a place where people can exchange ideas and information without fear. If your digital life can be monitored and saved then you are at the mercy of whoever ends up with enough money and power to use that information.”

“People like to research different things. Just because I may look up a topic doesn’t mean I am a terrorist.”

“For example, you search for information regarding a medical condition. Within minutes, you are being bombarding with advertising for drugs. Now there are multiple companies that know you are interested in a particular medical condition and they assume you have it. I think you should have the privacy to not have everything you search dumped into an advertising targeting system.”

At the same time, another category of responses presented exceptions to the general idea that people should be able to use the internet anonymously for certain activities:

“I think the ability to track an individual’s activity online (but also on phones, etc) creates a real dilemma in the U.S. –we value our freedom and don’t want “the government” telling us what to do – and what not to do (e.g. Russia, the Middle East) BUT –having lived through 9/11 terrorism…we understand the value of monitoring activity(…).

“Some uses are acceptable, not all. (…) Reading news/magazines online is no different than buying the item on the news stand.”

Why some people oppose the idea of online anonymity.

The vast majority of responses in opposition to the idea that people should have anonymity for certain online activities noted either the idea that those who are doing no wrong should “have nothing to hide” or argued that anonymity enables a variety of illegal or objectionable activity. Among the specific concerns noted were: child predators, terrorists, human traffickers and cyberbullies. Others noted a range of concerns and the fact that if and when bad things happen, that the offenders should be able to be identified:

Could you please tell us briefly why you think that people should not have the ability to use the internet completely anonymously?

“There are a lot of crazy people that go on line and do bad things, these people should be able to be found, if they need to be anonymous then maybe they have something to hide.”

“Too much potential for crime. Using the internet anonymously removes responsibility.”

“I guess if there was some sort of illegal or threatening activity involved, I’d want that activity monitored, or the ability to trace it back to the originating person/place.”

Even as they expect anonymity for certain activities online, most assume that motivated people and organizations could uncover details that they wish to keep private. 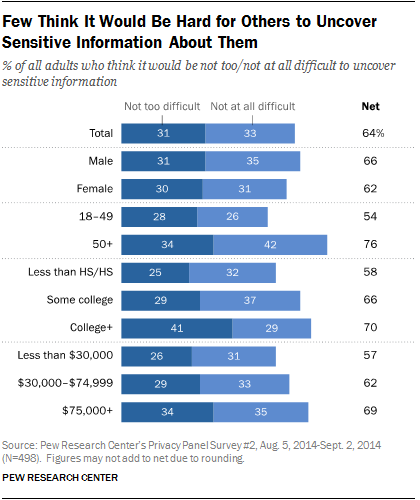 When respondents were asked to consider how difficult it would be for a motivated person or organization to learn details about their past that they would prefer to keep private, 64% said it would be “not too” or “not at all” difficult for them to uncover that sensitive information. Just 20% felt it would be “very” or “somewhat” difficult.

Men and women report similar responses, but those ages 50 and older (76%) are significantly more likely to believe it would be “not too” or “not at all difficult” when compared with those under the age of 50 (54%). Similarly, those with a college degree are more likely than those who have not attended college to feel more exposed (70% vs. 58%).