Two-thirds of Americans use the internet to connect with government

The figures released in this report are not comparable trend numbers to those previous surveys because the polls asked different questions about people’s online behaviors with government. However, the findings generally suggest more Americans are using the government’s online resources over time — no surprise given the growing numbers of online Americans over that time frame and the governments’ investment in online applications during that period.

Even though the questions asked in this survey also differ from past Pew Research Center surveys, the findings reveal that relatively high levels of Americans use the internet to transact with the government or gather information about government activities. In the past 12 months, about one-third of Americans used the internet or an app to access information or data provided by the three levels of government:

This comes to 49% of all adults who have done at least one of these three things with respect to using digital tools to find out about government or data it provides. Higher incomes households are more likely to have one of these three things. Two-thirds (66%) of those living in households with annual incomes over $75,000 have used the internet or apps for government information. (See the Appendix A for tables with detailed demographic breakouts for these and other survey results.)

Americans use the internet often in dealing with various layers of government, but in many instances traditional offline methods dominate. Across six different activities people might go online to engage with the government, 46% of American adults did at least one of them online in the prior 12 months. Some 55% of Americans did at least one of the six listed activities offline in the prior 12 months. 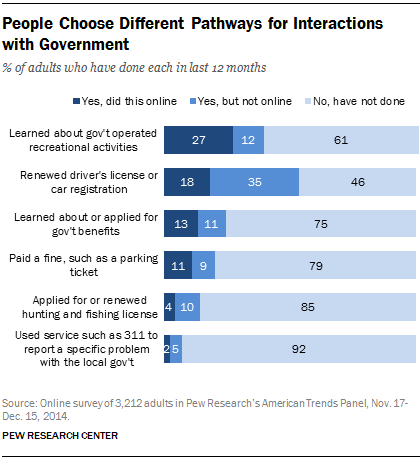 Collecting the incidence of Americans who either went online or used an app connected to any level of government or did at least one of the six activities listed above online yields a sense of how many Americans in the prior 12 months have used the internet to connect with government. This number comes to 65%. That is, two-thirds of adults have, in the previous 12 months, used the internet to find out something about government, or the data it provides, whether they are thinking generally about their state, local, or federal government, or when asked about specific online activities.

Although many Americans have used the internet or an app to search for government information or transact with the government, probing the ins-and-outs of government data is a different thing. What separates government online today compared with 10 years ago is that, in the past, governments typically provided online information: websites listing hours of operation or interfaces to databases that might have more detailed information. Today, many governments are trying to provide underlying data that it collects for public use — and touting it as a feature to the general public. The kinds of entrepreneurial activity new government data sources can spur range from home energy management to analytics for investment decisions.11

At the same time, many government data initiatives play out within government, with their impacts felt only through programmatic impacts. In Indiana, for example, the state Department of Child Services has fostered data sharing across different state bureaucracies to help case workers address child abuse problems more effectively. In Boston, improved data sharing within government helped the city’s 311 call system migrate to the Citizen’s Connect web-based system to address citizen complaints about garbage collection or traffic.12

In both entrepreneurial and service delivery examples, data are inputs that eventually connect to outcomes that consumers and citizens experience. However, as with many products, the inputs may be obscure to the average user. For these reasons, it is perhaps understandable that people are less attuned to them than more traditional online government applications. This shows up when exploring how effectively they think government shares the data it collects with the general public. 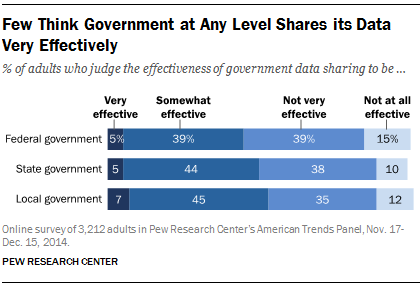 This comes to a minority of respondents — 31% altogether — who could think of a positive or negative example of local government providing to the public information about its data collection activities.

Those who could give an example of how government did a good job or did a bad job sharing data were offered the chance, in an open-ended fashion, to describe it. These comments — a non-scientific dive into people’s perspectives— provide additional context on how people see government data. Among those that offered positive examples, comments suggest that they value the availability of government data on demography, crime, the economy, and government budgets. Many comments touch on basic information, with some noting they appreciate the ease of finding out about park hours, leaf collection, or the time and place of public meetings. Transparency, in other words, is a key value for many commenters on government data-sharing practices.

Two additional things emerge from the comments of respondents who opted to share thoughts about how their local governments share data — both the good and the bad. First, these commenters seem to engage with government data as information-seekers, rather than as heavily engaged citizen-analysts. Second, many commenters express a desire to have more context and meaning be part of their interactions with government data. They value demographic or budget data, but would appreciate additional information (e.g., trends, understanding cost and benefits of projects) that might involve greater analysis of the data. This desire signals an opportunity for those interested in putting government data to better use for the public.

The story is mixed for using government sources to find out about different topics. For topics that have cross-cutting resonance for many people, sizable minorities of Americans have used a government source to search for information: 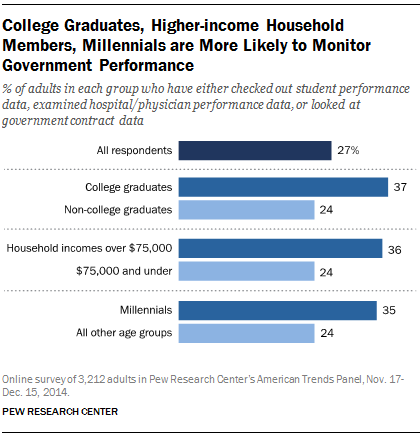 When it comes to more detailed searches that involve monitoring government performance, fewer users take advantage of government sources for these purposes:

Whether it is perceptions about government’s effectiveness in sharing data, recollections of local governments sharing data or use of government sources to monitor performance, only a minority have deep connections to data resources that really dig into government.

People often use government data, even if they do not recognize that — especially those who rely on weather and location apps

Nearly all smartphone owners (92%) have used at least one of these apps.

These apps are location-based services that build off of the Global Positioning System, while weather apps also rely on data from the U.S. government’s National Weather Service. For the most part, smartphone users are fine with letting their devices share their location with app providers. Some 56% share their location for at least some of their apps (38% do so for some of them, 18% for all of them).

Yet smartphone users have mixed views on the bargain that usually goes with downloading apps: share behavioral data with app providers in exchange for a free or cheap app. Specifically:

The findings point to a familiar dynamic in how people approach many online consumer applications. They like the convenience of internet-enabled applications, use them when they need them, but express caution at having their use of data understood or monitored by others. And most do not often delve into the details.

Through their usage patterns, people clearly indicate that mobile apps have value to them, notwithstanding some hesitancy in sharing personal data that help make them run, particularly when it means sharing data with government. People are supportive of the notion that government sharing data with the public creates value for the economy, if not that wholeheartedly. Some 50% of all Americans say the data the government shares with the public helps businesses create new products and services at least somewhat. But only 9% think this helps “a lot” and 41% say it helps “somewhat.” The remainder either think the impact is minor (34% say government data helps the economy either not much or not at all, and 16% had no opinion). Smartphone users are only slightly more likely to say this — 53% say government data sharing helps businesses create new products and services.

Another dimension of government data initiatives which the survey explored was people’s attitudes about applications involving government sharing data online. Some of those applications relate to information about individuals or their communities. People’s level of comfort with data sharing varied depending on the different uses of the data. 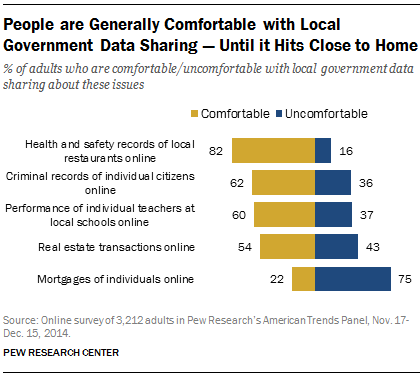 When looking across all five topics, some 82% of adults are uncomfortable with at least one of the items listed and 66% are uncomfortable with two. This suggests that, even in light of solid levels of comfort with government providing specific information about individuals and communities online, there is a degree of concern in the general population about this practice — especially when it comes to people’s homes.

As to demographics, an interesting pattern emerges when looking at people’s levels of comfort about sharing real estate information generally versus sharing information on individual mortgages. When it comes to income, relatively well-off and lower income respondents present contrasts. More than half (62%) of those in homes with annual incomes over $75,000 per year are comfortable sharing information about real estate transactions online, while less than half (44%) of those in homes where annual incomes fall beneath $30,000 say this. For online sharing of individual mortgage information, just 19% of those in higher income homes are comfortable with this while a larger share (26%) of lower income respondents say this. The same pattern is true for education. Some 65% of college graduates feel comfortable sharing information about real estate transactions versus 44% of those with high school educations or less; 19% of college grads are fine sharing individual mortgage information online compared with 24% of less educated respondents. 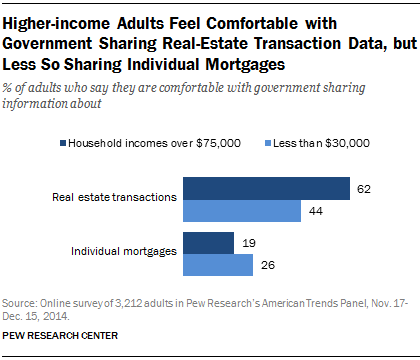 The differences could be attributable, in part at least, to lower homeownership rates for African Americans and Hispanics. Some 42.1% of African Americans own their home and 44.5% of Hispanics do; this compares with the 72.3% figure for whites and 64.0% for all Americans.13

Next: Users’ Views on Potential Impacts of Open Data and Open Government
← Prev Page
Page1Page2You are reading page3Page4Page5Page6Page7Page8
Next Page →