Internet users benefit from the efficiency of e-government, but multiple channels are still needed for citizens to reach agencies and solve problems

The drive by public agencies to provide information and services on the Internet opens up a way for Americans to contact government that was not available a decade ago. This report takes stock of how e-government is faring by placing e-gov in the context of the other ways people get in touch with government, such as telephone calls, in-person visits, and letters. It then assesses whether different means of contact – or other factors – are connected to the rates of success and satisfaction that users report when they reach out to government. This comparative look at how Americans get hold government reveals the benefits and limits of e-government at its current stage of evolution.

E-gov is not yet the “killer app” among the available tools to contact government.

The limits of e-gov have to do with people’s technological assets, preferences, and the wide range of problems people bring to government. Not everyone has Internet access – about one third of American adults do not – which means that phone calls, in-person visits, or letter-writing are the available options to contact government for a large share of the population. Many people simply do not choose to use the Web or email to get in touch with government. In fact, those who contact government, including Internet users, are most likely to say they prefer to use the telephone to do so. And not all problems lend themselves easily to e-gov solutions. “Real time” interaction with government – the telephone or in-person visits – is preferred when people have urgent or complex problems to sort out with the government.

In sum, e-gov is a helpful tool among several options for reaching out to government, but it is by no means the “killer app” among them. People’s problem-solving capacities matter to successful outcomes with government, not a specific technology. As policymakers expand the offerings of e-government, they would be wise also to maintain and upgrade the other channels that citizens use to contact government, with a focus on how these traditional channels may complement e-gov applications.

Data from our July 2003 survey of 2,925 Americans fill out the picture of how many Americans contact government, what for, by what means, and with what outcomes. The data also show how the Internet is used by citizens in their dealings with government. Much of the analysis focuses on a group we call Government Patrons – people who contacted government in the past year for reasons not related to the simple act of mailing in tax returns. The total number of Government Patrons is roughly 109 million adults (those 18 and older).

» A plurality of Americans who contact government do so via the telephone. Using a government Web site is the second most frequent approach for contacting government.

Here’s how the numbers break down for all Government Patrons. The percentages total to more than 100% because respondents were permitted to give multiple responses.

»  When Government Patrons were asked what way they would most prefer to contact government, the telephone was again the top choice.

»  More than half of all Americans contact the government in a given year.

People give a variety of reasons for contacting government, including conducting transactions, looking for answers to specific questions, seeking help with a specific problem, or expressing an opinion. Some 54% of all Americans – both Internet users and non-users – contact government in the typical year, where contacts are defined to exclude the simple act of mailing in tax returns. Those with specific queries about taxes were counted in the 54%. Here is why people contact government:

»  Internet users are more likely than non-users to contact government.

Outcomes: What matters in successfully addressing the problems and concerns people bring to government

»  People generally have success when contacting government, and they report high rates of satisfaction with their interactions with government.

»  Success in their interactions with government is influenced by people’s education and problem-solving skills, not just their technological assets.

»  Some types of government contacts lend themselves to success, but some do not.

»  Some problems lend themselves to “real time” interaction with the government. That means Government Patrons prefer using the telephone or visiting government offices as they deal with public agencies. Other problems are well suited for the Web or email.

The growing popularity and importance of e-gov among Internet users

»  Fully 77% of Internet users – or 97 million Americans – have at some time gone online to search for information from government agencies or to communicate with them.

As of the middle of 2003, use of the Internet to interact with government had grown 50% since the middle of 2002. In other words, roughly three fourths of Net users have done at least one of the following six e-gov activities, with the average user doing about three of them.

»  For Internet users with high-speed Internet connections at home, the Internet takes on greater prominence.1 Home broadband users who contacted government in the past year are slightly more likely to employ the Internet over the telephone or in-person visits to get in touch with government:

»  The Internet provides some efficiency payoffs for citizens in their interactions with government. Net users report that it takes less time for Net users to conduct their government business compared with non-Internet users.

»  Internet users report that the Net helps in their dealings with government.

»  The Internet is the principal tool in getting certain types of government information, but not for sensitive information or some transactions.

When all respondents were asked where they would turn if they needed information about government, the Internet outpaced the phone as the preferred channel for non-sensitive purposes. For instance:

For more sensitive queries, such as personal tax questions, people turn more often to the telephone than the Net by a 51% to 17% margin.

For several types of transactions, such as auto licenses, recreational licenses, or professional licenses, “some other way” (presumably in-person visits) lead the way, with both the phone and the Internet lagging significantly. 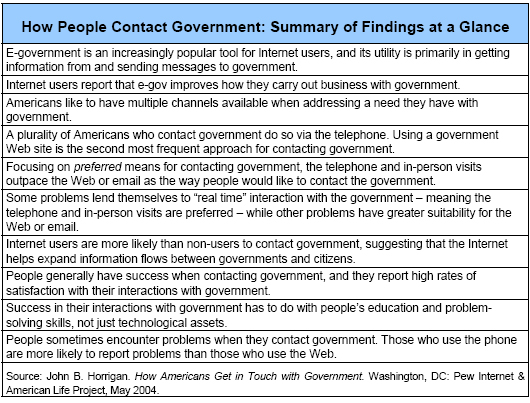 How Americans Get in Touch With Government
Internet users benefit from the efficiency of e-government, but multiple channels are still needed for citizens to reach agencies and solve problems
Acknowledgements Part 1. Introduction Part 2. How Americans Contact Government and Why Part 3. Problems People Encounter When They Contact Government Part 4. The Frequency and Nature of E-gov Part 5. Implications for Policymakers Methodology