The survey asked people detailed questions about the types of problems they run into when they contact government by phone, the Web, or email.

About 40% of Government Patrons who had some interaction with government in the past year used the telephone and it was a circuitous journey for many of them. Slightly more than half (52%) had to make more than one call before finding the appropriate person, while 46% said that they only had to make one call. When asked how they found what number to call, 27% said they dialed the operator or looked in the phone book, while 20% had the number because they had used it before. A similar number (19%) had gotten the number from a government publication or notice, and 15% said they looked the number up on the Internet. Only 3% used a government information number such as 1-800-FED-INFO.

People who used the phone to contact government were confronted by the usual litany of voice mailboxes and automated touch systems. Nearly two-thirds (64%) of this group encountered automated menus, with one-third of this group finding this not helpful at all. A bit more than a third (36%) got to someone’s voice mail where they could leave a message, and about a third found this not to be at all helpful. Finally, three-quarters (78%) reached a live person, and fully two-thirds who reached a person found this very helpful, and only 12% found it not helpful at all. 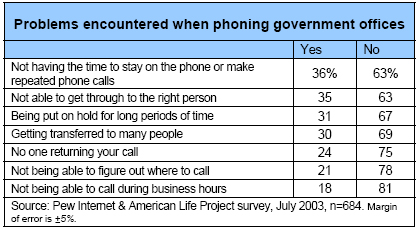 In looking at problems that arise when calling government offices, most users who contacted a government via the phone encountered some sort of problem. These problems generally have to do with spending a lot of time on the phone. Somewhat more than one-third of telephone callers did not have time to stay on the phone or make repeated calls, and a similar share said this about difficulties in finding the right person, spending too much time on hold, or being transferred too often. All in all, three in five (59%) of people who used the phone to contact the government ran into at least one of the problems listed in the table. The average number of problems encountered (out of the seven listed) was 3.3.

For the 29% of Government Patrons who used a Web site in their last contact with government, three out of eight (37%) respondents who used the Web to contact government found the site via a search engine and 19% said they heard of the site from a family, friend, or advertisement. Another 17% said they went to the site because they had used it before. One in seven (14%) said they came upon the site because of a government publication. Only 8% said a general government information site, such as FirstGov or AOL’s government guide, directed them to the site.

Once at the Web site they needed to use, the experience went fairly smoothly for users. As the table shows, many people who used the Web to contact government did not have problems. One third of those who went to a government Web site said the site didn’t have the information they needed. One in five (20%) say they found the site difficult to navigate and 16% said they had a hard time figuring out what site to go to. Bad links and problems downloading forms or instructions were problems for only about 1 in 7. Overall, 46% of these users ran across at least one of the five types of problems queried, with these users on average encountering two of the five problems.

Comparing email contact to telephone contact, the 19% of people whose last contact with government was using email seemed to have a somewhat more straightforward experience than the phone callers. For those who used email to get in touch with government, 58% said they sent only one email, while 41% said they sent multiple emails (compared with 52% in the group of phone callers who made more than one call). Of those who used email to contact government, two-thirds said they wanted or expected a response, and 79% of them said they received a response. And 80% of all users who emailed government in their last contact were confident that the email went to the appropriate person or office.

Further analysis of those who experience problems when they contact the government using the Web or the telephone indicates that disabilities and, to a lesser extent, possible language barriers are behind some of the problems people have in interactions with government, along with general attitudes about government. These factors come into play more clearly when analyzing problems encountered when the telephone is the means of contact than when the means of contact is the Web.

Among respondents who classify themselves as having a disability, 67% encountered some sort of problem the last time they contacted the government by telephone, above 59% average.

There are some small differences in the profiles of those who experienced problems during their telephonic contact with government compared with those who did not. Those who did not experience problems are somewhat more likely to have high-speed connections at home and are slightly better educated. The significant differences emerge with people who have disabilities and when focusing on the general attitudes about government. Among respondents who classify themselves as having a disability, 67% encountered some sort of problem the last time they contacted the government by telephone (compared with the average of 59%).

For those who live in a household in which a language other than English is spoken, 65% had a problem when they contacted the government by phone, six percentage points above the average. Just because a language other than English is spoken in the home does not mean that all respondents from such households have problems with the English language. However, households in which another language is spoken is an indicator that, for some of these homes, language barriers may come into play in interactions with government. In addition, it is important to note that our survey was conducted. It was conducted in English, meaning respondents obviously had facility in the English language.

People with disabilities were no more likely to report problems than others in their Web contacts with government, but they are about half as likely as the general population to use the Web to contact government.

Focusing on respondents whose last contact was via the Web shows similar, though less pronounced patterns. Fully 62% of people who report that a language other than English is spoken in the house said they had trouble in using the Web to contact government compared with the average of 46%. Although people with disabilities were no more likely to report problems than others in their Web contacts with government, these people are about half as likely as the general population to use the Web to contact government. Attitudinal factors also figure into the frequency with which people encounter problems in using the Web to deal with government. Of the people who say they trust government, 39% ran into at least one problem when they used the Web to contact the government.

Next: Part 4. The Frequency and Nature of E-gov
← Prev Page
Page1Page2Page3Page4You are reading page5Page6Page7Page8
Next Page →

How Americans Get in Touch With Government Acknowledgements Part 1. Introduction Part 2. How Americans Contact Government and Why
Part 3. Problems People Encounter When They Contact Government
The survey asked people detailed questions about the types of problems they run into when they contact government by phone, the Web, or email.
Part 4. The Frequency and Nature of E-gov Part 5. Implications for Policymakers Methodology