More Internet users are going to e-gov sites than ever.

To explore in more detail what Internet users do when they go online for e-government, this survey asked, as the Pew Internet Project has done in the past, whether Internet users had ever looked for information online from a local, state, or federal government Web site. Additionally, Internet users were asked whether they had done any of the following things:

Asking people about specific online government queries jogs people’s memories. People who respond “no” to the general question about whether they have contacted any level of government online may say “yes” when prompted about a specific activity, such as emailing a government agency. The result will be a greater overall number of respondents saying that they have contacted government via electronic means than is the case when they are only asked the general question. This approach produces a richer picture of what people do when they contact government using the Internet.

The July 2003 survey that is the basis for this report shows the steady upward trend in use of e-government among Internet users. Our trend question – “Have you ever gone online to look for information from a local, state, or federal government Web site?” – showed that 66% of Internet users had done this by July 2003. That is a ten-percentage point increase since the question was last asked in late 2002. With a growth in Internet penetration nationally since 2002, this means that 17 million more Americans had gone to e-gov sites by mid-2003 when e-government usage is measured by responses to that question. As noted, we probed further into the types of e-government activities. The table below shows that sizable minorities of Internet users have done thing as varied as researching official documents to checking out tourist information. 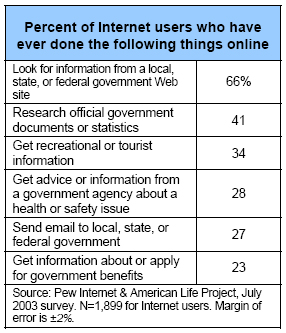 With the expanded menu of e-government activities to consider, fully 77% of American Internet users – or 97 million people – have done at least one of the six online government items queried. This is 50% more than in 2002. Of the six items asked about, Internet users had on average engaged in 2.8 of them. Demographically, those who contact government using the Internet are more likely to be male, have been online longer, and are more likely to have broadband connections at home. They are also better educated and wealthier than those who have not sought out government information online.

Dispositions on how to contact government by issue area

All respondents were asked a series of questions about where they would turn first if they needed to contact government – the telephone, the Internet, or some other means. As the following three tables show, people’s preferred means of government contact vary according to the type of query that is posed in these hypothetical scenarios.

For personal transactions, some other way – presumably an in-person visit or ground mail – is the choice for executing a transaction such as renewing an auto license.

The Internet takes on a more prominent role for information searches, as respondents say they would most likely turn to the Internet to do research for school or work or to find out what kind of programs agencies offer.

When it comes to matters that may involve the disclosure of personal information, people feel comfortable with the phone or another means, with the Internet not widely being preferred by respondents. This is especially true for personal tax issues, where only one in six respondents said they would turn to the Internet.

Breaking respondents into three categories – non-Internet users, dial-up users, and people with high-speed connections at home – yields a somewhat different picture. For broadband users at home (who in this survey made up 32% of people who go online from home), the Internet was far and away the tool to which people say they would turn to contact government for informational searches. This is most pronounced for research, finding out about government programs, and seeking tourist or recreational information.

For personal transactions, high-speed home users appear poised to engage in a substitution away from the telephone to online means in order to get recreational or other types of licenses. Still, broadband surfers say they will employ other approaches to address these problems; indeed for a license for a personal project they are as likely to use the Internet as some other means such as a personal visit to an agency.

For government contacts that may require the disclosure of personal information, the story is mixed. At roughly the same rate, non-Internet users and Internet users prefer the phone for inquiring about a personal tax issue, though high-speed home Net users show a preference for online means as well. For expressing an opinion, Net users, dial-up and high-speed alike, seem comfortable with logging on to pass on an opinion, while non-users either pick up the phone, write a letter, or pay a visit to be heard.

It may seem anomalous that a number of non-Internet users say they would turn to the Internet next time they need to contact government. Indeed one-quarter of non-Internet users say they would turn to the Net to research something connected to government, and nearly a fifth say that with respect to exploring government benefits. Two findings from past Pew Internet Project research help explain this oddity. First, about 20% of people who classify themselves as non-Internet users live in households in which someone else goes online. Second, a sizable number of non-users – about 30% – say that they were Internet users at one point.7 In the case of the former finding, non-users may plan to ask someone else in the house to do an online search for them. In the case of the latter, perhaps some of these non-users are saying that they would re-enter the online world, if only briefly, if they needed some government information.

Perceptions of how the Internet helps

In addition to the hypothetical question about where respondents would turn to for their next government query, Internet users were asked broad questions about how much, if at all, the Internet has helped the way they interact with different levels of government.

For people with high-speed connections at home, the “always on” broadband connection appears to magnify the perceived benefits to using the Internet to interact with government. Roughly 60% of home broadband users say the Net helps them in their interactions with governments at the state and federal level, and just one in five say it has had no impact.8

All this is in the realm of respondents’ perceptions, but people’s perception of a benefit is far from an insignificant finding. Armed with additional information that they get from the Web, Internet users may feel better about their interactions with government because they are more informed going in. The fact that the Internet also saves time in interactions with government is also likely to contribute to these positive perceptions. The larger effect for broadband-at-home Internet users is no surprise, given their easier access to information.

Expressing an opinion using the Internet

The Internet has an additive effect on the overall frequency of contacting government, and, as noted, some of this additional contact is probably attributable to people weighing in with opinions. Internet users were explicitly asked whether they had ever used the Internet or email to try to change a government policy or affect a politician’s vote. About one-third (30%) said they had done this in the July 2003 survey, a substantial increase from the 19% who said this in a September 2001 callback survey of people who had at one time gone to a government Web site. The policy issues that prompted the contact run a fairly wide gamut; 15% identified the environment as the reason for their missive, 11% said education, 11% said budget or tax issues, 10% said the Iraq war, 10% said health care, and 10% said civil rights or social justice. One quarter (26%) identified some other issue.

For people with high-speed connections at home – which makes up 32% of those in this survey who go online from home – the convenience and speed of the “always on” connection seems to encourage them to share their views with government officials. Fully 36% of people with home broadband connections have contacted government officials about policy issues versus 28% of dial-up users. There are some differences in the types of issues about which broadband users share their views. About one-fifth (19%) identified the environment as the issue they sought to influence using the Internet compared with 12% for dial-up users. And 13% of broadband users said education was the issue they contacted government about versus 9% for dial-up users.

Next: Part 5. Implications for Policymakers
← Prev Page
Page1Page2Page3Page4Page5You are reading page6Page7Page8
Next Page →

Emerging Technology ImpactsInformation SeekingFederal Government
Defining generations: Where Millennials end and Generation Z begins
25% in U.S. see at least some truth in conspiracy theory that COVID-19 was planned
Are you in the American middle class? Find out with our income calculator
Americans Who Mainly Get Their News on Social Media Are Less Engaged, Less Knowledgeable
Americans Fault China for Its Role in the Spread of COVID-19