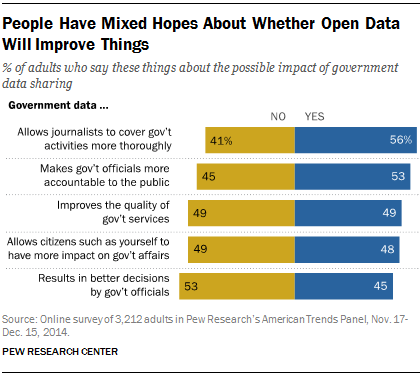 Focusing on accountability, 56% say government data initiatives can help journalists cover government better and 53% say these initiatives could make government officials more accountable. This comes to two-thirds (66%) of adults saying open data would accomplish at least one of the two goals, with 34% not accepting these notions.

For measures about government performance, half of adult Americans say government open data efforts could improve the quality of government services and 45% say open data could results in better decisions by government officials. Just under half (48%) think government data means they are likely to have more of an impact on government affairs. 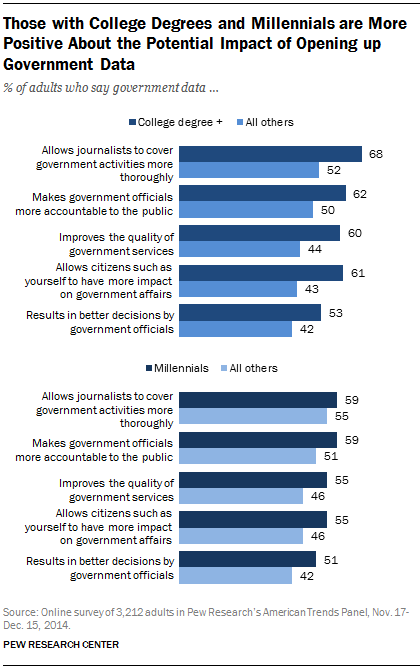 Beneath these results showing optimism about government data’s impacts are people’s baseline attitudes about government. And indeed how people view the possible benefits of data initiatives varies with how they view two things: 1) Their trust in government and 2) Whether they believe they can have an impact on their community. 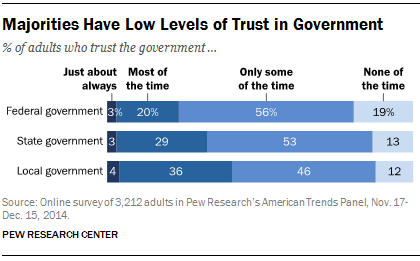 The differences in attitudes of possible impacts are more striking when comparing responses of those who trust the federal government most of the time to those who do not. The following table shows the wide gaps — at least 20 percentage points and in one case more than 30.

Trust, political leanings, and behavior: Democrats are more likely to trust government and be optimistic about data’s impacts, but party identification has little impact on using the online government data applications 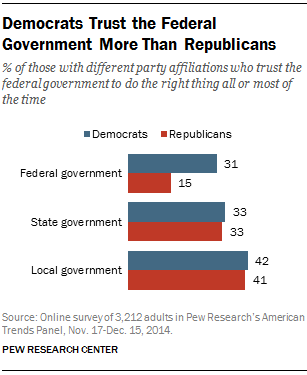 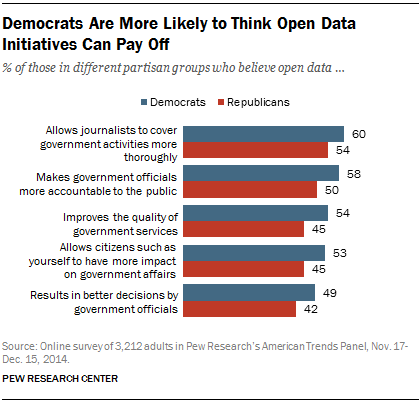 Turning to attitudes about the impact of government data, Democrats are generally more likely to see potential benefits in government data initiatives than Republicans. The gaps are in the 6 to 9 point range across all questions, which is narrower than the margins between Democrats and Republicans for trust in the federal government.

It is also worth looking at differences between Republicans and Democrats on behavior — that is, their use of online tools for interacting with government. The table below compares the collected incidence of several kinds of activities: use of the internet or an app to find out about any of the three levels of government, whether people had done any of six things online (such as renewing a drivers’ license or paying a toll), or whether they had monitored certain aspects of government performance online (e.g., teacher performance, hospital or health care provider performance, or looking at crime reports). 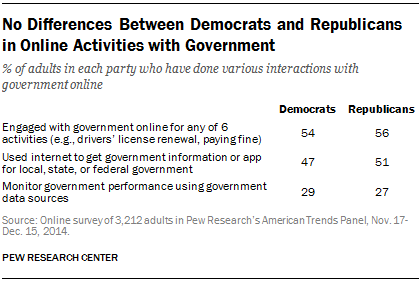 As the table to the right shows, there are small — and not statistically significant — differences between Democrats and Republicans when the focus is on behavior. Being a Republican or a Democrat has nothing to do with whether a person uses online tools and government data sources to find out about something or carry out a transaction with government.

Similar, though less pronounced, patterns are evident when people were asked whether they felt they could have an impact on making their community a better place to live. Among all American adults:

Here’s how those who say they could have a big impact responded to questions about government data initiatives compared with everyone else. 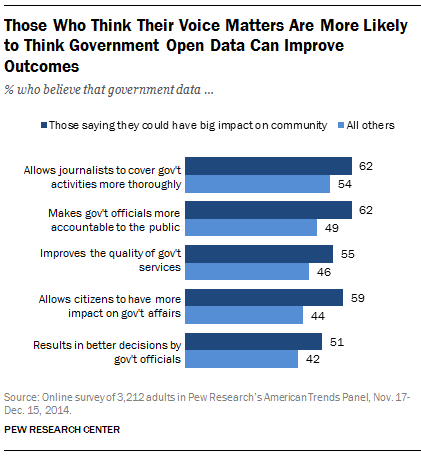