These tensions suggest the possibility there are different groups of users with different perspectives on open data/open government initiatives. Some people may be ardent users of open government applications and very optimistic about how such applications can improve government. Others may use the applications, but not think they will make much difference to government operations. Still others may be discouraged about the whole thing — light users and unimpressed with potentially positive impacts. Understanding these patterns, and the relative sizes of the groupings, might be illuminating to stakeholders interested in the public’s posture toward open data and open government initiatives.

The following analysis is based on a statistical technique called cluster analysis. It is employed to place respondents in categories based on how they respond to certain questions. In the analysis to follow, respondents’ answers to questions on behaviors (e.g., use of online government applications) and attitudes (e.g., views on open data initiatives’ impacts) form the basis of the groups. The questions included for analysis were:

It is worth noting what variables are not in this typology. Respondents’ answers about their trust in government and ability to impact their community were not included, nor were insights about respondents’ technology use (e.g., whether they use the internet or applications such as Facebook). That is because the typology’s focus is on responses to questions about open data and open government, not technology use or other attitudinal measures. 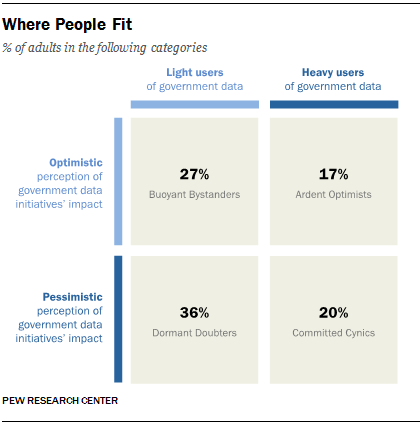 The typology yields a four-way grouping of users of open data/open government applications that runs across two dimensions: use of applications (light to heavy) and perceptions of government data initiatives’ possible impacts (pessimistic to optimistic).

Ardent Optimists: Some 17% of all adults are heavy users of open government/open data applications, fairly likely to use them to monitor government performance, and highly likely to think that open data and open government initiatives can improve outcomes. Half (50%) of those in this group have gone online to learn about government operated recreational activities (nearly twice the 27% average) and 22% have gone online to learn about government benefits (against the 13% average). They also are more attuned to what governments are doing when it comes to data. Some 13% in this group thinks the federal government shares data very effectively, the same number says this about state government, and 17% say this about local government. This is more than twice the average in each case. Nearly 4 in 10 (38%) can think of an example where local government has done a good job providing data (twice the average) and 28% can think of an example where local government did not provide enough useful information — 9 points above the average.

The characteristics of Ardent Optimists significantly shape the attitudes they bring to thinking about government. Some 38% trust the federal government at least most of the time, half (48%) say this about state government, and 61% trust local government at least most of the time. This exceeds the average by between 15 and 21 percentage points across the three categories. Almost half (47%) say they can have a big impact on their community compared with the 32% figure for all respondents.

Demographically, Ardent Optimists are well off financially (22% live in households where the annual income exceeds $100,000 compared with the 15% average) and well-educated (43% have college degrees against the 28% average). They are also more likely to be men; 57% are. (See Appendix B for tables with details on demographics and responses to specific questions for this and all groups). Politically, a clear majority of Ardent Optimists are Democrats: 57% identify as Democrats (or leaning that way), while 36% are Republicans.

Committed Cynics: This group — 20% of adults — is marked by engagement with government’s online applications and relatively strong awareness of data initiatives, but not a lot of hope that government data will improve how government functions. Similar to Ardent Optimists, Committed Cynics do take advantage of government’s online offerings; 38% have used the internet to find out about government-operated recreation activities such as parks and one-quarter (24%) have renewed a driver’s license or car registration online. Most have used a government app or gone online for government information or data; 91% have done this relating to state government, 80% for the federal government, and 71% for state government. These figures are more than twice the average and are comparable to incidence in this area for Ardent Optimists. The Committed Cynics do pay some attention to what local governments are doing with data — 25% can think of an instance in which local government did a good job sharing data with the public and 30% can think of a time when local government did not provide useful data.

Buoyant Bystanders: About one-quarter (27%) of adults fit into a category of users who do not heavily use online government applications or exhibit a great deal of awareness of data initiatives. But they have high hopes that government data initiatives can help improve how government performs. Just 16% have gone online or used a federal government app to find out about government data or information, 2% have done this for state government, and 8% for local government. These figures are far below the figures for the entire survey. Some 27% have gone online to look for crime reports in their area compared with the 36% average and 29% have sought out information online about transportation against the 38% average.

Buoyant Bystanders bring solid levels of trust (relative to other groups) to their perspectives on government and data, as 35% trust the federal government at least most of the time against the 23% average and 43% say this about their state government (compared with 32% for all respondents).

Demographically, this group has lower levels of education and income than the prior three groups; it is also the most diverse from the perspective of gender, race, and ethnicity. Buoyant Bystanders are predominantly female (56%) and 27% are either African American or Hispanic (14% for each). One-fifth (22%) live in homes where the annual income exceeds $75,000, below the 27% figure for all and just more than half the figure for Ardent Optimists and Committed Cynics. Politically, Buoyant Bystanders resemble Ardent Optimists. Half (51%) are Democrats (or lean that way) and 38% are Republicans (or lean that way); 11% are independent.

The final — and largest — group is the Dormant Doubters; they neither use the internet for government-related applications nor do they believe such applications will improve government performance. They make up 36% of the general population and few have used apps or gone online for government information; just 8% have done this for the federal government, 1% for their state government, and 7% for local government. Only 8% can think of an example where government did a good job providing data — less than half the average.

Demographically, this group is older (22% are age 65 or older) with much lower income than the other groups (44% have annual incomes under $30,000), and with fewer (17%) college graduates than the other groups. As to their political views, Dormant Doubters mainly track the general population. Some 46% are Democrats (or lean that way) and 42% are Republicans.

Technology use across groups 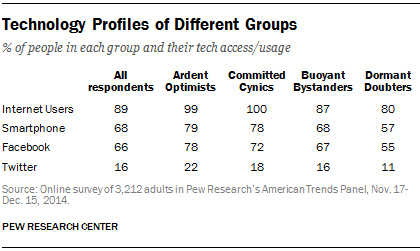 With the main thrusts of the survey about awareness and use of government data, it is natural to wonder how respondents’ technology use plays out across the four categories of users. Overall, most respondents use modern information technology. Some 89% of respondents use the internet, 68% have smartphones and 66% use Facebook. Comparing the different groups, the first two groups, Ardent Optimists and Committed Cynics, are the heaviest tech users, with all identifying as internet users and nearly 80% with smartphones. The final two groups, Buoyant Bystanders and Dormant Doubters, are somewhat less connected to technology, with 87% and 80%, respectively, saying they are internet users and 68% and 57%, respectively, having smartphones. Even with the differences across the groups, each group has large majorities with the tools of modern communications. As noted above, the technologies people have adopted were not inputs for the typology’s groups.

Next: Appendix A: Demographic Detail on Responses to Selected Questions
← Prev Page
Page1Page2Page3Page4You are reading page5Page6Page7Page8
Next Page →