Government reformers and advocates believe that two contemporary phenomena hold the potential to change how people engage with governments at all levels. The first is data. There is more of it than ever before and there are more effective tools for sharing it. This creates new service-delivery possibilities for government through use of data that government agencies themselves collect and generate. The second is public desire to make government more responsive, transparent and effective in serving citizens — an impulse driven by tight budgets and declining citizens’ trust in government.

The upshot has been the appearance of a variety of “open data” and “open government” initiatives throughout the United States that try to use data as a lever to improve government performance and encourage warmer citizens’ attitudes toward government.

This report is based on the first national survey that seeks to benchmark public sentiment about the government initiatives that use data to cultivate the public square. The survey, conducted by Pew Research Center in association with the John S. and James L. Knight Foundation, captures public views at the emergent moment when new technology tools and techniques are being used to disseminate and capitalize on government data and specifically looks at:

Among the survey’s main findings:

As open data and open government initiatives get underway, most Americans are still largely engaged in “e-Gov 1.0” online activities, with far fewer attuned to “Data-Gov 2.0” initiatives that involve agencies sharing data online for public use.

65% of Americans in the prior 12 months have used the internet to find data or information pertaining to government.

In this early phase of the drive for open government and open data, people’s activities tend to be simple. Their connection to open data could be as routine as finding out the hours of a local park; or it could be transactional, such as paying a fine or renewing a license. 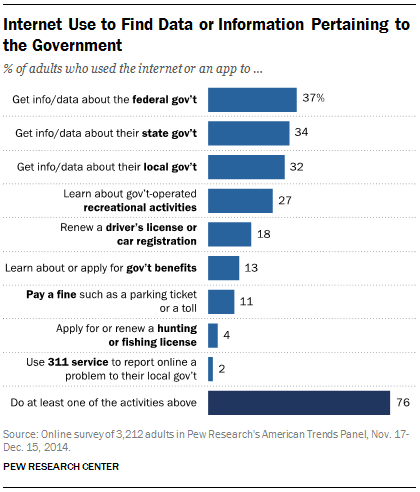 Minorities of Americans say they pay a lot of attention to how governments share data with the public and relatively few say they are aware of examples where government has done a good (or bad) job sharing data. Less than one quarter use government data to monitor how government performs in several different domains.

Few Americans think governments are very effective in sharing data they collect with the public:

Somewhat larger numbers could think of examples in which their local government either did or did not do a good job providing information to the public: 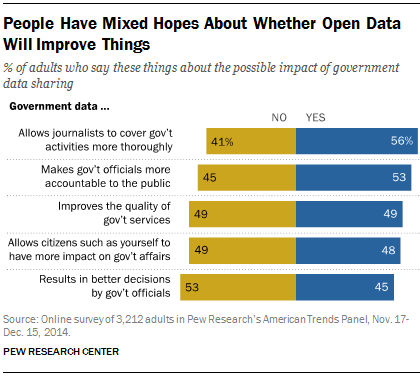 When looking at government performance, however, people are less optimistic, with less than half of Americans saying open data can help the quality of government services or officials’ decisions.

Additionally, 50% say they think the data the government provides to the public helps businesses create new products and services.

People’s baseline level of trust in government strongly shapes how they view the possible impact of open data and open government initiatives on how government functions. 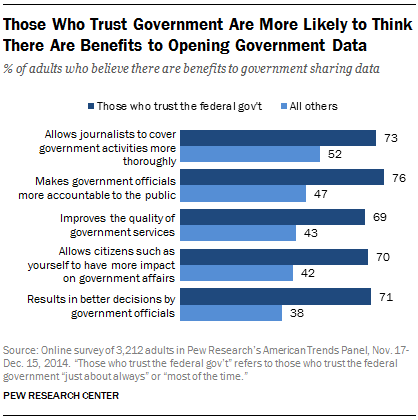 In this survey, 23% of Americans say they trust the federal government to do the right thing at least most of the time.1 This trusting minority of Americans is much more likely than others to see the potential benefits of government data initiatives:

Americans’ perspectives on trusting government are shaped strongly by partisan affiliation, which in turn makes a difference in attitudes about the impacts of government data initiatives. 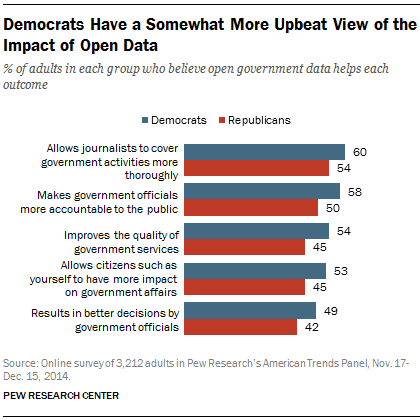 Some 48% of this sample say they are Democrats or lean that way, while 41% identified as Republicans (or as leaning toward the Republican Party). Those with different partisan views have different notions about whether they trust government. Some 31% of those identifying as Democrats (or leaning that way) say they trust the federal government to do the right thing most of the time, compared with 15% of those identifying as Republicans (or leaning that way).

Americans are for the most part comfortable with government sharing online data about their communities, although they sound cautionary notes when the data hits close to home.

People’s comfort with government sharing varies across a range of topics:

Smartphone users have embraced information-gathering using mobile apps that rely on government data to function, but not many see a strong link between the underlying government data and economic value.

One of the issues for proponents of open government and open data is whether people are aware that government data undergird key businesses. Perhaps the most prominent example is that government weather-related data are the foundation of large numbers of weather-forecasting companies and analysts. In addition, government-created geolocation data are often the centerpiece of Global Positioning Systems (GPS) that are widely used in smartphones and other location-tracking systems.

The Pew Research survey asked the 68% of the sample who have smartphones several questions about their use of government-created data material:

Despite widespread use of commercial applications that rely on government data, just 9% (among all Americans) say that the data government shares with the public helps a lot with the private sector’s creation of new products and services, while another 41% says it helps somewhat.

People’s outlooks about open data and open government sort into four distinct groups that depend on their engagement with government data and online applications, as well as their level of optimism about how government data initiatives might impact government.

Another 20% are steady users of online government resources, but are skeptical that they will have any payoff to government performance. These Committed Cynics use the internet to find the government information they need and have relatively high levels of awareness of when governments do a good job sharing information about data. But a minority thinks government data will improve government services, decisions or their ability to impact the government. This group has low levels of trust in government.

Some 27% like the idea that data can improve how government performs, but these Buoyant Bystanders are not likely to use the tools that the data enables to connect with government. Strong majorities think government data initiatives can foster greater government accountability and better government services. This group brings more trust in government to the table than other groups, but they do not often use the internet to get information about government or carry out transactions.

The analysis in this report is based on findings from a nationally representative survey of 3,212 American adults (ages 18+) by the Pew Research Center on its American Trends Panel. It was fielded November 17-December 15, 2014. The survey was conducted in English and Spanish on the web and in postal mail. The margin of error for the full sample is plus or minus 2.0 percentage points.

Public Trust in Government: 1958-2014
Government Online
Lessons and Highlights from the Gov 2.0 Expo
How Americans Get in Touch With Government
The Future of Corporate Responsibility