For generations, commentators have worried about the impact of technology on people’s stress. Trains and industrial machinery were seen as noisy disruptors of pastoral village life that put people on edge. Telephones interrupted quiet times in homes. Watches and clocks added to the de-humanizing time pressures on factory workers to be productive. Radio and television were organized around the advertising that enabled modern consumer culture and heightened people’s status anxieties.

Inevitably, the critics have shifted their focus onto digital technology. There has been considerable commentary about whether internet use in general and social media use in particular are related to higher levels of stress.1 Such analysts often suggest that it is the heaviest users of these technologies that are most at risk. Critics fear that these technologies take over people’s lives, creating time pressures that put people at risk for the negative physical and psychological health effects that can result from stress.

This research explores whether the use of social media, mobile phones and the internet is associated with higher levels of stress. In a Pew Research Center survey of 1,801 adults,2 we asked participants about the extent to which they felt their lives were stressful, using an established scale of stress called the Perceived Stress Scale (PSS).3 This scale is based on people’s answers to 10 questions that assess whether they feel that their life is overloaded, unpredictable and uncontrollable. Perceived stress, as measured through the PSS, can be viewed as an assessment of the risk that people face for psychological disorders related to stress, such as anxiety and depression, as well as physical illnesses, such as cardiovascular disease and susceptibility to infectious diseases.

There are a number of well-known factors that tend to make people feel more stress, including things like the economic uncertainty of unemployment, and the absence of a spouse or a partner with whom to confide. Previous studies have even found that awareness of stressful events in others’ lives is a major contributor to people’s appraisal of their own stress levels. The relationship of frequent use of digital technologies to stress has been an unknown. We also explored the possibility that the social component of some digital technologies makes people more aware of stressful events in the lives of their close friends and family, as well as in the lives of more socially distant acquaintances, and that this in turn is related to higher levels of stress.

The answer: The relationship between stress and social media use is indirect. It is the social uses of digital technologies, and the way they increase awareness of distressing events in others’ lives, that explains how the use of social media can result in users feeling more stress.

Imagine a typical Facebook user. He or she is also likely to use other digital technologies, such as email and text messaging. All these technologies allow him or her to share information with friends and family in the form of photos, short textual messages and other contacts. As a result of this communication, he or she is aware and reminded of more activities in the lives of friends and family.

On the one hand, there are benefits from this contact. According to previous research by the Pew Research Center, compared with non-social media users and those who are not as active on Facebook, this person likely: has more close friends; has more trust in people; feels more supported; and is more politically involved. While some might assume that this typical user of Facebook and other digital technologies experiences peer pressure to participate or keep up, and a fear of missing out, if such pressures exist, our typical user does not feel more stress than what he or she would otherwise have experienced, or the social benefit of using these technologies cancels out those additional costs. He or she is unlikely to feel more stress than those who are not using or are less active on social media.

On the other hand, there is the common exception to this relatively positive situation. Sometimes, a social media user’s awareness of events in others’ lives includes knowledge about undesirable events, a friend or family member getting fired or losing someone close to them. Learning of such events in the life of a friend or family member can result in higher feelings of stress.

Gender differences are a major part of this story. Women and men have different levels of stress; their use of digital technologies varies; and the impact of their technology use is different.

The broad patterns are:

Elaborating on the Major Findings

Overall, women tend to report more stress than men. But, women who use a number of digital technologies to communicate with others report less stress than women who are non-users.

Because men and women tend to experience stress differently, we ran each of our analyses separately for men and for women. We did statistical modeling allowing us to more fully understand the relationship between stress and the use of different technologies. The use of regression analysis allowed us to control for such things as age, unemployment, education levels and marital status — all of which are related to how much stress people tend to report in their lives independent of whether they use technologies or not.5

We do not know what it is about these specific technology uses that are associated with lower stress. However, existing studies have found that social sharing of both positive and negative events can be associated with emotional well-being and that women tend to share their emotional experiences with a wider range of people than do men.6 Sharing through email, sending text messages of pictures of events shortly after they happen and expressing oneself through the small snippets of activity allowed by Twitter may provide women with a low-demand and easily accessible coping mechanism that is not experienced or taken advantage of by men. It is also possible that the use of these media replaces activities or allows women to reorganize activities that would otherwise be more stressful.

Women are more aware of stressful events in the lives of their closest friends and family.

In the survey we asked people if they were aware of whether any of a list of 12 stressful events had happened to someone close to them, an acquaintance, or both in the past year. The events were selected from a list of major life events that are known social stressors.7 Our list ranged from relatively common to less common events: hospitalization, death in the family, divorce or marriage, being fired/laid off, being accused of a crime, starting a job, demotion/pay cut, being a victim of a crime, having a child move away or return home, pregnancy or child birth, and moving to a new house.

Social media users tend to be more aware of stressful events in the lives of people they know. 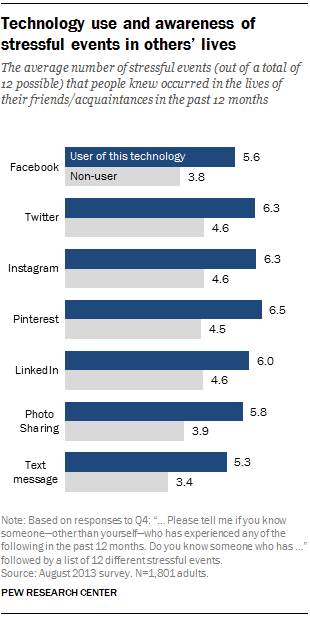 Different technologies are associated with varying levels of awareness of stressful events that have occurred to others — and there is also variation depending on whether the events have occurred to those who are close ties, compared with more-distant acquaintances.

Facebook was the one technology that for both men and women provides higher levels of awareness of stressful events taking place in the lives of both close and more distant acquaintances. Other technologies are more specialized: some provide awareness of major events in the lives of close relationships, while others provide an awareness of activities in the lives of acquaintances who are less socially close. It is not a new finding that people tend to use different technologies to communicate with social ties of different strengths. For example, other studies have found that cellphones and instant messaging are more likely to be used with family and close friends.8 To add to this complexity, we found that men and women used digital technologies differently, and this is important for understanding how people are exposed to information about stressful events in others’ lives.

For women, awareness about stressful events in others’ lives was also likely to be related to sharing pictures online, use of Pinterest and Twitter. For men, awareness was particularly likely to be related to email, LinkedIn and text messaging on their cellphone. These patterns are a result of both the tendency for men and women to use different technologies, and for them to use different technologies to keep in touch with different types of people — friends, family, workmates and acquaintances.

Awareness of stressful events in others’ lives is a significant contributor to people’s own stress. The number of undesirable events associated with stress is greater for women than for men.

The cost of caring is particularly felt by women. This is a result of two facts about women and stress: first, women report higher levels of stress to begin with, and second, women are aware of more stressful events in the lives of their friends and family.

Holding other factors constant, women who were aware that …

For men, of the events we explored, only two predicted stress. Holding other factors constant, men who were aware that …

While the little sips of information sent through social media may not seem like much, they can add up to a big gulp. This study suggests that the information transferred through social media translates into awareness of all kinds of extra things, including an awareness of undesirable events in the lives of family, friends and acquaintances. Whether as a result of social media, or more traditional forms of interaction, awareness of undesirable events in others’ lives generates a cost in terms of increasing psychological stress, and with it, higher risk for the physical and psychological problems that often accompany stress.

The analysis in this report is based on findings from a nationally representative survey of 1,801 American adults (ages 18+) by the Pew Research Center fielded August 7-September 16, 2013. The survey was conducted in English and Spanish on landline and cellphones (N=900). The margin of error for the full sample is plus or minus 2.6 percentage points. Some 1,076 respondents are users of social networking sites and the margin of error for that subgroup is plus or minus 3.3 percentage points.

Next: Psychological Stress and Social Media Use
← Prev Page
You are reading page1Page2Page3Page4Page5
Next Page →