For one-third of U.S. adults, the internet is a diagnostic tool

As of September 2012, 81% of U.S. adults use the internet and, of those, 72% say they have looked online for health information in the past year.

Since online personal diagnosis is a scenario that has intrigued observers for years – and caused some anxiety about people’s ability to navigate the online information landscape – the Pew Research Center’s Internet & American Life Project explored it in some depth in its most recent health survey. Of those who have looked online for health information, 59% say they have ever gone online specifically to try to figure out what medical condition they or someone else might have. That translates to 35% of U.S. adults.

Women are more likely than men to go online to figure out a possible diagnosis. Other groups that have a high likelihood of doing so include younger people, white adults, those in the highest income bracket, and those with more education (see table below for details).

The following analysis is based on questions asked only of that 35% of the population who answered that they have gone online to figure out what they or someone else might have. We will refer to them as “online diagnosers.”

First, online diagnosers were asked if the information they found online led them to think that this was a condition that needed the attention of a doctor or other medical professional, or that it was perhaps something they could take care of at home:

Fifty-three percent of online diagnosers say they talked with a medical professional about what they found online, 46% did not (see table below for details).

Separately, we asked if a medical professional confirmed what they thought the condition was and found that: 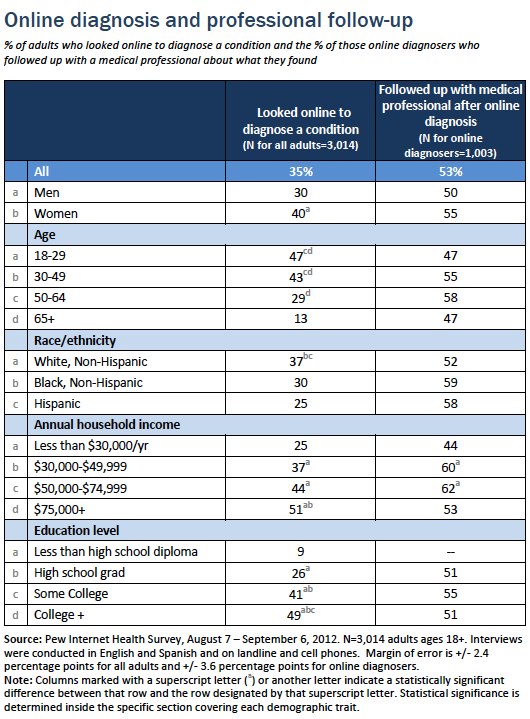 There is no statistically significant difference between those who have health insurance and those who do not when it comes to using the internet to figure out an illness.

It is important to note what these findings mean – and what they don’t mean. Historically, people have always tried to answer their health questions at home and made personal choices about whether and when to consult a clinician. Many have now added the internet to their personal health toolbox, helping themselves and their loved ones better understand what might be ailing them. This study was not designed to determine whether the internet has had a good or bad influence on health care. It measures the scope, but not the outcome, of this activity.

Again, 72% of internet users say they looked online for health information within the past year. For brevity’s sake, we will refer to this group as “online health seekers.”

Using a search engine is somewhat associated with being younger. For example, 82% of online health seekers age 18-29 years old say they used Google, Bing, Yahoo, or another search engine, compared with 73% of those ages 50 and older.

Overall, this pattern matches what we found in our very first health survey, conducted in 2000, when just half of U.S. adults had internet access. Then, as now, eight in ten online health seekers started at a general search engine when looking online for health or medical information.

Clinicians are a central resource for information or support

To try to capture an accurate picture of people’s health information seeking strategies, we asked respondents to think about the last time they had a serious health issue and to whom they turned for help:

The vast majority of this care and conversation took place offline (see table below). 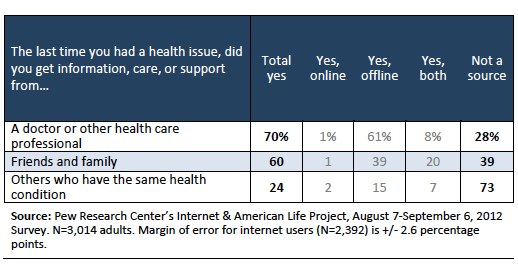 Certain groups are significantly more likely to report calling upon a clinician for health advice: women, adults ages 50 and older, non-Hispanic whites, and adults with at least some college education. Fully three-quarters of people who have health insurance consulted a doctor or other health care professional, compared with half (49%) of the uninsured.

Differences among demographic groups are less apparent when looking at peer health support, but two groups stand out: women and people with health insurance. Twenty-eight percent of women have sought advice from others who have the same health condition, compared with 21% of men. One-quarter (26%) of the insured sought out others with the same health condition, compared to 19% of those without insurance.

These findings reflect differences we first observed in 2010, with little change over the past two years.

Half of online health inquiries are on behalf of someone else

When asked to think about the last time they went online for health or medical information, 39% of internet users who have done this type of research say they looked for information related to their own situation. Another 39% say they looked for information related to someone else’s health or medical situation. And 15% of these internet users say they were looking both on their own and someone else’s behalf.

This trend has not changed significantly since we first began tracking it in 2000: more than half of health searches are conducted on behalf of someone not touching the keyboard.

In past surveys, the Pew Internet Project has not defined a time period for health searches online. This time, the phrase “in the past 12 months” was added to help focus respondents on recent searches.

As one would expect, the percentages dipped for each of the topics we include in the list. For example, 55% of internet users say they looked online for information about a specific disease or medical problem in the past year, compared with 66% of internet users who, in 2010, said they had ever done such a search. 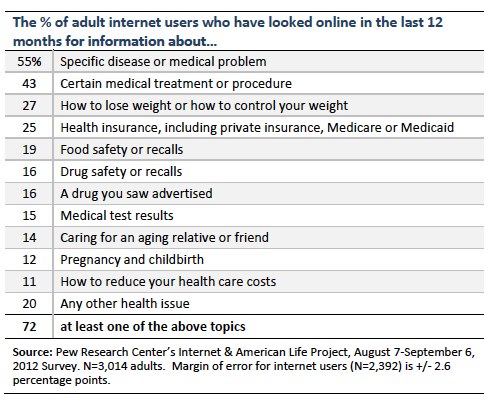 Women are more likely than men to seek health information online, as are internet users with higher levels of education: 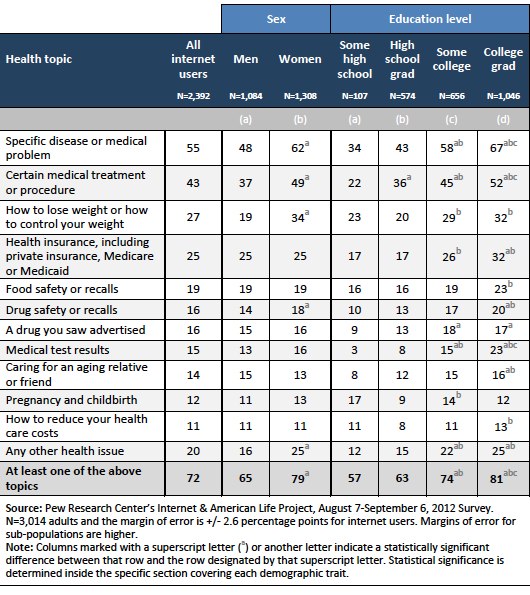 There are only four significant differences among white, African American, and Latino internet users when it comes to health topics: specific diseases, weight control, a drug seen in advertising, and pregnancy. Differences among age groups are a much more mixed bag of topics. 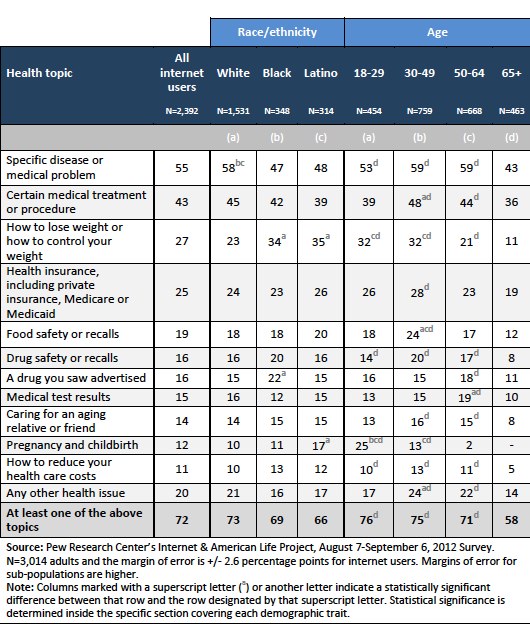 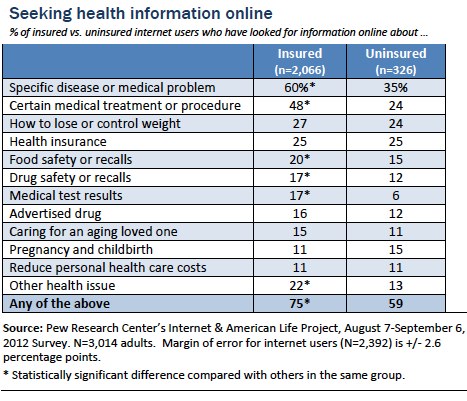 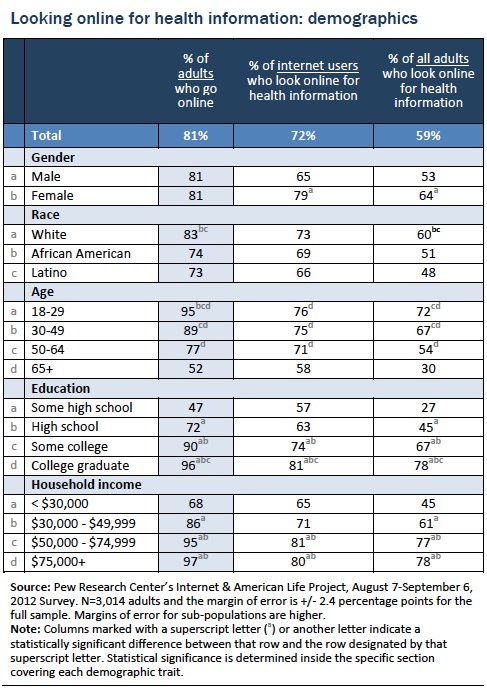 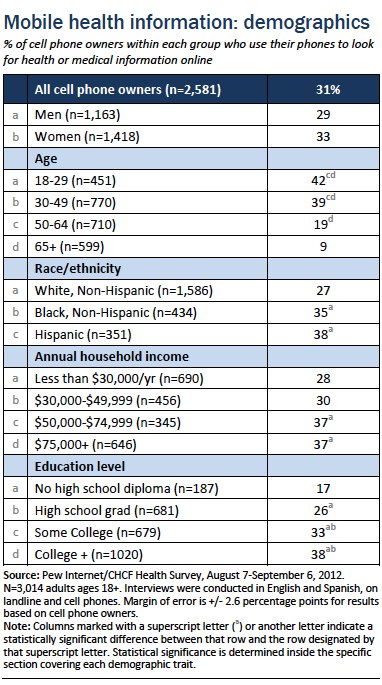 Half of cell phone owners in the U.S. (53%) say that they own a smartphone. This translates to 45% of all American adults. Younger people are more likely than older adults to own a smartphone, as are people with higher income and education levels. 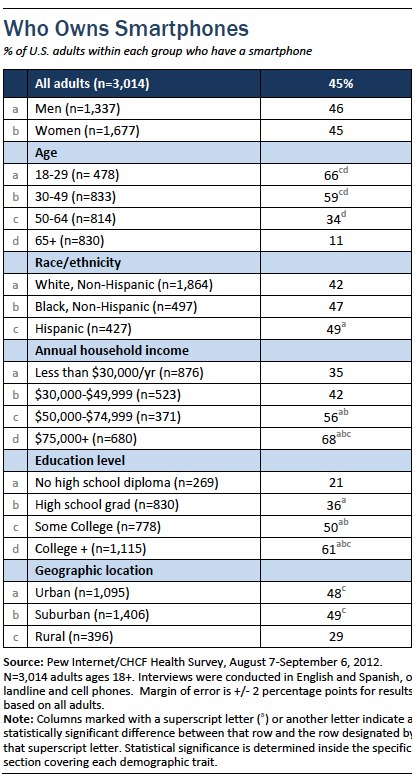 Fifty-two percent of smartphone owners have looked up health information on their phone, compared with just 6% of other cell phone owners.

A person’s likelihood to use his or her cell phone to look for health information is amplified by each of the characteristics identified in the tables above: relative youthfulness, having a higher level of education, living in a higher-income household, being Latino, being African American – and owning a smartphone. Each of these observations holds true under statistical analysis isolating each factor. In other words, it is not just that smartphone owners are likely to be younger than other American adults and both groups are likely to use their phones to look up health information. Each characteristic has an independent effect on mobile health information consumption.

Twenty-six percent of internet users who look online for health information say they have been asked to pay for access to something they wanted to see online. Seventy-three percent say they have not faced this choice while seeking health or medical information online.

Men, women, people of all ages and education levels were equally likely to report hitting a pay wall when looking for health information. Respondents living in lower-income households were significantly more likely than their wealthier counterparts to say they gave up at that point. Wealthier respondents were the likeliest group to say they tried to find the same information elsewhere. No income group was more likely to say they paid the fee.