Some seek counsel from fellow patients and caregivers

We have been interested in the social aspect of online health resources since the very beginning of our project. In 2000, we asked people if they had emailed a doctor and if they participated in an online support group for people who shared the same health issues. As social tools proliferated, we adapted our survey questions to fit the current reality.

Now, instead of naming certain websites or services, we describe an activity and track people’s use of these resources over time. For example, in the current survey, we did not ask specifically about Facebook, instead focusing on more general social interaction which may take place on a variety of sites. We trust that people know what we mean when we ask if they have, for example, posted a health-related question online and we do not particularly need to know how or where they posted it.

The social life of health information is a steady presence in American life. As we noted above, one in four adults (24%) says that they turned to others who have the same health condition during their last bout with illness, essentially the same finding as in our 2010 survey. One in four internet users (26%) have read or watched someone else’s experience about health or medical issues in the last 12 months. And 16% of internet users have gone online to find others who might share the same health concerns in the last year. We explored this phenomenon in greater depth in the 2011 report, Peer-to-peer Healthcare.

Eleven percent of internet users say they have signed up to receive email updates or alerts about health or medical issues in the past year. Twelve percent of internet users have downloaded forms online or applied for health insurance online in the past year, including private insurance, Medicare, or Medicaid. Some of the most striking differences were between those who have health insurance and those who do not (see table below). 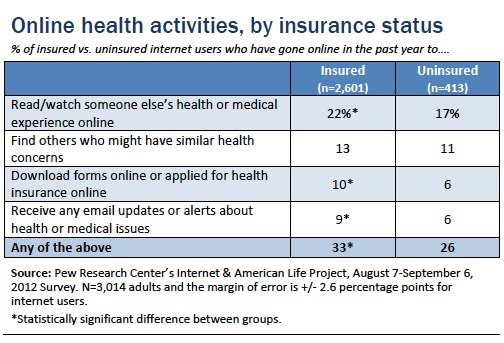 Eight percent of internet users say they have, in the past 12 months, posted a health-related question online or shared their own personal health experience online in any way. Of those:

In addition, 78% of those who posted a comment, story, or question about their health say that they did so to reach a general audience of friends or other internet users. Eleven percent say they posted somewhere specifically to get feedback from a health professional. Four percent replied that they posted for both a general and a professional audience and 5% said neither of those choices fit.

Health care reviews have not caught on among general consumers

The Pew Internet Project has tracked the use of online consumer reviews since 2000 and it has always ranked among the most popular activities in the commercial realm: 8 in 10 internet users say they have researched a product or service online. By contrast, only about one in five internet users have consulted online reviews and rankings of health care service providers and treatments.

When it comes to writing reviews of general-interest items, 37% of internet users say they have rated a product, service, or person online and 32% have posted a comment or review online about product they bought or service they received. People are much less likely to post a review of a treatment, hospital, or clinician – between 3-4% of internet users have done so.

The results for health-related reviews are comparable to those we recorded in 2010. Consulting online reviews of particular drugs or medical treatments, however, took a noticeable dip in the last two years. Some 18% of internet users do so today, compared to 24% in 2010. 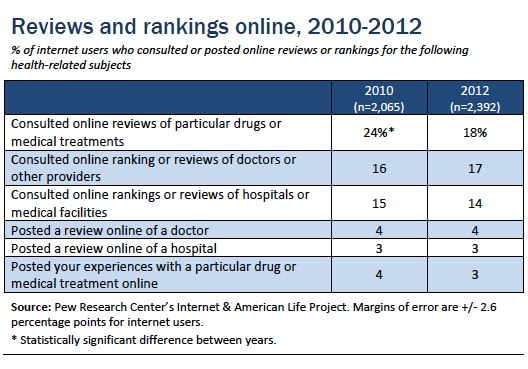 Internet users between the ages of 30-64 years old are the most likely group to say they have consulted online reviews and rankings of health treatments and services. Suburban internet users are more likely than rural internet users to consult online health care reviews. 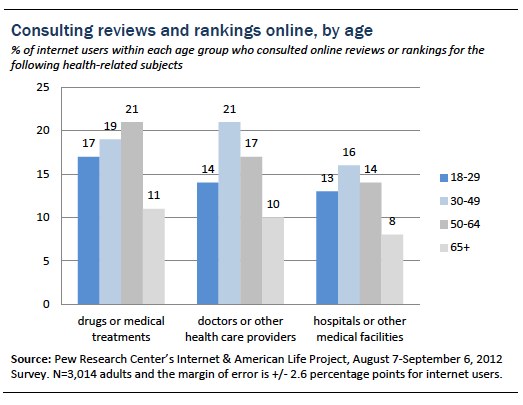 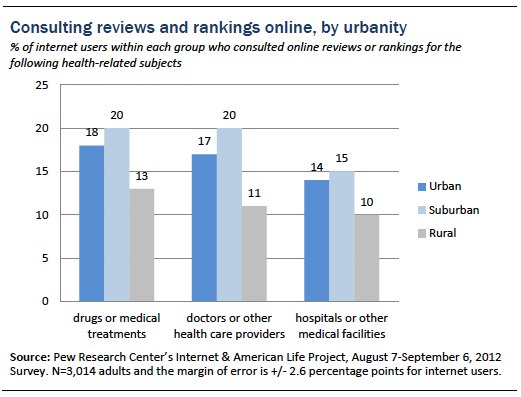 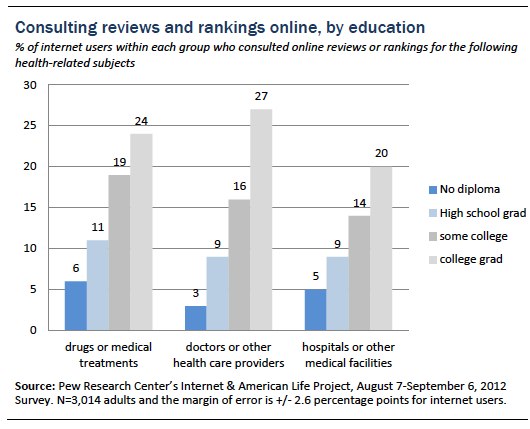 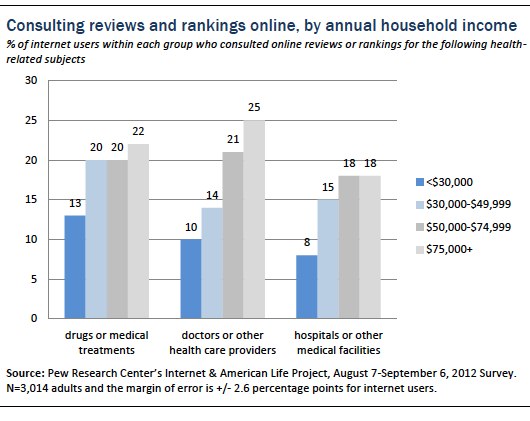 Posting online health reviews and rankings is comparatively infrequent. Just 7% of internet users have ever posted reviews or rankings on any of the the three health topics we surveyed: drugs and medical treatments, doctors, and hospitals. This translates into 6% of American adults. 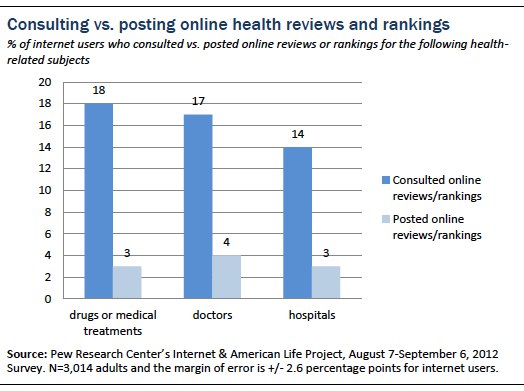 Unlike consulting online health rankings and reviews, there are no clear demographic trends when it comes to posting. (See Appendix for details.)

Next: Appendix
← Prev Page
Page1Page2You are reading page3Page4Page5
Next Page →