Findings: 71% of online adults use online video-sharing sites such as YouTube or Vimeo

More online Americans are using video-sharing sites–and they are doing so more frequently. As of May 2011, 71% of online adults reported watching videos on a video-sharing site such as YouTube or Vimeo. A demographic portrait of these site users is in the table below. 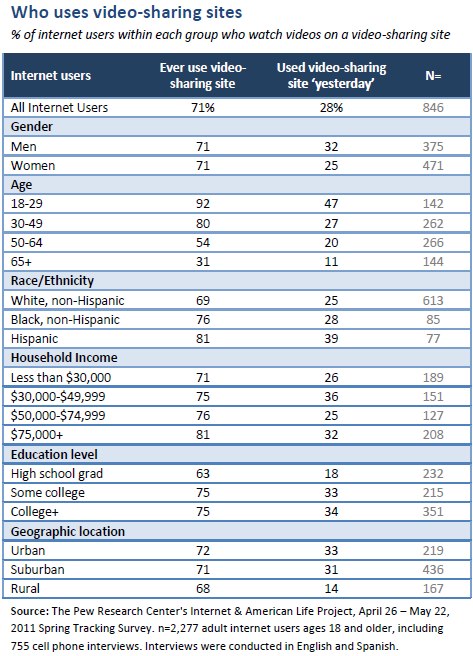 That represents a 5-percentage point increase from the 66% of online adults who reported being video-sharing site users a year earlier and a 38-point increase from five years ago when the Pew Internet Project took its first reading on use of such sites. 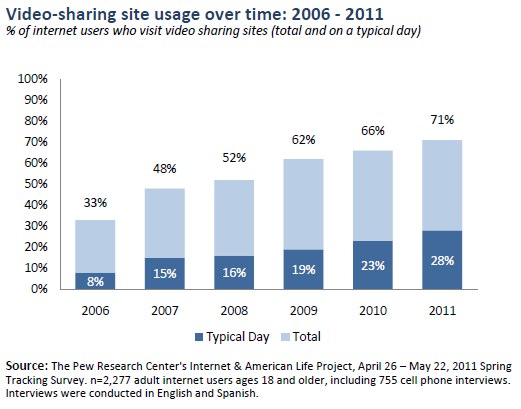 Rural internet users are now just as likely as users in urban and suburban areas to have used these sites. Some 68% of rural internet users have gone to such sites, compared with 71% of online suburbanites and 72% of online urban residents. Those are statistically insignificant differences and show that since 2009, online rural residents have caught up to others in using these sites.

At the same time, rural internet users are still less likely to be visiting video-sharing sites on a typical day (14% vs. 31% and 33% for suburban and urban residents, respectively). 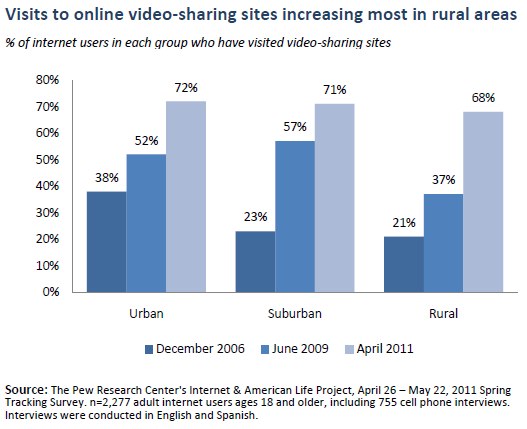 Non-whites are more likely to use video-sharing sites

Another notable and persistent trend is that non-white adult internet users have higher rates of video-sharing site use than their white counterparts, a consistent finding since 2006.1 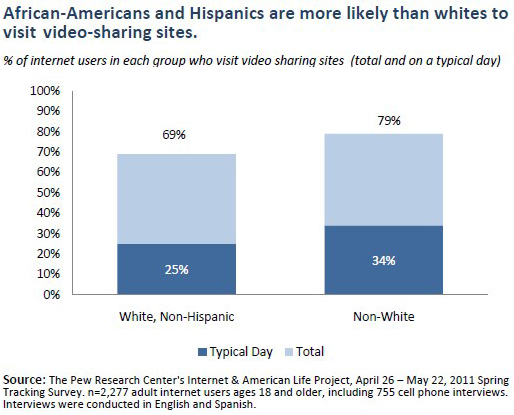 Some 81% of parents in the survey reported visiting video-sharing sites, compared with 61% of the non-parents. Parental use increased 9 points from 72% in May 2010, while non-parental use dipped slightly from the 63% reported in the same survey.3 This increase might also be attributable to the fact that parents with minors at home are younger as a group than the non-parents cohort and use of video-sharing sites is linked to younger users.

Higher use of video-sharing sites coincides with the explosion of content on YouTube, including videos produced by amateurs

Pew Internet has not gotten a comprehensive reading recently on every kind of user-generated video but the Project did ask about mobile devices and video in May 2011. Some 34% of the cell phone owners in the country have shot video with their phone; 26% have watched video on their phone; and 22% have posted videos or photos online. Cell-phone owning men are more likely to watch videos on their mobile devices than women, but both sexes are equally likely to record and post videos. Much like general online group who visit video-sharing sites, blacks and Hispanics have significantly higher proportional viewership on their cell phones. In addition, they are more likely to record a video, and more likely than whites to post a video.