Most online Americans use at least one social networking site, and the demographics of the SNS population are shifting to older users.

Of the things Americans do online, few activities have received as much recent attention as the use of social networking sites (SNS). These sites, which include Facebook, MySpace, LinkedIn, and Twitter are defined by their unique focus on allowing people to “friend” others and share content with other users. By some accounts, Americans spend more time on SNS than doing any other single online activity [2]. 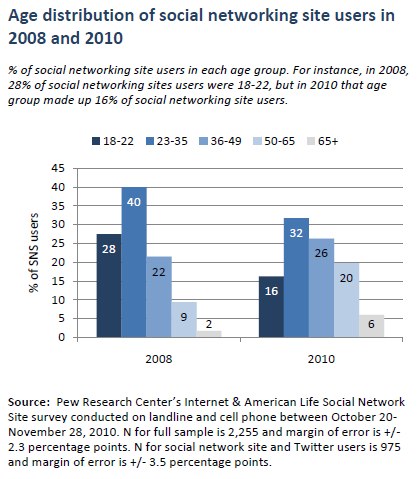 As with the use of most social media, SNS users are disproportionately female (56%). Women also comprise the majority of email users (52% women), users of instant message (55%), bloggers (54%), and those who use a photo sharing service (58%). 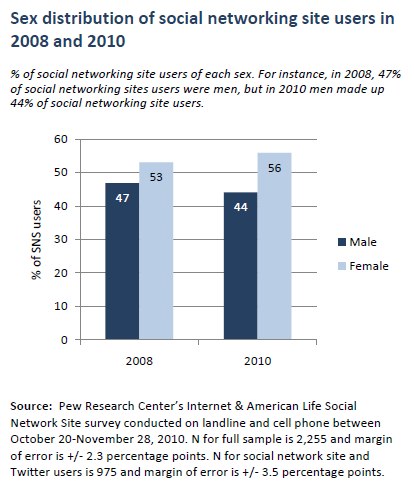 There is a great deal of variation in the age, sex, race, and educational attainment among those who use different SNS platforms. 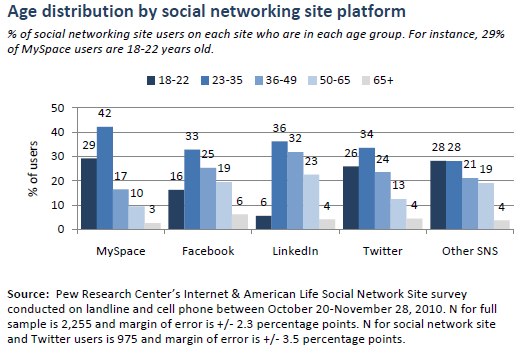 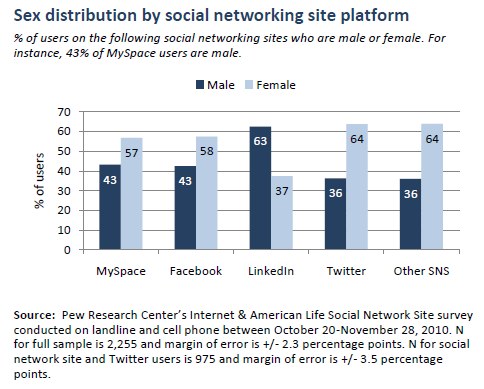 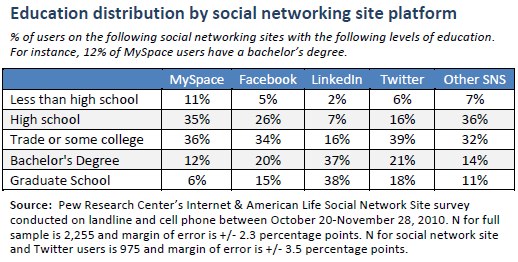 The rise and fall of different social networking site platforms 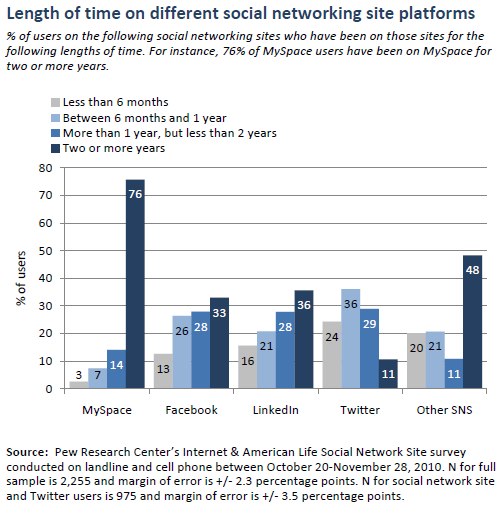 Facebook is the nearly universal social networking site and it has the highest share of users’ daily visits, while MySpace and LinkedIn are occasional destinations.

There is notable variation in the frequency of use of SNS. Facebook and Twitter are used much more frequently by their users than LinkedIn and MySpace. Some 52% of Facebook users and 33% of Twitter users engage with the platform daily, while only 7% of MySpace users and 6% of LinkedIn users do the same. By comparison, 62% of MySpace users, 40% of Twitter users, and 44% of LinkedIn users engage with their SNS less than once per month. Only 6% of Facebook users use this platform less than once per month. 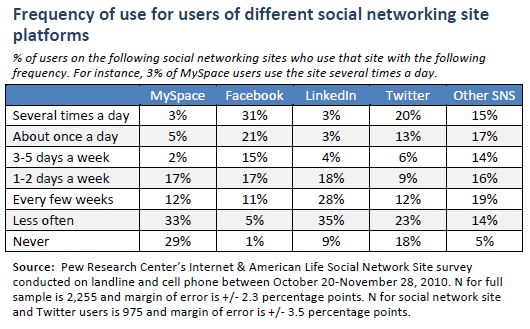 Social network services (SNS) have a number of common features. These include the ability of users to create a list of “friends,” update their “status,” to comment on other users’ statuses and content, to indicate that they like another user’s content, and to send private messages. We asked survey participants to report on the frequency at which they perform these various activities on Facebook.

On an average day:

Most people update their status less than once per week.

Some 18% of women update their Facebook status at least once per day. Only 11% of men do the same. At the same time, Facebook users over the age of 35 are the least likely to have ever updated their Facebook profile or to update their status more than 1-2 days per week. 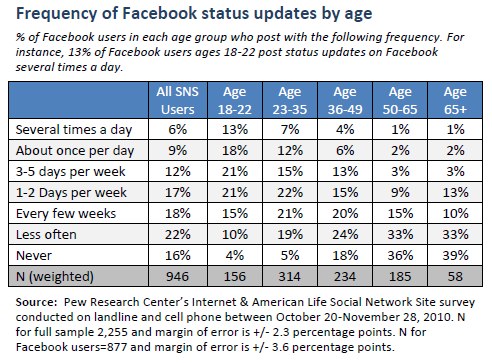 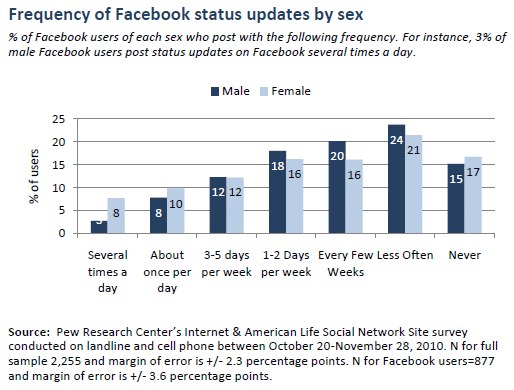 Facebook users are more likely to comment on another user’s status than to update their own status. 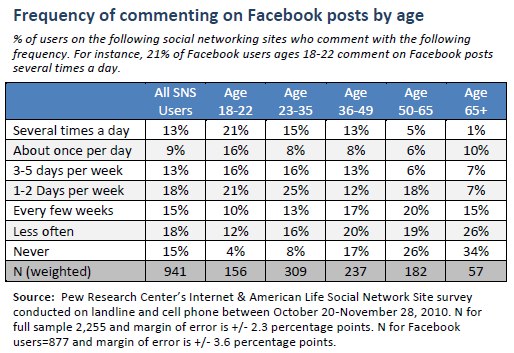 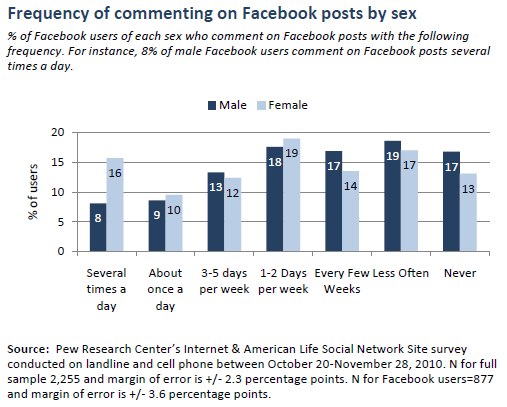 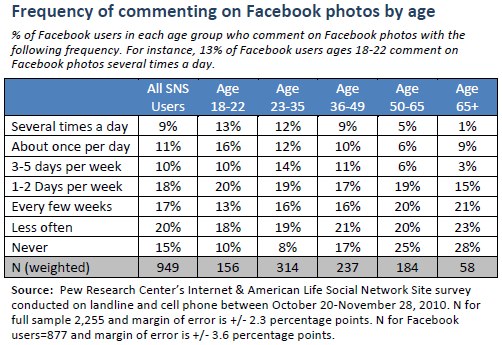 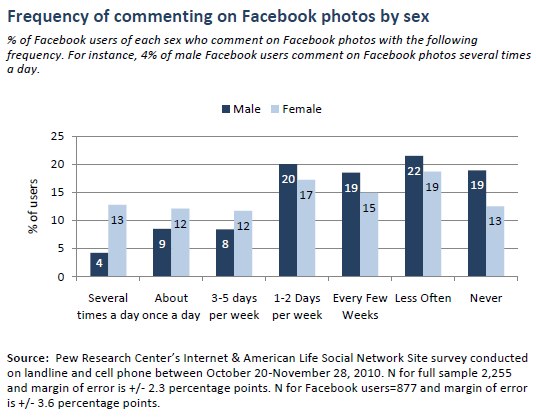 In addition to the option of commenting on status updates and content contributed by other users, Facebook users also have the option of clicking on a button to indicate that they “Like” another user’s content or status. This activity was more popular than any other Facebook activity we measured. 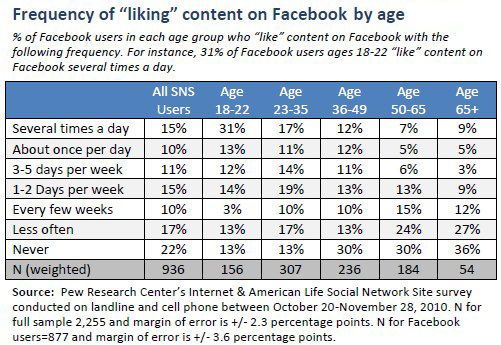 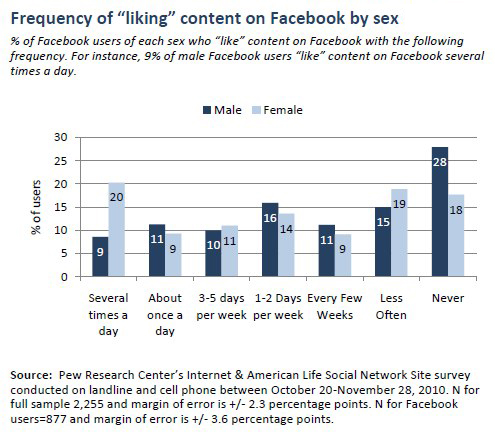 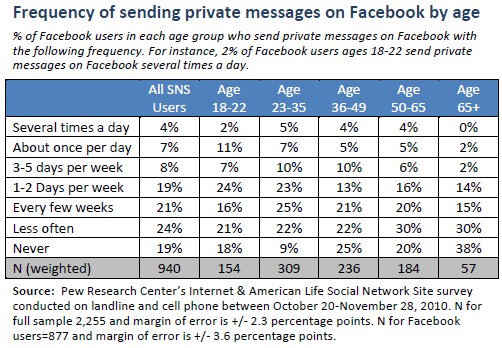 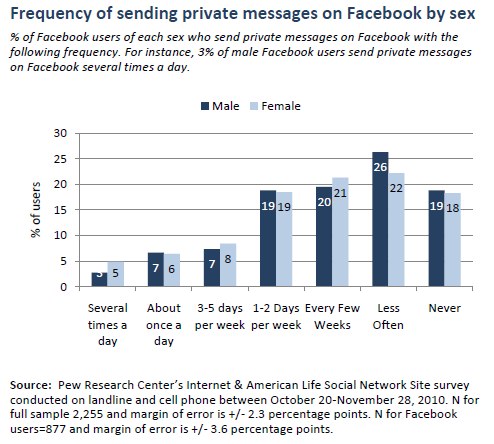