One third of U.S. adults live with at least one of five chronic conditions.

Adults at every stage of life, in good health or poor health, say they use online resources to connect with each other and make better-informed decisions. In a prior report, “The Social Life of Health Information,” the Pew Internet Project and the California HealthCare Foundation reported on how the general population uses the internet to gather and share health advice.12 The current study focuses on people living with chronic diseases.

According to the Centers for Disease Control (CDC), nearly half of adults in the U.S. are living with at least one chronic illness.13 These diseases are among the top killers in the U.S. and represent a significant portion of health care spending.14

Online health resources play a supporting role in many people’s lives as they pursue better health and navigate the health care system, either as passive recipients of advice or as active “partners in their care.”15 Disease-specific patient networks, which have been called “the chicken soup of the internet,” present an opportunity for people to harness social media tools not only for emotional support but to find practical tips and to weigh treatment options.16 There is also a significant investment being made in the Nationwide Health Information Network, which is meant to bring together streams of medical information and ensure its secure exchange between health care consumers and providers.17 However, the question remains: Are online health resources reaching the population most in need?

A national telephone survey, conducted in December 2008, asked about the following five chronic diseases: high blood pressure, lung conditions, heart conditions, diabetes, and cancer. This collection of diseases encompasses the most common conditions affecting Americans, but is narrower than the one used by the CDC, for example. This survey finds that 36% of adults in the U.S. say they are living with at least one of those five conditions and 13% say they have two or more. 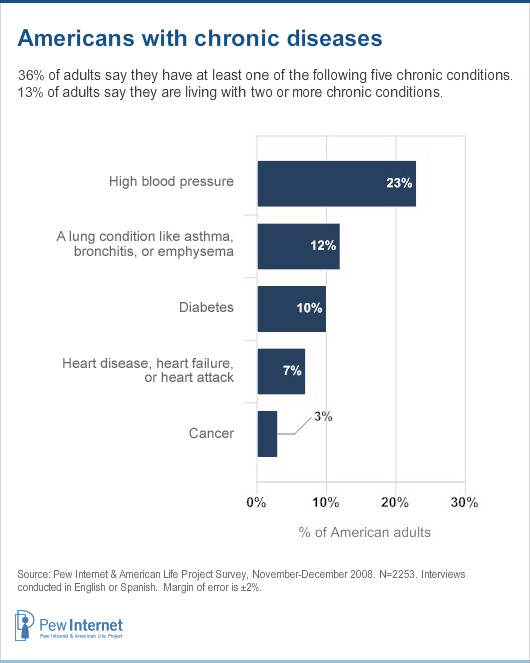 Two-thirds of U.S. adults live with chronic disease – their own or a loved one’s.

The broader footprint of chronic disease emerges when loved ones are taken into account. This survey finds that 29% of adults say that although they do not have a chronic disease, someone close to them has a chronic medical condition such as asthma, diabetes, heart disease, high blood pressure, or cancer. Since half of health searches are conducted on behalf of someone else,18 the social life of chronic disease information may be more wide-ranging than might be suspected by looking only at the population of adults who live with these conditions. A forthcoming report from the Pew Internet Project will focus on family caregivers. 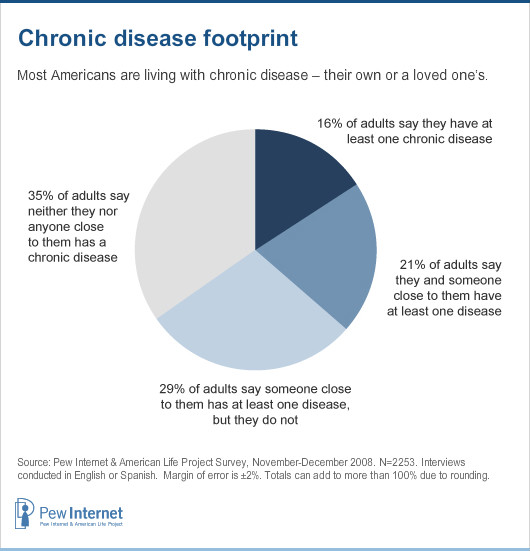 One internet user may collect information to send to multiple friends and relatives, hoping to jump-start an interest in that person’s health. As an e-patient wrote, “Both my brother and sister are diabetics.  Neither is very concerned or tries hard to avoid foods that are bad for them.  I send them reprints and copy anything I find.  I am a pest but they need it.  I also have a 58-year-old friend who is afraid to know his [A1C] numbers.19 I also bombard him.  Not knowing is no longer an excuse.”

These findings are in line with overall trends in public health and technology adoption. Statistically speaking, chronic disease is associated with being older, African American, less educated, and living in a lower-income household.21 By contrast, internet use is statistically associated with being younger, white, college-educated, and living in a higher-income household.22

Thus, it is not surprising that the chronically ill report lower rates of internet access than other adults.  However, when all of these demographic factors are controlled, living with a chronic disease in and of itself has an independent, negative effect on someone’s likelihood to have internet access. 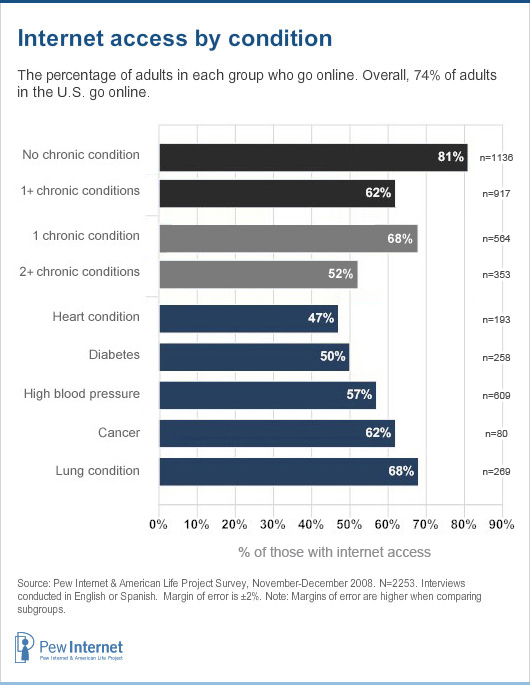 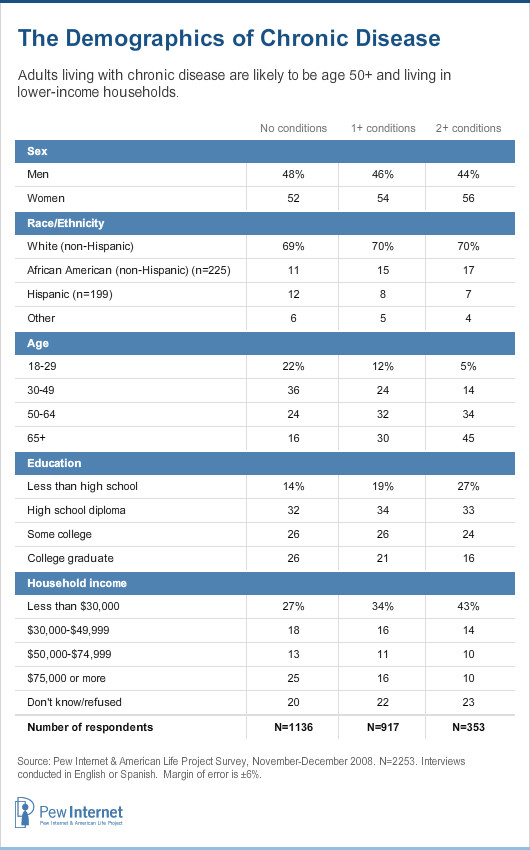 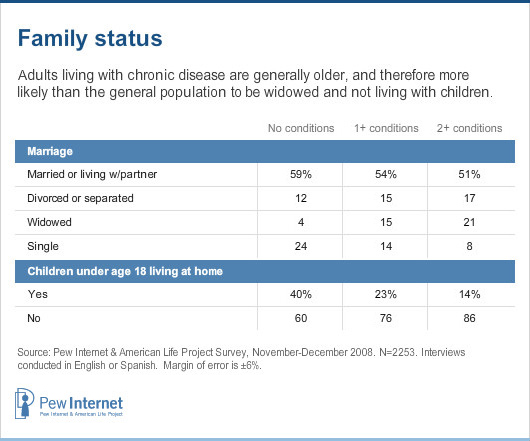 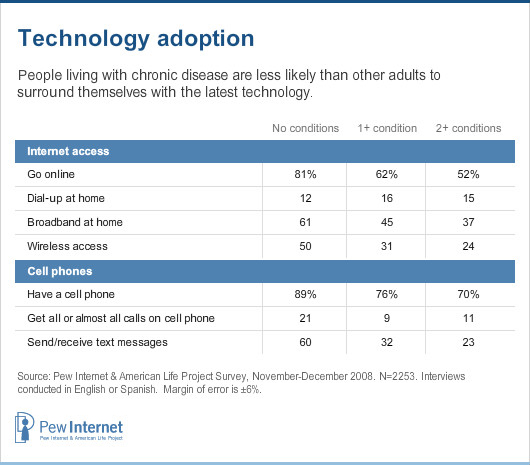 Internet users living with chronic disease generally stay in the shallow end of the online activities pool. They are less likely than internet users who report no chronic conditions to bank online, look for information on Wikipedia, use a social network site, or get financial information online.

Two activities stood out in the analysis, however: blogging and participating in an online discussion. Holding all other variables constant, living with chronic disease increases the probability that an internet user will say they work on a blog or contribute to an online discussion, a listserv, or other online group forum that helps people with personal issues or health problems. These resources allow an internet user to dive deeply into a health topic, using the internet as a communications tool, not simply an information vending machine. 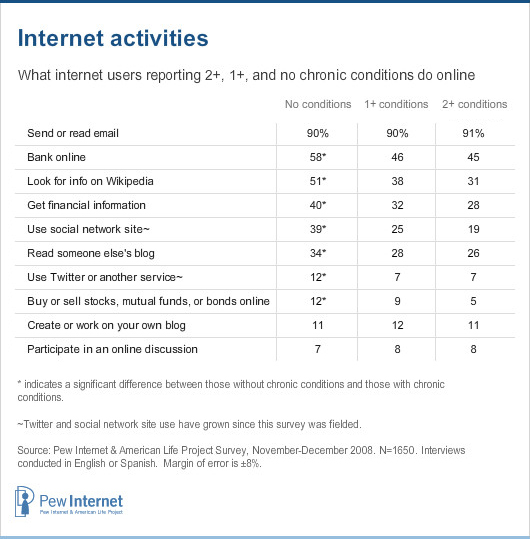 To understand the patterns of technology use among adults, the Pew Internet Project has used statistical techniques to isolate the factors associated with an adventurous engagement in a wide range of online activities. We have consistently found that the older someone is, the less likely they are to sample all that the internet has to offer, as are those with less education and lower incomes.23 In addition, the more an internet user is tethered to a stationary, home internet connection, the less likely they are to venture far and wide online.24

Internet use on a typical day

Chronic Disease and the Internet Acknowledgements
Adults Living With Chronic Disease
One third of U.S. adults live with at least one of five chronic conditions.Two-thirds of U.S. adults live with chronic disease - their own or a loved one's.Internet accessOnline activitiesInternet use on a typical day
Health Information Social Media and Health Impact of Online Health Resources Conclusion Methodology