Americans have used several sources of information and advice in the recession. 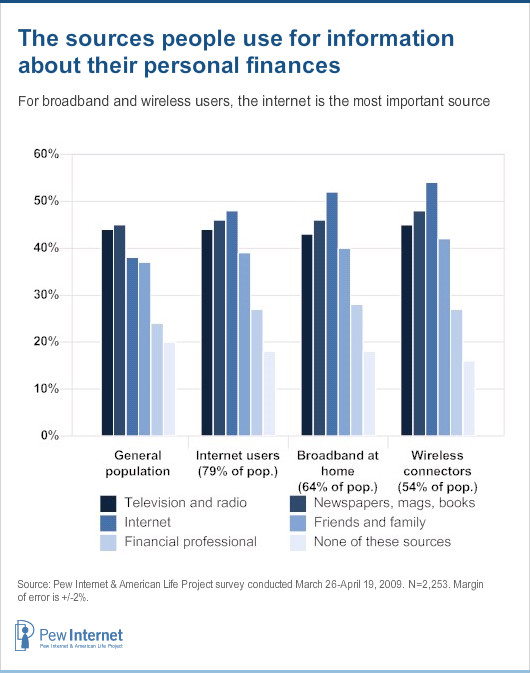 The internet was more likely to be cited as a key source by men, younger adults and upscale Americans than by other groups. At the same time, there were shifting patterns among different age cohorts and socio-economic groups. 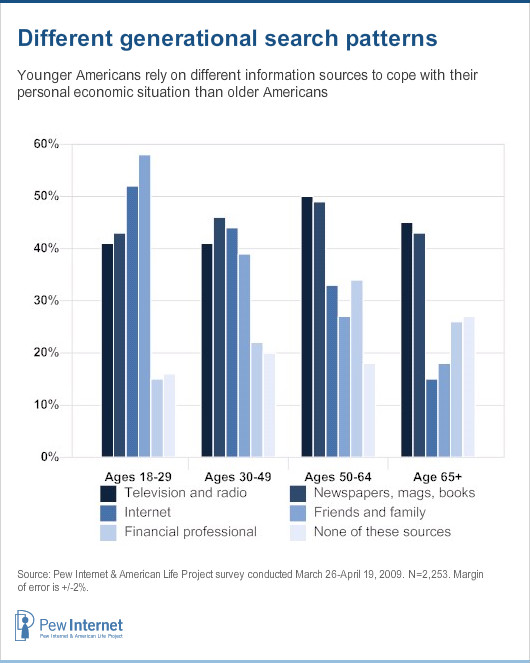 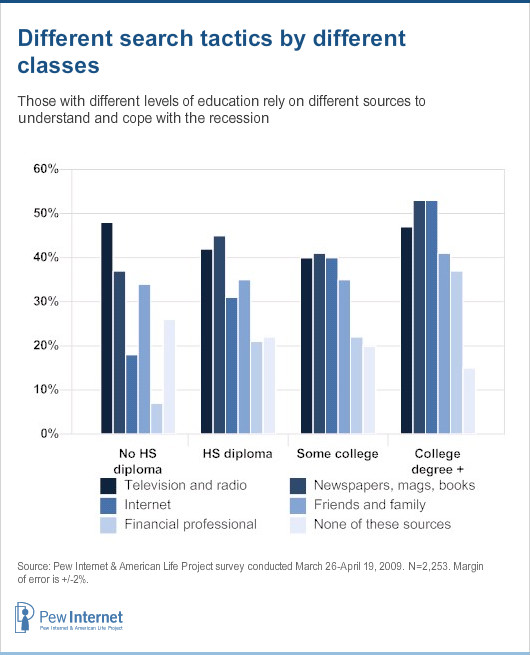 It is also striking to note how extensively people were consulting several sources and reaching out to multiple players in their quest for help. Internet users’ search for advice and understanding was very much a networking activity as people got information and ideas from multiple places and batted them around with the members of their network.

The average American has turned to 1.94 of the sources for information and advice about their personal financial and economic situation during the recession in the past year. Home broadband and wireless users are more intense and broad-ranging searchers than others: broadband users used an average of 2.2 sources and wireless users also used an average of 2.2 sources, while those without internet connections used 1.3 sources. And these heavily connected Americans are more likely to have turned to human sources – that is, friends and family members and professionals – than those who do not have broadband or wireless connections. For instance, 42% of those who connect wirelessly said they have talked to family and friends about their personal financial situation, compared with 25% of those who have no internet connection who have talked to family and friends.

Here is one of the stories from our online survey showing how people networked through their personal and informational sources to help make a decision: “We had been in the market to buy a home for a little less than a year.  As the housing bubble burst our neighborhood (Park Slope, Brooklyn) saw a stagnation in housing prices.  We felt with our rental lease up we should pounce.  We used NYTimes.com to check out open houses. That came after a year in which we had talked to a lot of brokers to get a sense of what we needed to ask. We used online forums (Brooklynian.com and others) to find out about the area and get recommendations for our lawyer.  We talked with our parents and siblings (home owners) and we talked with friends working in finance to determine if it really did make sense to buy. After all this work, we decided it did. We found a place being sold by someone not using a broker. We got approved for the mortgage and got the place.”

The population can be split into four categories of information and advice seekers when it comes to their own personal situation during the recession:

The 59% of Americans who are either medium- or high-level seekers show obvious signs of “networking” behavior. They talk to people, seek updates from media sources like newspapers and broadcast media, and actively search for insights that will help them explain what has happened to the economy and how they might adjust to those changes.

These seekers are like recent grad student Candice Landry, who got her PhD right in the midst of the recession and reached out in every direction she could for insights and advice into the job market. She wrote: “I consumed as much information as possible about which job markets were the most stable, lucrative, and accessible for someone who may be educated though not very experienced in the field. I rallied family, friends, and former colleagues to aid in covering as much ground as possible. This was somewhat beneficial because I learned that alone I had not [located] as many opportunities as I thought I had. Together we used: job databases, scientific journal career pages, newspaper, word or mouth, and even cold solicited companies that we heard about or researched online.”

The kinds of information economic users seek out online

Online economic users – the 69% of adults who search for recession-related material at least occasionally – have been seeking out all kinds of information on the internet to help them cope with the impact of the recession directly on their lives. In descending order, here are the broad categories of information that online economic users have been seeking in their internet searches in the past year:

Price comparisons: 67% of online economic users have used the internet to find the lowest price available for something they need to buy. There were no notable differences in these kinds of searches that were driven by economic circumstances. The hard hit and those not hard hit were equally likely to perform such searches and there were no appreciable differences among households with different income levels. At the same time, younger online economic users (those ages 18-29) were especially active in this area. This was also an area where those with wireless internet connections stood out.

New jobs: 41% of online economic users have sought information in the past year about jobs that might be available. This type of search is especially prevalent among those who had been hard hit by the recession. Job-searches were also popular with young users: 64% of online economic users ages 18-29 have done such searches. Blacks and Hispanics are more likely than whites to have conducted such searches, as are those earning less than $70,000 in household income.

Job searches were a commonplace internet activity even before the recession. In this survey, we found that 41% of all Americans have searched online for jobs, up from 17% when we first asked about the activity in March 2000. On any given day, 9% of internet users were looking for information about a job during the course of this survey.

Advice about protecting personal finances: 25% of online economic users have gone online seeking information about ways to protect their finances in a difficult economy. Again, the hard-hit are more likely to have conducted such searches, as are those on the higher end of the socio-economic spectrum. Those in households earning more than $75,000 and those with college degrees or more are more likely than those with less household income or education to have searched for advice about protecting their personal finances.

Improving skills for a better job: 25% of online economic users have used the internet to seek material about how to improve their skills to qualify for better jobs. This is an especially popular search with younger adults: 43% of the economic users ages 18-29 have done such searches, compared with 19% of those between the ages of 30 and 64. Searches for improving skills were also popular among those in households earning less than $50,000.

Here is a story from our qualitative online survey about how a respondent worked through the process of deciding how to upgrade his skills while seeking the job of an insurance analyst: “I applied for, was interviewed for (a 4-step process), and was offered a new position at my company.  Many of the responsibilities of this new position are familiar, but there is one subject area that I wasn’t very familiar with, so I researched this online, gathered information, saved information for later review and analysis, and made my decision accordingly.  There are professional/educational organizations that deal with this topic (Data Quality), and an industry-standard certification process sponsored by one of these organizations, so I sought out materials online from these groups and reviewed these more carefully.  In addition, I reviewed vendor materials about the data quality tools and resources they offer, although I gave these less importance than I did the trade organization information because of the fact that they are in essence marketing materials and may not be as factual.  And finally I researched the topic of data quality control and assessment in general through science and technology articles in sources such as periodicals and newspapers.  All of this research was done online.”

Sell personal items online: 23% of online economic users have used auction sites or classified ad sites to sell personal items to raise money. Interestingly, there do not appear to be any economic drivers of this behavior. The hard hit and not hard hit, the well to do and the less well off, the employed and not employed are all equally likely to have used the internet to sell goods during the recession. Online economic users under age 50 are somewhat more likely to have done this than their older counterparts.

Unemployment benefits: 22% of online economic users sought material online about unemployment and other government benefits. The hard hit (29%) and those not in the labor force (43%) were especially active doing these searches. And those in lower-income households were also more likely than those in higher income households to have conducted such searches, as were those who only have high school educations or less education than that. 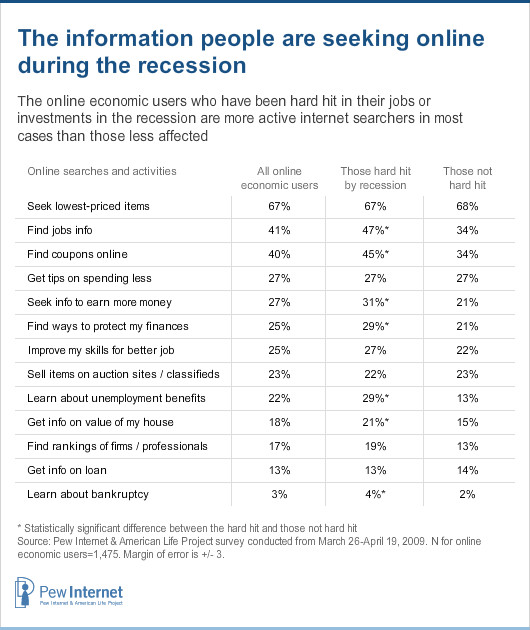 The average online economic user got material on 3.5 of the 13 items which we queried and there were some notable differences between those who were low-level seekers and those who were high level. About 15% of online economic users did not get any material online about the issues that we queried. Presumably they got news and general information about the recession, but were not hunting for any information related to these personal financial issues that we queried.

Some 27% of online economic seekers are “low-level” seekers who have gotten information on one or two of the 13 items. These seekers are somewhat more likely to have avoided a major economic blow during the recession and they are more likely to be male, have high school diplomas or less, and be over age 50.

“Medium-level” seekers are those who have gotten information on three or four of the items on our list. These make up 27% of online economic seekers. They are more likely to be female and have some college courses under their belt but no degree. Otherwise, their demographic profile has no striking elements.

Some 32% of online economic users are “high-level” seekers who have found information about five or more of the items on our list. They are much more likely to be under age 30, have wireless connectivity, have been hard hit by the recession than to have skirted problems (42% vs. 31%), live in households earning $30,000-$50,000.

Next: The role the internet plays as people try to make sense of the recession and react to it
← Prev Page
Page1Page2You are reading page3Page4Page5Page6
Next Page →