69% of all Americans have used the internet in the past year for help in coping with the recession and understanding it.

More than two-thirds of Americans – 69% – have used the internet to help them with personal economic issues that have arisen in the recession and to gather information about the origins and solutions to national economic problems. That amounts to 88% of the adult internet users in the country.

The internet ranks high among sources of information and advice that people are seeking during hard times, especially when it comes to their personal finances and economic circumstances. At the same time, broadcast media outpace the internet as sources of news about national economics and broadcast sources still overshadow the internet among all Americans for information and advice related to their personal financial circumstances. 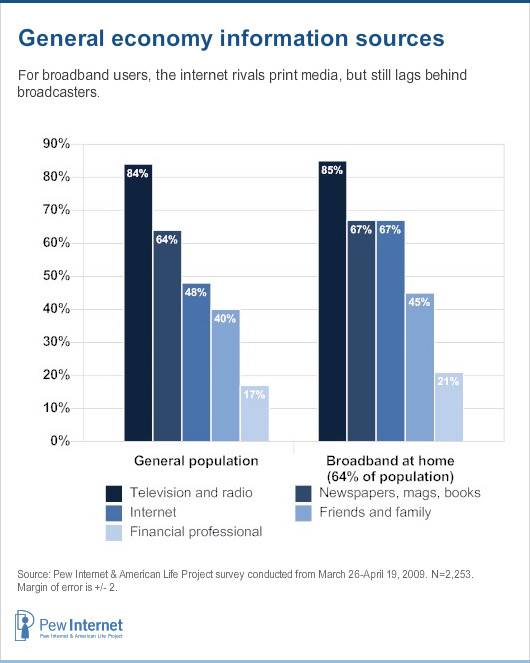 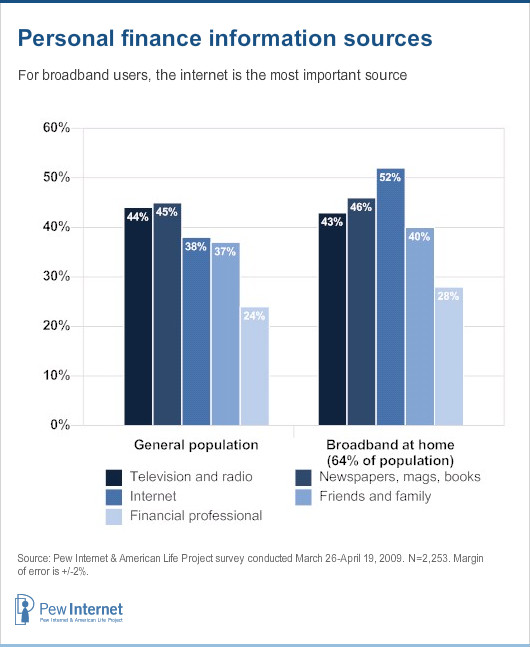 For most of those interested in learning about personal and global finances, though, the quest for understanding and meaning is not an “either/or” matter. People do not either talk to others or consult a single media platform. They forage among sources and communicate with a range of people.

The average American is using two-to-three sources of information to make sense of what is happening and plan personal coping strategies. The process is best understood as networked individuals interacting with networked information. They talk to people, seek updates from media sources like newspapers and broadcast media, and actively search for insights that will help them explain what has happened to the economy and how they might adjust to those changes. Sometimes, they also launch an online conversation or otherwise pitch their ideas into the debate.

Still, the quest for information and advice online is not very intense for most Americans. About a fifth of online adults (18%) say they search at least once a day for recession-related material. About half of internet users say they get such material every few days or less frequently than that.

52% of Americans have been hard hit by economic troubles.

Many of the most active searchers and communicators are those who have been stung badly by the recession. Some 52% of Americans have been hard hit in at least one of these ways:

Bargains and job-related searches lead the way among the kinds of information “online economic users” have sought.

Much of this report deals with a subpopulation we call “online economic users.” They are the 69% of all Americans (and 88% of internet users) who have used the internet for recession-related purposes. Here are the main activities of online economic users in the past year – and in most cases, the hard-hit significantly outpace those who have avoided major economic problems in the past year:

The impact of the internet on people’s views and strategies for coping with the recession.

Most online Americans say their internet use had not changed much and the things they did online did not have tremendous influence on their beliefs and actions.

Still, a sizeable portion of online economic users – the 69% of Americans who have gone online for economic-related purposes during the recession – have reported changes in their views and their actions:

More worried, less confident: Asked whether the things they have learned online have made them more confident or more worried about certain things, more said they were made more anxious than the opposite:

Improved understanding: 36% of online economic users say the things they have learned online have improved their understanding of the nation’s financial crisis, compared with 11% who say they are now more confused because of what they have encountered online.

Going on alert: 13% of online economic users have signed up to receive updates about general economic news or personal financial issues.

34% of online economic users have contributed their own reactions and ideas about the recession on the internet. Their contributions include activities on social network sites and Twitter.

Next: The state of the economy
← Prev Page
You are reading page1Page2Page3Page4Page5Page6
Next Page →

The Internet and the Recession
The state of the economy How the internet, and other sources, have helped people cope with the recession The role the internet plays as people try to make sense of the recession and react to it The impact of the internet About Us, Methodology