Americans have used multiple sources to try to make sense of what is happening in the general economy.

Just as people have options in getting material that helps them cope with stressful circumstances, they also can consult a variety of sources as they try to understand what has happened to the economy and the policies that are being proposed as remedies. So, we also asked respondents in our survey about the methods they had used to try to comprehend what had happened to the financial system and economy.

For the general population – internet users and non-users alike – we found that traditional media outlets were even more important to people as they tried to understand the nation’s economic problems than they were in helping people cope with their own financial issues. For all Americans, printed news media, television, and radio were at the top of the list, ahead of the internet, friends and family members, and professionals. At the same time, we found that for the 79% of Americans who are online, the internet rivaled newspapers as a significant source of information, though internet users still cited television and radio as their top sources. For the 63% of Americans who have high-speed broadband connections at home, the internet again was behind broadcast media, but it ranks aside printed media such as newspapers and magazines as a source of information. That was also the case for the 54% of Americans who connect wirelessly.

In the answers to the online survey among volunteer panelists, there is a pervasive sense that people became more and more transfixed over time by the story of the financial storm that was sweeping the nation through 2008. A typical response came from GeorgeAnn Wence:

I have occasionally monitored the stock market.  As it began to tumble dramatically I took a much more close interest by monitoring every day.  Prior to that, the particular moment for me that caused me to begin to worry about the turn the economy was taking was learning about the shenanigans the financial institutions were up to and how it was destroying some families’ lives…. Now I watch what is happening with the mortgage companies, loan lenders, automakers, etc. worrying about the devaluation my house is undergoing because of this situation. I check throughout each week for what major company/corporation is going bankrupt, being consumed by larger sharks, and dread what might happen to my own financial institution.  I pay closer attention to how rapidly the dollar is devaluing.  I worry about where all this will end, knowing that even when it does it will take a very long time for the American economy to recover. 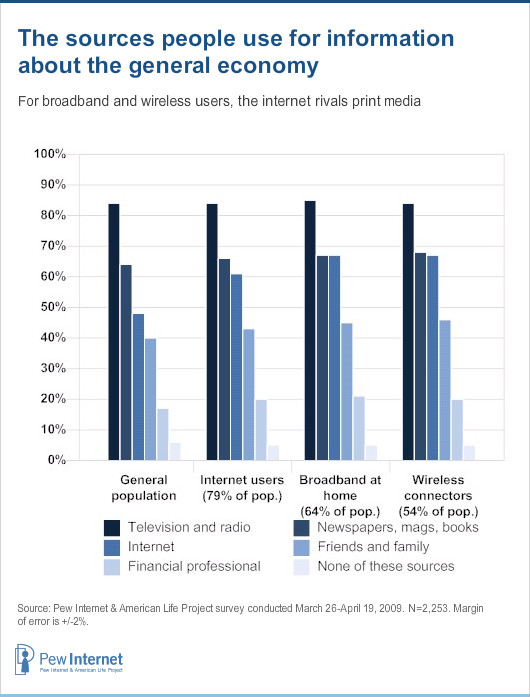 Many seekers turned to multiple sources to comprehend the national problem.

Like Wence, many consulted several sources and reaching out to multiple players in their quest for understanding about what had befallen the national economy and the proposals offered to fix it. The average American has turned to 2.6 of the sources for information and advice about the national economy. Non-internet users averaged 1.8 sources, while home broadband users and wireless connectors averaged 2.9 sources.

The pattern of search and chatter aimed at comprehending the national economy mirrored the networking pattern people pursued when they were trying to meet their personal needs on financial matters. These heavily-connected Americans are more likely to have turned to human sources – e.g. friends and family members and professionals – than those who do not have broadband or wireless connections. For instance, 46% of those who connect wirelessly said they have talked to family and friends about their personal financial situation, compared with 26% of those who have no internet connection who have talked to family and friends about the national economy.

The population can be split into four categories of information and advice seekers when it comes to getting information from various sources about the national economy:

The 80% of Americans who are either medium- or high-level seekers are also networkers. They consume media, do online searches, and talk to people all in a quest to understand what has befallen the economy.

52% of online economic users have used the internet to try to help them understand the nation’s economic woes.

We asked the 69% of American adults whom we call online economic users whether they had specifically turned to the internet to help them try to understand nation’s economic problems. More than half – 52% – said they had. Those who were the most likely to have done so included online economic users who had full- or part-time jobs, those under age 50, and those with college educations and relatively high household income.

It was striking that there were no notable distinctions between those who had been hard hit by the recession and those who had so avoided the worst in their personal economic lives.  There was a general sense in some of the written responses to our online survey that the internet was important as an antidote to traditional media. For instance, Barbara Ellestad wrote: “I rely on Internet sources of information and news more than traditional sources. I think it’s more complete and not based on 30-second blips of filtered news. I can access many different sources of information on the Internet. If I feel any source is biased – as is the main stream media – I can easily go to another source.”

Mary Ann Remnet described a similar motive in the online survey: “Since we live in a ‘sound bite’ society, it is difficult to grasp what is being talked about. I don’t trust analysts and commentators because their job is to ‘spin’ the news. So if I listen to them, I usually go to actual text of legislation, and see if there is anything i can or need to do to protect myself.  I don’t believe that the legislators protect my interests as much as they protect their careers.”

It was also interesting to note that those who voted for Barack Obama in the last election were more likely than backers of John McCain to use the internet to try to understand the nation’s economic problems (61% vs. 51%).

The quest for understanding and meaning is also a networking process. Online survey respondent Sharon Hockensmith wrote about the way she searches and then seeks to comprehend: “I have a friend who is an economist and I email him with questions and comments since he writes a blog. I have friends whose intellect I admire and we talk and email about financial, economic, and news events. I also listen to commentators on Fox Financial News such as Cramer and those on Fox programs like Opening Bell and Happy Hour. I’ve been listening and talking to them about the automakers bailout and have pretty much decided that bankruptcy would be a better route since it would allow the companies to renegotiate labor and vendor contracts to more sustainable levels.”

34% of online economic users have contributed their own reactions and ideas about the recession on the internet. Their contributions include activities on social network sites and Twitter.

This participatory class on economic matters, like many other online groups of participators, is overrepresented in several groups. It is predominantly made up of younger internet users: 40% of online economic users ages 18-29 are participators, compared with 30% of those who are over age 30. It is also more male and more upscale than the general internet population.

A good example of a participator – and influencer – in our online survey is commercial real estate agent Roy Fuchs who has been an active contributor to an extensive group-email discussion that has unfolded over several months:

When I hear something new I first consider the source when I analyze it, then try to place each source or opinion into context.  I have no qualms about passing on a thought to friends, then revising it as I learn more. I spent entirely too much time with a wrench in my hand in high school, 50 years ago, and have retained an interest in the automobile industry ever since.  I remember when GM was the powerhouse of the US auto market.  No more.

So the auto industry bailout story is particularly riveting. Part of my career has been in finance and strategic planning, so I have the context to understand and evaluate the bailout story.  I have believed from the outset that it should seek a pre-packaged Chapter 11 because its first need is to downsize (fewer dealerships, fewer factories, lower costs for its retirees…), and many stories were to the effect that many contracts were voidable only under the protection of the Court.

I have also believed from the outset that blaming their problems on an absence of credit is an act of denial and an easy way to avoid responsibility for over 30 years of poor and in-bred management.  As I heard the CEO testify I came to believe that a process that takes a certain amount of control out of hands would also serve the taxpayer/lender better.   The single point I heard argued against bankruptcy was that no one will buy a car from a bankrupt company.  On one hand I was struck by the fact that too many people in this country don’t know the difference between Barack Obama, Saddam Hussein and Osama bin Laden, so how would they begin to understand the difference between Chapter 11 and Chapter 7?

Still, the participators are not necessarily high-tech or highly-specialized experts. They are moved in some way to use the tools they have to share information or spotlight a cause that matters to them. One illustrative story in our online survey came from Iowan Glenn Leach, who is a Catholic Church volunteer focused on social justice issues: “I have large mailing lists and several listservs devoted to social justice, and economics is certainly central to social justice.  I use these tools to pass on information, to receive information, to communicate with other organizations (non-government organizations, faith-based groups, and legislators) to evaluate issues and respond to them in action or advocacy.”

He says one major catalyst for his postings was the raid by federal agents on a kosher slaughterhouse run by Agriprocessors in Postville, Iowa, in May 2008. More than 300 undocumented workers were rounded up and deported or threatened with deportation. Leach says he posted material on the web commenting on the law, the tactics of authorities, and the plight of families of undocumented immigrants: “Many immigrant women still sit in Postville with GPS [global positioning] devices locked to their ankles, trying to care for their children, trying to simply exist, because as openly undocumented, they cannot work nor qualify for any state or federal aid.  They exist solely on the donations of the people of the town and people from across the U.S. who are responding to the needs created by our government in its blind implementation of broken immigration rules.”

Next: The impact of the internet
← Prev Page
Page1Page2Page3You are reading page4Page5Page6
Next Page →