The American economy has been staggered by financial problems that started in the housing industry and financial sectors but have now spread to most other parts of the domestic and global economy. Families are struggling as large numbers of jobs are being lost or being put at risk, as their ability to keep their houses is challenged, and as their investments lose significant value. Citizens also have to assess the consequences of the massive government bailout of the banking industry and a gigantic portfolio of federal stimulus spending.

This is the most significant economic crisis in the internet era and a unique period of information seeking and communication. There have been other economic crises since the mid-1990s and the beginning of mass adoption of the internet, but none have taken place when the internet was so widely deployed or when the particulars of the crisis have been so extreme. The Pew Research Center’s Internet & American Life Project wanted to examine how Americans were gathering and sharing information in their quest to cope with economic woes. The Project fielded a nationally representative phone survey between March 26 and April 19 to see how Americans were using the internet and other channels for two purposes: first, in seeking information that might help them cope with personal economic tribulations and, second, in getting material to help them understand the causes and proposed policy solutions to the crisis. In all, 2,253 adults were canvassed in the phone survey, including 561 via their cell phones.

In addition to the phone survey, the Project sought extra insight and commentary from Americans in an online survey that was completed by 172 respondents. The respondents were part of a panel of volunteers who have agreed to answer questions from us in occasional surveys. They were asked some, but not all, the same questions as those in the general phone survey and a number of open-ended questions designed to gather qualitative insights into how people were using the internet in the recession. The online survey is not representative of the general population. It was conducted to gather reactions and details that could be included in this report as the “human voice” of the online community. This report will quote from the answers people gave about their searching and coping strategies as they try to make sense of the recession and figure out how to adjust to it. 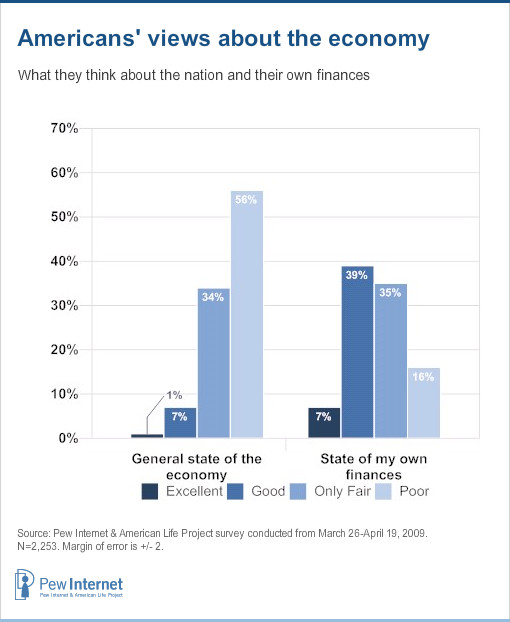 The general pattern to these judgments is easily explained: Those who live in poorer households are more likely to express concern than those who live in upper-income households. Those who have been seriously affected by the economic downturn are more likely to be downcast than those who have been relatively untouched. (See discussion of the “hard hit” below.)

One notable trend comes in the judgments of “worried well-off” about the national economy relative to their own circumstances: 45% of those in households earning more than $75,000 say the state of the national economy is “only fair” while 73% of them describe their own circumstances are excellent or good. Another noteworthy pattern is that the employed report their own financial situation is in decent shape (52% say it is excellent or good), but they are just as likely as the unemployed or retired to say they think the overall economy is troubled. Some 55% of the employed say general economic conditions are poor and 59% of non-workers feel the same way.

Furthermore, compared with non-internet users, those who use the internet were a bit more downcast about the overall economy, but somewhat more upbeat about their own economic situation. Internet users were more likely to say that the general condition of the economy was “only fair” (37% vs. 24% of non-users). Still, 43% of internet users said their personal financial situation was in good shape compared with 28% of non-users who said the same thing. These answers were likely driven by the fact that internet users are more likely than non-users to be employed and to have relatively high income and higher levels of education.

One respondent to our qualitative online survey described the exact moment that the seriousness of the crisis hit home for him: “My big ‘break through the clutter’ moment was September 29 [2008]. I was giving a presentation to a group of co-workers about ‘writing for the web,’ and was bringing up various sites on a big screen to make comments related to their presentation of material. At one point I opened CNN.com and the site had a big red headline ‘Breaking News: Market Drops 600 points’ (or whatever the big drop was at the moment). Everyone in the room gasped or groaned. The impact of that headline on everybody in the room was palpable. I’ve felt similar shudders when I’ve seen similar headlines on smaller screens since that day.”

52% of American adults have suffered a major economic loss during this recession.

More than half of Americans – 52% – have been hit hard in one way or another by the recession. Throughout this report this group will be called the “hard hit.” Those who have suffered major blows include: 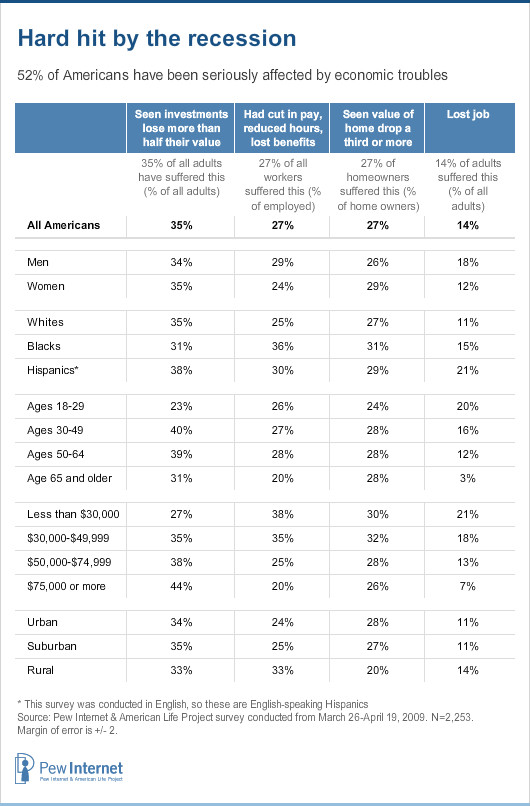 69% of Americans have used the internet to get news, information, and advice about the recession. We call them “online economic users.”

The impact of the recession has been widespread and many Americans are worried about the future. That would give them some incentive to use online resources to stay on top of economic events and interact with others to share news and tips. Indeed, the majority of Americans are using the internet at least modestly for those purposes. Asked a series of questions about whether they have used the internet to get news, information, or advice about the recession, 69% of Americans say they have used the internet for these reasons. This cohort of “online economic users” amounts to 88% of the online population.

A profile of online economic users shows that Americans in these groups are less likely to be in the online economic user population: women, blacks, those over age 65 (and the retired), those with less education, those who live in households with less than $30,000 income, and those in rural areas.

One respondent to our qualitative online survey described her reaction to the news that began to break during the summer of 2008: “I am having more alerts sent to me via email or SMS.  I have a very secure position with the State of Maryland, and am not monitoring my own situation more, but I am monitoring my spending more closely than previously.   I will probably delay my retirement by a few years because my 401(k) supplemental plan has lost a lot of value.  I am old enough to remember my parent’s reaction/response to the 1974 recession, when I was fresh out of college, and see parallels between now and then.”

Overall, internet users are not intensely monitoring breaking economic news, market conditions, or soliciting advice for coping with economic challenges. Some 18% of internet users have gone online for recession-related material at least once a day and for the rest of “online economic users” the frequency of online activity is episodic. Here is the breakdown of how frequently internet users go online for information, news, or advice: 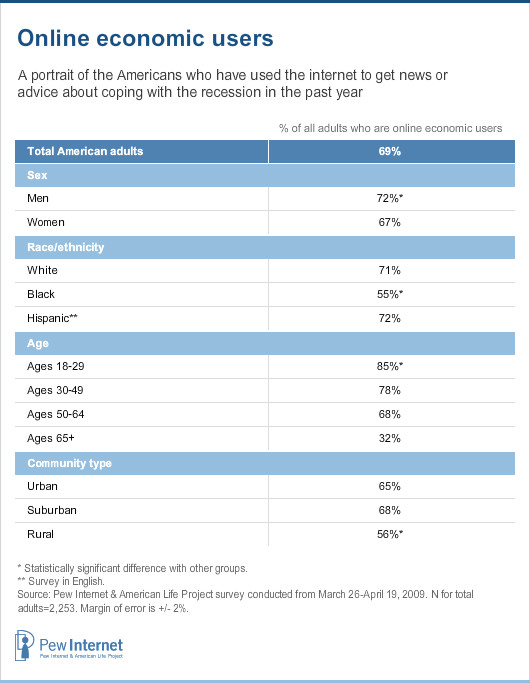 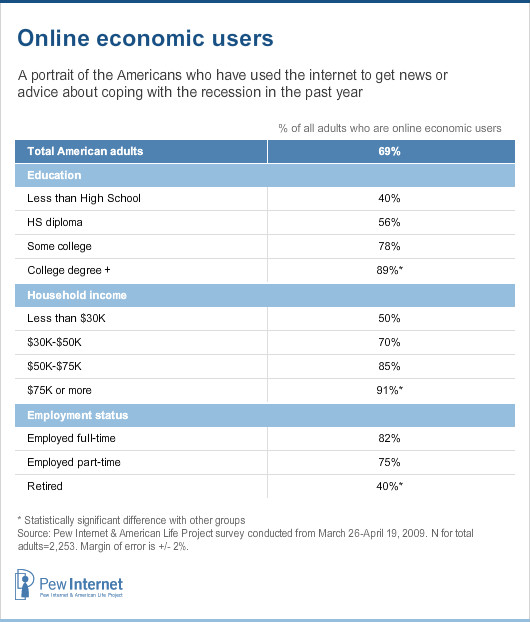 Interestingly, there is no distinct pattern of online activity by those who have been hard hit by the recession. The internet users who have suffered serious setbacks in their jobs and investments are no more likely to be frequent searchers than those who have skirted trouble. Similarly, the online Americans who have a dour sense of the national economy are no more or less likely to do recession-related online activities than those who are relatively sanguine. However, the internet users who describe their own financial situation as good are somewhat more likely to do recession-related searches daily than those who describe their situation as troubled (23% vs. 14%).

Despite the familiarity of the pattern, though, for some online economic users, the recession has spurred them into greater vigilance and more wide-ranging searches. Lynda Armbruster, a business teacher at Santiago Canyon College in Orange, California is emblematic. She says she has started subscriptions to several sources of economic information this year, set up alerts to monitor developments in the real estate and credit industries, and bookmarked a number of new sites that contain information on general financial news, economic trends at various levels (local, national and international). “I have paid much more attention to financial and economic news since the crisis began because I’m nearing retirement age and we have less time to recover from mistakes or downturns,” she wrote in our non-representative online survey. “Since the US started talking about bailouts, I’ve increased my focus on these topics, doing research into historic economic fluctuations (online, of course) and trying to understand all of the complex issues we’re facing in these uncertain times.”

She noted that most of her friends or acquaintances have an interest in these topics, so “perhaps because we are all affected by them so deeply so we communicate via email, phone and in some cases, in person. Some friends are ‘far away’ so our entire conversation on the topics is conducted via email.”

All this activity in the midst of the recession takes place amidst other trends showing that Americans are increasingly likely to perform financial and commercial transactions online and turn to the internet for information about economic matters. This survey included questions about a number of online activities related to personal finances to measure the change in the size of the user population over time. These questions have been asked during times of national economic growth and prosperity as well as more recently in the recession. In this survey:

Clearly, people see the internet as an increasingly useful medium for conducting transactions, making purchases, and seeking information. But they have other choices, too, for all these activities and it is time to turn to a fuller understanding of the sources of information and advice people have used during the past year as they encountered more economic trials.

Though he might not be typical of the entire population, an internet enthusiast like William Kuhns describes why the internet increasingly makes sense as a place for him to manage his finances and act as a consumer:

First and foremost, I use the net, with rare exception, to access and manage all of my/our Life expenses, utility bills, banking etc., and have for many years. As more and more companies and institutions evolved to user-friendly, well-thought-out and secure “store fronts,” the more I was inclined to interact and operate at the cyber level. Financially personally, the net has been an on-demand, critical tool over the last 15 or so years. I rely on easy access to content and easy comparability of information.

I constantly monitor all of my banking and expense issues. I started a while back to re-do our personal budgeting in a more granular way in MS Excel, week by week, and sticking to it. I customize all the pages I can for specific emphasis on world news-world financial news-science and discovery, among other less serious stuff.

My one last wild observation: I think because it is a 7×24, space- and time-independent, flattened, truly connected world, the speed at which “the chickens come home to roost” has increased. It’s hard to deny there are problems when they are in your lap in an instant.

Next: How the internet, and other sources, have helped people cope with the recession
← Prev Page
Page1You are reading page2Page3Page4Page5Page6
Next Page →