Few industries have been disrupted by the digital revolution to the extent music has. In the not-too-distant past, people bought music by going to a store and buying a compact disc. With the advent of the internet and peer-to-peer file sharing, change has been sharp. Shipments of CDs peaked at 942.5 million units in 2000 and fell by 25% to 705 million units in 2005. Figures released earlier this year show that album sales fell by 9.5% in 2007, even though digital sales grew by 45% in this period. This decline in album sales is attributed not only to online file-sharing, but also to leisure dollars competing with other forms of entertainment such as DVDs and video games.12

Some 27% of internet users say they have downloaded music from the internet, according to our March 2006 survey. Given lawsuits over illegal downloading of copyright protected music, not all downloaders may admit to this behavior. Whatever the prevalence of this behavior, downloading music files has challenged the traditional means by which music is marketed and sold.

In this survey, half of respondents (53%) said they had purchased music in the past year, and 26% of respondents were directed to the module with detailed questions about music purchasing. Although online resources greatly influence the music-buying experience, they are by no means dominant and, in fact, music shopping and purchasing maintains a strong offline flavor.

The music buyers use the internet to find out about music, but rely on offline means more.

When asked how they learn about music that they might want to buy or listen to, the old-fashioned ways dominate:

When asked more specifically about online ways in which they learned about music, internet users who had bought music in the prior year cited a variety of different things. The table below shows where internet-using music buyers have found out about music. 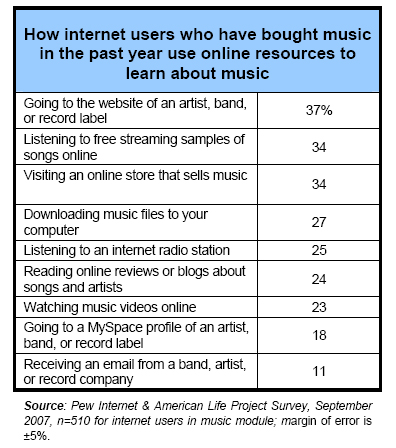 Those with high-speed internet at home are a bit more likely to use any of these online resources for discovering music – 71% have – but they are also more likely to use offline means for music. Some 85% of broadband users in the music module find out about music from radio, TV, or movies, and 69% rely on family, friends, or co-workers.

The internet’s impact is surprisingly muted in how people think about their music purchasing decisions.

When queried about specific ways the internet influenced their music buying decisions, here is what internet users who bought music in the previous year said:

What, where, and how they buy music

Even with the potential to buy music online via digital downloads to a personal computer, most music buying is done the old-fashioned way – by going to a store and buying a compact disc. When asked about all the music bought in the past year, here is how the numbers break down for respondents who received the module of questions on music purchasing:

When asked where they most recently purchased music, the vast majority (74%) of music buyers say they went to a store, while 22% say they bought music online. Even among those who use the internet to find out about music, one-third (33%) said their most recent purchase was executed online.

13% of music buyers say their most recent music purchase was a digital download of music files.

Among the 22% of music purchasers who bought most recently online, most (61%) could have bought their music in a store, with 35% saying they could not have done that. Just 7% of online music purchasers said they visited a store to sample music or ask for some help before getting their music online.

Although most respondents, when thinking of their most recent purchase of music, say they bought at a store, it is possible that information they found online influenced their decision. After all, half of music purchasers said they learn about music using at least two online means. Nonetheless, online information has a modest impact on music purchases. When asked whether information found online had a major impact, minor impact, or no impact at all, here is what music buyers who used the internet in their research said:

The internet plays a critical role in how online users engage with music after they have bought it.

The enjoyment of music is often a group experience, not only through live performances but also by sharing with others thoughts about the new tunes recently purchased. We asked music purchasers what kinds of things they do after they buy music that may extend the music-listening experience. 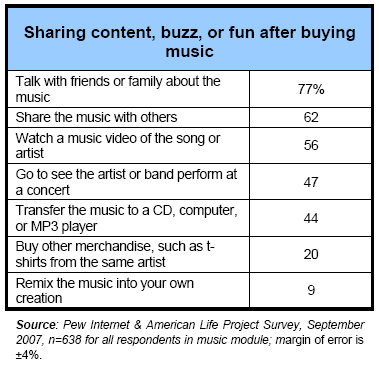 As is the case with finding out about music, the post-purchase chatter is centered around family and friends. Even sharing music is done mostly outside the bounds of cyberspace. When asked how they share music, 73% of those who said they had shared music with others said they gave someone a CD, while 2% said they did this online; some 7% did both while 18% could not recall. With 44% of music buyers transferring music to a CD, computer, or MP3 player, it is possible that some of this sharing through giving a CD to someone involves digital transformation of the music content.

Even though online resources have small impacts on pre-purchase decisions, they play a significant role after the purchase as tools to help music buyers learn more about music. 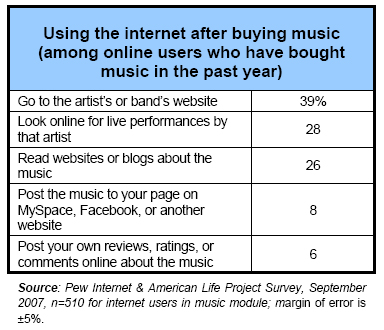 Some 13% of internet-using music buyers either post their music to a social networking site such as Facebook or post their own reviews of the music they purchase.

It is not a surprise that, in the adult population, younger people are more involved in chatter relating to music. To conduct an analysis of music buying decision by age, we divide the adult population into three groups: ages 18 to 35, 36 to 50, and over 51.13 When asked generally about how they learn about music they may want to purchase, here is what respondents said across three age categories. 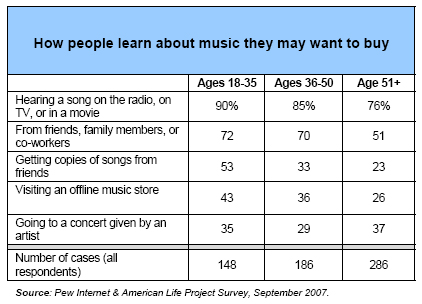 Younger adults are generally more likely to use each of the means listed to learn about music they may want to purchase. 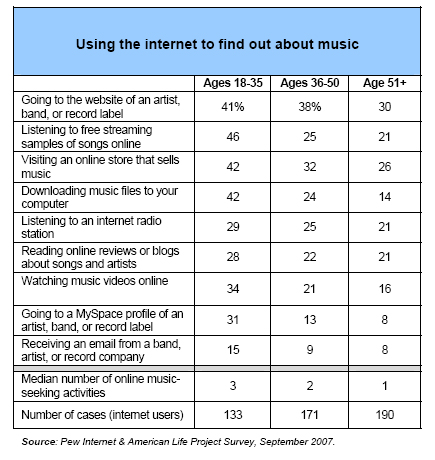 Younger adults are more likely to do each of the online music searching activities than older ones, as well as a wider scope of things. The large differences across age groups are evident when it comes to listening to free music samples online, downloading music to a computer, and using MySpace. As the table shows, the median number of places young music purchasers turn to online is 3 – more than the middle and older age groups.

Some 78% of online adults under 36 use at least one of the listed online means to learn about music they may want to buy. The corresponding figures for those in the 36 to 50 and age 51 and over cohorts are 66% and 59% respectively. Put differently (since not all respondents are internet users), 70% of adults age 35 and under turn to the internet to find out about music they may want to buy, while 55% of those between 36 and 50 do, and 32% of those over age 50 do.

Similar patterns emerge when examining after-purchase behavior. Younger music buyers are more active in these behaviors, especially when it comes to posting music to their page at MySpace or Facebook or posting their own reviews of the music they have bought. 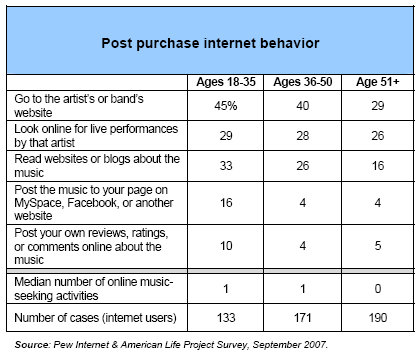 These generational differences in pre- and post-purchase online music behavior do not translate into profound differences in purchasing behavior. For adults under age 35:

There are, however, large differences in the composition of music purchases across age groups. 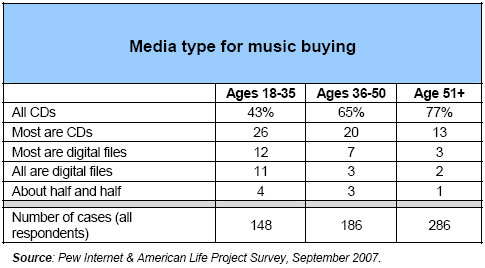 It is notable that, for the “under 36” group of adults, 27% are reasonably active purchasers of music in digital files, more than twice the rate of those over the age of 35.

If only a minority of music buyers use online resources in the purchase process, why all the fuss in the music industry?

In one respect, it is possible to look at the data and wonder why the music industry has been so shaken by the internet. After all, only 12% of music buyers report that they purchase digital music files, just 23% of internet-using music buyers say online resources were most important to their decision, and 63% say online information had no impact on their most recent purchase.

It is important to note that the industry evolved in the last century with an infrastructure oriented to delivering music in stores, on CDs, and with most of the inventory consisting of albums from artists signed to labels. Even 10% of buyers seeking an alternative path (e.g., downloading digital files) can have large impacts on the model. When 23% of younger internet-using buyers, arguably the most active and attractive customers, purchase mostly or entirely digital files, the disruption is consequential.

Finally, and not least, is illegal downloading of music online. This activity unquestionably occurs, although its scope and impact on music sales is far from a settled issue.14 Nonetheless, even some level of this activity, in conjunction with people turning to paid downloading sites such as iTunes for music, understandably upsets the established models for marketing music.

Next: Buying a cell phone and online resources
← Prev Page
Page1Page2Page3You are reading page4Page5Page6Page7Page8
Next Page →

The Internet and Consumer Choice Acknowledgments Introduction
The Internet and Purchasing Music
IntroductionThe music buyers use the internet to find out about music, but rely on offline means more.The internet’s impact is surprisingly muted in how people think about their music purchasing decisions.The internet plays a critical role in how online users engage with music after they have bought it.That’s right, young people are more online-oriented than older folks.If only a minority of music buyers use online resources in the purchase process, why all the fuss in the music industry?
Buying a cell phone and online resources The Internet and Finding Place to Live Conclusion Methodology