Cell phones have become a staple for many Americans, with 78% of adults now having one, up from 21% in 1996. With many cell phone allowing users to have free or low-cost upgrades of phones every 24 months, decisions on new cell phone purchases periodically face users.

In this survey, 39% of adults said that they had bought a cell phone in the previous year. Some 26% of adults were directed to the cell phone module of questions in the survey that asked about the decision-making process in buying a new cell phone. A range of reasons were cited as to why people bought a new phone.

Remaining responses, all in the low single digits of incidence, included people getting their first phone, losing their old one, or buying a phone for someone else.

As noted in the Methodology section at the end of this report, the sample for this survey included cell phone numbers. Some 129 respondents in the sample of 2,400 were cell phone users, with about half of respondents reached by cell phone reporting they use only a cell phone for telephone communication and do not have a landline phone at home. In the cell phone module, one-third of respondents were contacted on their cell phone and 6% identified themselves as “cell phone only” users.

A salesperson and a visit to a store take the prize as to how people gather information about a cell phone.

The information-gathering process involved with buying a cell phone has a number of steps and stops:

Nearly all (93%) of cell phone shoppers sought out one of the people or sources listed above, two-thirds consulted at least two, and 41% at least three.

The 39% of those who consulted the internet before buying a cell phone took advantage of several different kinds of online resources. 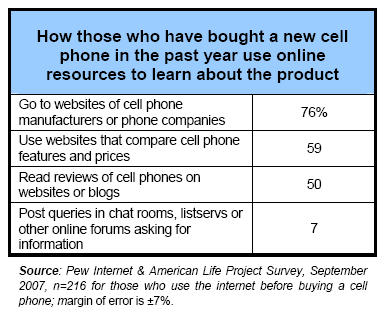 Some 88% of those who used the internet to investigate a cell phone purchased used at least one of the resources in the table above, and the median number of sources explored was 2.

Online information influences the brand cell buyers choose, the money they spend, and the features they choose.

The specific impacts of online information pre-purchase unfold as follows among those who have availed themselves of the internet for their cell phone research:

The overwhelming majority of cell phone buyers make the purchase in a store – some 78% do, with 12% buying online and 9% by some other means. Among the narrower set of those who use the internet in their cell phone research, 26% bought their device online.

With the sizable influence online information exerts on 39% of cell phone purchasers, it is understandable that this group is more likely to buy their phones online. Some 26% of this group bought a cell phone online, although 70% still go down to the store.

All in all, people who have bought a cell phone in the past year come away satisfied. Fully 78% say they had the right amount of information in making their choice, with just 7% saying they had too little information and 11% too much. And 87% are satisfied with their phone and their service – 52% describing themselves as “very satisfied” and 35% as “somewhat satisfied.” About half (46%) say they have recommended to others that they buy the phone they purchased, with most of the rest (44%) saying they have offered no advice to others on whether or not to get the particular phone they bought.

87% of those who bought a cell phone in the prior year are satisfied with their phone and their service.

After they buy a phone, few internet users turn to the internet for troubleshooting, posting a rating, or sharing experiences.

Cell phones are feature-rich and reasonably complex electronic devices that often require a user to spend time with a new device to figure it out and, perhaps, to troubleshoot kinks encountered. Most people (68%) take to the owner’s manual to figure out the new device. Some people will go further, especially if they meet a problem that they can’t address themselves. Here is what cell phone buyers said they did when they encountered problems with their cell phone:

In terms of sharing general opinions about a new cell phone, most people (60%) say they have talked about a new device with friends, family, or co-workers.

The internet, however, does not play a large role in after-purchase chatter or inquiry:

Some 13% of internet users who got a new cell phone in the past year did at least one of the three after-purchase online chatter activities. When including post-purchase online activity relating to troubleshooting (i.e., going online for help or consulting an online forum), some 19% of internet users who bought a phone in the prior year turned to the internet after their purchase regarding something relating to it.

Next: The Internet and Finding Place to Live
← Prev Page
Page1Page2Page3Page4You are reading page5Page6Page7Page8
Next Page →

The Rise of Apps Culture
Americans and Their Cell Phones
Polling in the age of cell phones
Half of adult cell phone owners have apps on their phones
Adults and Cell Phone Distractions
So far, Trump has granted clemency less frequently than any president in modern history
Biden Begins Presidency With Positive Ratings; Trump Departs With Lowest-Ever Job Mark
Quiz: Where do you fit in the political typology?
Intent to Get a COVID-19 Vaccine Rises to 60% as Confidence in Research and Development Process Increases
What the 2020 electorate looks like by party, race and ethnicity, age, education and religion