Online teens as a whole are quite active offline, though less so than certain subgroups of users such as content creators and social network users. Half the online teens in this survey report being part of a school sports program, 36% report being part of a school club like drama or language, 42% report taking part in some other extracurricular activity like band, and 58% report participating in an after-school club or sports program that is not affiliated with school.  These percentages are consistent with the numbers reported in the 2004 Teens and Parents survey.22

When it comes to teens’ internet use, information gathering trumps communication activities.

While teen internet behaviors around social networks and content creation have been getting plenty of recent attention, teens still engage in a variety of activities online that cross the spectrum, from information seeking to communicative and creative endeavors.  While content creation is an important and growing online activity, the two most popular internet activities among teens in the most recent Pew Internet Teens and Parents survey have to do with information gathering rather than communicating. 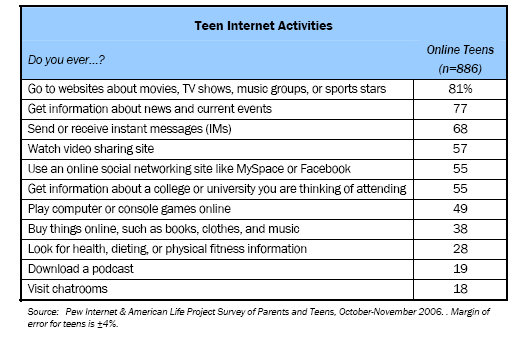 While entertainment information seeking is the most popular internet activity in this survey (81%), the percentage of online teens who use the internet to get news or information about current events also remains high (76% in 2004 vs. 77% in 2006). There are no statistically significant differences between the number of male and female teens who look for news (both hard news and entertainment news) online.

Girls are more likely than boys to look up health, dieting, or fitness information on the Web.

Twenty-eight percent of online teens say they use the Web to find information about health, dieting, or physical fitness, which is not a significant change from the 31% of teens in 2004 who said they used the Web to learn about these topics. As in 2004, there is a statistically significant difference between the sexes in terms of the popularity of this activity. Over one-third (34%) of online teen girls report looking up information about health, dieting, or physical fitness, compared with only 22% of boys.  In general, older girls (ages 15 to 17) are more likely to report using the internet to find information about these topics.

The number of teens who report instant message use has dropped since 2004.

However, as we have seen consistently over time, the most active users of instant messaging are older girls – 82% of online girls ages 15-17 report that they use IM. This fits with our other findings which situate older girls as the most active communicators. Not only are there statistically significant differences between the number of girls who report that they use instant messaging (74%) and the number of boys (62%) who report doing so, but there are also significant differences between the percentage of teens ages 15-17 who use instant messaging (77%) compared with the percentage of teens ages 12-14 who instant message (60%).

Visiting a chatroom has declined significantly in popularity since 2000.

In 2000, 55% of online teens reported going to online chatrooms, while in 2006, only 18% of teens say they visited chatrooms.23 Since 2000, there have been prominent campaigns to raise awareness among parents and teens about the possible dangers of the chatroom space, which may have contributed to the drop in the popularity of chatrooms. Chatrooms are also a fairly old method of communicating with others on the internet, and it could also be that teens find that using newer means of communication such as instant messaging or sending messages over social networks are safer and more attractive internet activities.

Over half of all online teens use social networking sites.

Fully 55% of online teens in this survey reported using social network sites like MySpace or Facebook. In general, girls are more likely than boys to use social networking sites (49% of boys compared with 61% of girls), and older teens are more likely to visit these sites than younger teens (47% of those age 12-14 say they go to social networking sites compared with 63% of 15-17 year olds). While only a bit over half of all online teens report having ever gone to a social network site, 70% percent of online girls aged 15-17 say that they have done so. For more detail on this topic, see the Teens and Social Networking data memo.24

The number of online teens who buy products like books, clothing, or music online decreased to a statistically significant degree from 43% in 2004 to 38% in 2006. While there are no clear reasons why teens are less likely to have purchased something online, we do find that there is a relationship between the amount of money made by the parents and the likelihood that the teen will buy items online. Online teens with high-income parents are more likely to buy items online than online teens whose parents earn less money.

More than half of all online teens visit video sharing sites.

Podcasting is a relatively new activity for the Pew Internet & American Life Project to track, and as such, was not included in the 2000 or 2004 Parents and Teens surveys. Almost one-fifth of online teens (19%) say that they download podcasts in the latest survey. Online teens whose parents have at least a college education are more likely to download podcasts so they can listen to or view them at another time than teens with parents who have lower levels of education.

This survey includes a number of online activities that we have not included in previous surveys, such as going to video sharing sites, using social networking sites, and downloading podcasts. Online teens whose parents are affluent and well educated are more likely to have engaged with a wider range of these newer internet activities such as downloading podcasts and visiting video sharing sites than online teens whose parents are less educated and have lower incomes. As noted in the Online Video report,25 wealthier people are more likely to have broadband connections that enable access to a richer array of online activities and content.

Almost half of all online teens say they play games online.

Teens are more likely to own desktop computers than any other type of digital technology.

Not surprisingly, the more money their parents earn, the more likely teens are to own a large array of gadgets (including laptops, cell phones, and iPods). Older teens are more likely to report owning desktop computers than younger teens.

The majority of teens have a positive attitude toward gadgets. 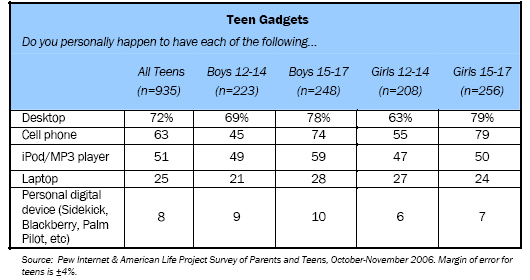 Teens and Social Media Acknowledgments Teens creating content Communications and social media
Teens’ online activities and gadgets
IntroductionOnline teens continue to lead active offline lives.When it comes to teens’ internet use, information gathering trumps communication activities.African American teens are more likely to look for college information online.Girls are more likely than boys to look up health, dieting, or fitness information on the Web.The number of teens who report instant message use has dropped since 2004.Visiting a chatroom has declined significantly in popularity since 2000.Over half of all online teens use social networking sites.Fewer teens are buying products online.More than half of all online teens visit video sharing sites.Wealthy teens are more likely to engage in multimedia Web activities.Almost half of all online teens say they play games online.Teens are more likely to own desktop computers than any other type of digital technology.The majority of teens have a positive attitude toward gadgets.
Methodology