Despite the influx of digital media into their lives, teens continue to rely on telephones to keep in touch with their friends.

While text-based digital communication technologies are increasingly prevalent, the telephone continues to reign as the instrument of choice when teenagers want to interact with their friends. However, those who have cell phones and those who are avid internet users have different communications profiles from the entire teen population. 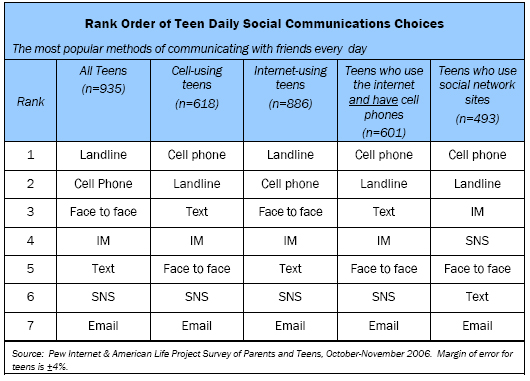 It is important to note, too, that text-based, face-to-face, and telephonic communications with friends are not mutually exclusive. Fully 74% of teens engage in two or more of these communications activities on a regular basis (defined here as more than once a week). 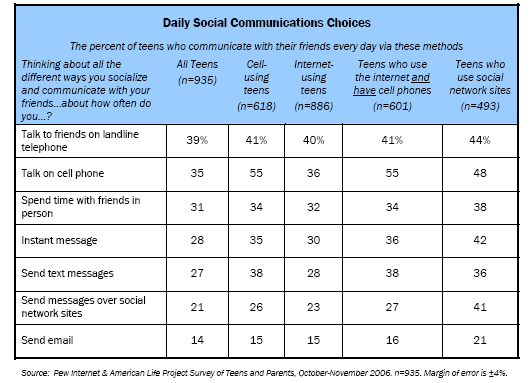 “Multi-channel teens” who have many communications options are a breed apart.

The youth ages 12-17 who say they are active in all the communications realms we probed have a distinctly different profile from other teens. Multi-channel teens – those who have mobile phones and internet access, send text messages and instant-messages, and use social network sites – have many pathways to contact their friends. This group constitutes a bit more than a quarter (28%) of all the teens in our sample. They are older than the full sample and more likely to be girls. Socioeconomic status and race or ethnicity differences are not statistically significant for this group. 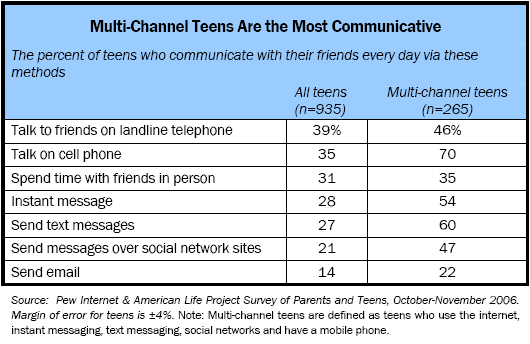 These highly wired and connected teens are notable for the intensity with which they use connective technologies, layering new technologies over old, while sustaining an overall higher likelihood of daily use of all technologies. Multi-channel teens are most likely to use their cell phones to reach out to friends and then turn to internet tools – instant messaging and social networking site tools. They are even more likely to use email than the general population of teens, though for them, as for the rest of the online teen population, email is the least popular communications choice.

Across the spectrum, the communication activity that changes the least is the frequency of face-to-face encounters; 31% of all teens have this kind of interaction with friends every day outside of school; 34% of cell phone owners do so; 35% of multi-channel teens have such encounters; and 38% of social network site users have in-person meetings with friends every day.

Email continues to lose its luster among teens.

Despite the power that email holds among adults as a major mode of personal and professional communication, it is not a particularly important part of the communication arsenal of today’s teens when they are dealing with their friends. According to focus group findings, email is falling into disfavor because teens have so many other options that allow immediate contact when they are away from computers, and because when they are on computers there are particular features of instant messaging and social network sites that make them more appealing ways to communicate. Said one high-school-aged girl, “Email is becoming obsolete. MySpace is so much quicker. It’s like text messaging on your phone. You can send pictures.”

Just 14% of all teens report sending emails to their friends every day, making it the least popular form of daily social communication.  Younger online girls are the exception; 22% of girls ages 12-14 email friends daily, compared with 11% of younger boys and 13% of older teens. When compared with the number of teens who report talking to their friends every day by instant message (28%) and with a cell phone (35%), the amount of daily email use is small. 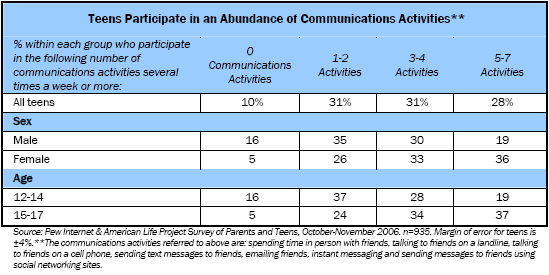 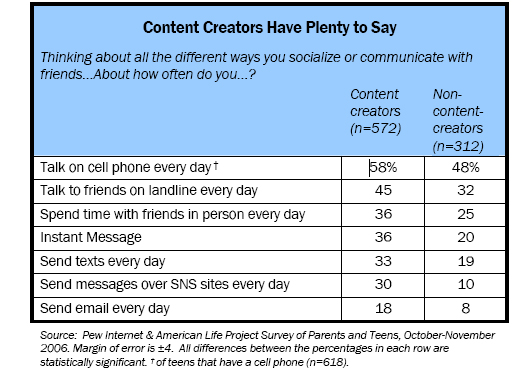 Social network users are also more likely than non-social-networking users to talk to friends on a landline telephone on a daily basis, with 44% of social networking teens reporting such behavior compared to 34% of those without social network profiles. 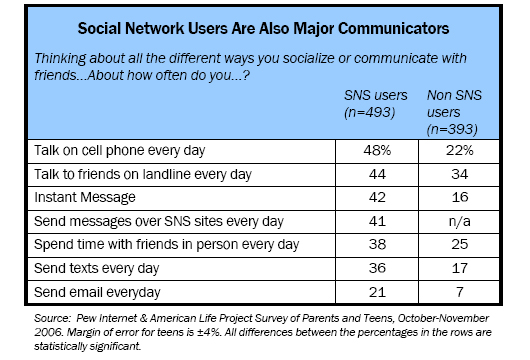