The use of social media – from blogging to online social networking to creation of all kinds of digital material – is central to many teenagers’ lives.

Some 93% of teens use the internet, and more of them than ever are treating it as a venue for social interaction – a place where they can share creations, tell stories, and interact with others.

The Pew Internet & American Life Project has found that 64% of online teens ages 12-17 have participated in one or more among a wide range of content-creating activities on the internet, up from 57% of online teens in a similar survey at the end of 2004.

The percentage of those ages 12-17 who said “yes” to at least one of those five content-creation activities is 64% of online teens, or 59% of all teens.

In addition to those core elements of content creation, 55% of online teens ages 12-17 have created a profile on a social networking site such as Facebook or MySpace; 47% of online teens have uploaded photos where others can see them, though many restrict access to the photos in some way; and 14% of online teens have posted videos online. The current survey marks the first time questions about video posting and sharing were asked.

Girls continue to lead the charge as the teen blogosphere grows; 28% of online teens have created a blog, up from 19% in 2004.

The number of teen bloggers nearly doubled from 2004 to 2006. About 19% of online teens blogged at the end of 2004, and 28% of online teens were bloggers at the end of 2006. Overall, girls dominate the teen blogosphere; 35% of all online teen girls blog, compared with 20% of online teen boys. This gender gap for blogging has grown larger over time. Virtually all of the growth in teen blogging between 2004 and 2006 is due to the increased activity of girls. Older teen girls are still far more likely to blog when compared with older boys (38% vs. 18%), but younger girl bloggers have grown at such a fast clip that they are now outpacing even the older boys (32% of girls ages 12-14 blog vs. 18% of boys ages 15-17).

The growth in blogs tracks with the growth in teens’ use of social networking sites, but they do not completely overlap.

Online boys are avid users of video-sharing websites such as YouTube, and boys are more likely than girls to upload.

Online teen boys are also twice as likely as online teen girls to post video files (19% vs. 10%). Not even older girls – a highly-wired and active segment of the teen population – can compete with boys in this instance; 21% of older boys post videos, while just 10% of older girls do so.

Digital images – stills and videos – have a big role in teen life. Posting them often starts a virtual conversation. Most teens receive some feedback on the content they post online.

Teen video posters report a similar incidence of receiving comments when they post videos online; nearly three-quarters (72%) of video posters report that they get comments at least sometimes. A little under half (48%) of posters say that people “sometimes” comment on their video postings. Another quarter (24%) say that people comment on their online videos “most of the time.” A similar number (27%) say that they “never” get comments on posted videos.

Comments and online conversation around content aren’t limited to images or videos posted online. As mentioned above, three-quarters (76%) of teens who use social networks say they comment on blog posts written by others.

In the midst of the digital media mix, the landline is still a lifeline for teen social life. Multi-channel teens layer each new communications opportunity on top of pre-existing channels.

Communications patterns among teens are shifting as their array of options grows. For the entire population of those ages 12-17, phone conversations and face-to-face meetings are the most frequently chosen ways to communicate with friends outside of school. But multi-channel teens – those teens who use the internet, instant messaging, text messaging a cell phone, and social networking sites – are more likely to turn to cell phones and digital media when communicating with friends. These multi-channel teens are super communicators who will use any tool at their disposal, but cell phones, instant messaging applications, and social networking channels rank higher in the panoply of their communications choices when compared with landline and face-to-face communication outside of school. 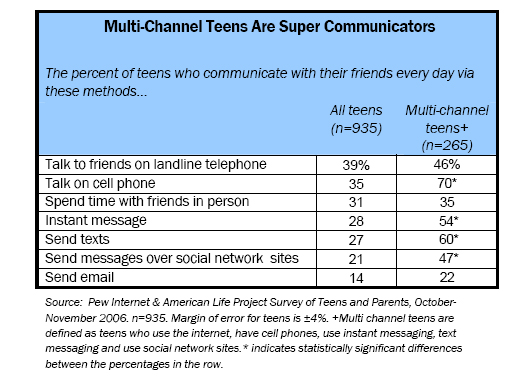 Despite the power that email holds among adults as a major mode of personal and professional communication, it is not a particularly important part of the communication arsenal of today’s teens. Only 14% of all teens report sending emails to their friends every day, making it the least popular form of daily social communication on the list we queried. Even among multi-channel teens, who are more likely to take advantage of any communication channel they have access to, just 22% say they send email to their friends daily. 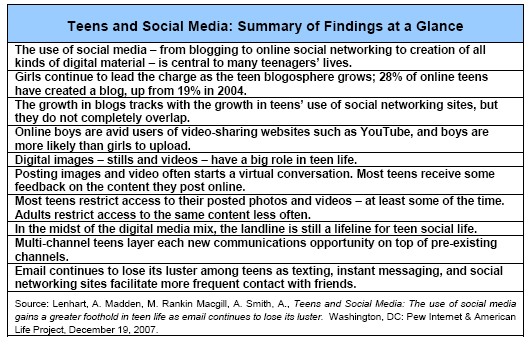