Productivity Enhancers happily get things done with information technology, at home and at work. But they don’t often stray into the world of interactive and mobile media.

Like Lackluster Veterans, Productivity Enhancers have been online a long time and have folded internet use into their lives. Unlike Lackluster Veterans, this adoption of modern information gadgetry has been met with their strong approval. With high-speed connections available at home and work, with feature-filled cell phones, Productivity Enhancers believe that ICTs give them an edge – in doing their jobs, keeping up with family and friends, learning new things, and overall personal productivity.

This posture toward communication technology leaves less room for user-generated content, so it is not too likely that a member of this group will blog, although some do share their creations on the Web. This distinguishes Productivity Enhancers from Omnivores and Connectors, who are far more likely to do activities relating to user-generated content, as well as other leading edge online activities such as downloading podcasts or downloading music and video.

Productivity Enhancers have a similar portfolio of tech assets as Lackluster Veterans, but they differ in that they have a greater capacity for mobile access. A vast majority have desktop computers (89%) and half (49%) have laptop computers; the latter figure is slightly more than Lackluster Veterans and nearly twenty percentage points higher than the norm. Nearly one in five have PDAs (18% do versus the 11% average). Fully 94% have cell phones, and most of these cell phones are equipped for email (54%) and surfing the net (59%). Home broadband penetration is high for this group (71%) and nine in ten (88%) have broadband access at home or work.

Productivity Enhancers are frequent internet users – especially at work. Fully 84% go online on the typical day, and two-thirds (67%) say they log on several times a day at work. That is the highest figure of any group in the typology. Consistent with their business-like posture toward use of ICTs, 29% say they go online on a typical day just for fun or to the pass the time. That is basically the average for the sample, but much lower than the figures for the prior three tech-oriented groups. Although they are more likely than average to have ever logged onto the internet with a wireless device (38%), they below average for “new media” activities such as downloading video or audio. 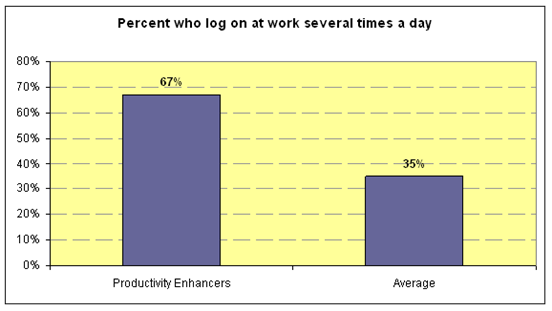 As noted, their task-oriented approach to information technology seems to crowd out deep participation in the online commons in the sense of contributing much in the way of their own creative material. They are at the average in terms of ever having tried any of the activities pertaining to user-generated content (39% have tried one of them). A Productivity Enhancer is half as likely to have a blog as average. At best, a Productivity Enhancer might post a personal creation, such as a photo, online; 18% have done that.

Productivity Enhancers have highly positive views on how the internet helps them with their lives. Nine in 10 (89%) say they like the fact that ICTs make them more available to others – that’s nearly twice the average and the highest of any group in the typology by an eleven percentage point margin. The same pattern emerges when focusing on perceptions of how ICTs matter for productivity. Fully 83% agree with the proposition that information technology helps them be more productive. This compares with the average of 33% and, again, it is the highest figure for any group by an eleven percentage point margin. 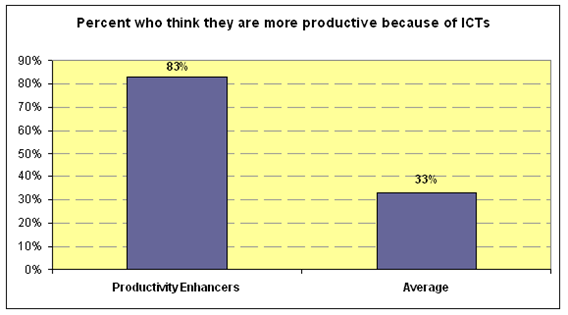 These positive attitudes add up to a strong sense among Productivity Enhancers that information technology would be hard to give up. Some 60% said it would be very hard to do without their cell phones, 59% said this about the internet, and 51% said this about email. All these numbers are well above average and the figure for cell phones trails only Omnivores across all the groups in the typology.

Productivity Enhancers are equally like to be men as women, and the typical member of this group is 40. He or she has been online for about ten years, and 76% are employed fill time. Nearly half are college graduates (47%), 14% are English-speaking Hispanics, and have incomes above the average. They are 8% of the general adult population.

A Typology of Information and Communication Technology Users Acknowledgements A Portrait of Information Technology Adoption Omnivores Connectors Lackluster Veterans
Productivity Enhancers
Productivity Enhancers happily get things done with information technology, at home and at work. But they don’t often stray into the world of interactive and mobile media.AssetsActivitiesAttitudesDemographics
Mobile Centric Connected but Hassled Inexperienced Experimenters Light but Satisfied Indifferents Off the Network Demographic Differences across Groups Appendix Methodology