The vast majority of teens and their parents believe that use of the internet helps students in the classroom and in their studies, but some teens believe too many of their peers use the internet to cheat

The internet is an important element in the overall educational experience of many teenagers.  Schools are a common location where online teens access the web, although very few online teenagers rely exclusively on their school for that web access.  Further, there is widespread agreement among teens and their parents that the internet can be a useful tool for school.  However, 37% of teens say they believe that “too many” of their peers are using the internet to cheat. And there is some disagreement among teens and their parents about whether children must be web-literate by the time they begin school.  Additionally, large numbers of teens and adults have used the web to search for information about colleges and universities.

The results reported here were gathered through telephone interviews conducted by Princeton Survey Research Associates for the Pew Internet & American Life Project between October 26 and November 28, 2004, among a sample of 1,100 parent-child pairs. Teens in these surveys are young people between the ages of 12 and 17. For results based on the total parent or teen sample, one can say with 95% confidence that the error attributable to sampling and other random effects is +/- 3%. For results based on online teens or online parents, margin of sampling error is +/- 4%.

For a growing portion of the online teen population, schools have become an important venue for internet use for a significant number of teens. About one in five online teens (18%) who use the internet from multiple locations list school as the location where they go online most often.  This figure is up from 11% in December 2000.

Still, while these figures suggest greater internet penetration and use in schools, they also show that 32% of all teens do not use the internet at school at all, despite the fact that 99% of public schools have access to the internet.1 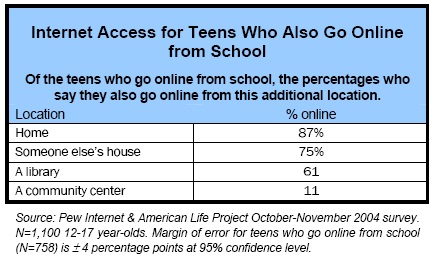 Just 13% of teens who connect to the web from school do not also have web access at their home.  These teens tend to be online much less often than all online teens who have access from home and school.  Twenty-eight percent of teens who go online at home and school report going online several times a day and 28% go online about once a day.  Of the teens who go online at school and not from home, only 7% say they go online several times a day and 15% say they go online about once a day.  While school can be a location that allows teens to get access to the web when they do not have access as readily elsewhere, those teens with online access at home are able to go online much more frequently.

Views about the internet, school, and cheating

There is an even more substantial difference in opinion between parents and teenagers about the need for children to use the web by the time they have started school.  One-quarter of teenagers agreed that if a child is not using the internet by the time they start school, they will fall behind their peers while 44% of parents believed the same thing.  While most parents and teens view the internet as a helpful academic tool, parents are more likely to believe that children must be familiar with the web by the time they start school.

Three-quarters of online teens use instant messaging – that represents close to 16 million youth. Of those 16 million, 78% say they use IM from time to time to talk about homework, tests or schoolwork. Online girls are more likely than online boys to do this, and older girls (those ages 15-17) are the most likely of all to do this. Teens with broadband connections at home are more likely than dial-up internet users to use IM this way.

Use of the internet to search for colleges and other schools

The internet is a common tool that many teens use to search for information on colleges or other schools.  Fifty-seven percent of online teens have gone online to get information about a college, university, or other school they were thinking about attending.  Our November 2004 survey of adults showed that 45% of online adults have done the same thing.  Among teens, girls are more likely to search for schools on the internet than boys, 61% to 53%.  The likelihood that a teenager has searched online for school information increases with age.  About a quarter (27%) of 12-year-old internet users have done this, compared with 85% of 17-year-old internet users.  There is no significant difference between the percentages of teens who have looked for such information with dial-up connections and those with broadband connections.

Next: Parents & Teens 2004 Survey
← Prev Page
You are reading page1Page2
Next Page →