College Students and the Web

RE: College students and the Web

The accompanying tables and charts were built using the data provided by comScore.

Please note that site-specific data in these tables, do not refer to the most “popular” Web sites for college students. Rather, the data show the kinds of sites where unusually large proportions of college students make up the traffic.

Please attribute these data to “comScore Media Metrix,” which is a division of comScore Networks.

The table below shows large sites at which the percentage of college student Web traffic is much higher than would be “normally” expected, given the overall size of the online college audience compared to other users of the Internet. Somewhat expectedly, the university audience gravitates toward entertainment, society and community. Some highlights: 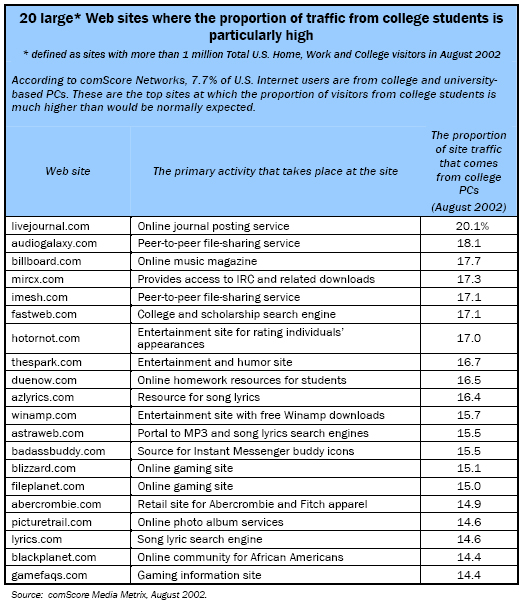 With lifetimes of buying power and potential brand loyalties ahead of them, college students are of great interest to many marketers – including those online. The next table shows e-commerce sites where the college audience is much higher than would be “normally” expected, given the overall size of the online college audience compared to other users of the Internet.

The university audience is often associated with its craving for music, movies and fashion. Not surprisingly, the top 20 shopping Web sites with the highest percentage of college visitors cater strongly to those three desires. Seven of the top 20 Web sites focus on apparel, four focus on movies and event tickets, and three are music related. Other popular sites focus on posters and artwork, video games and consumer electronics. 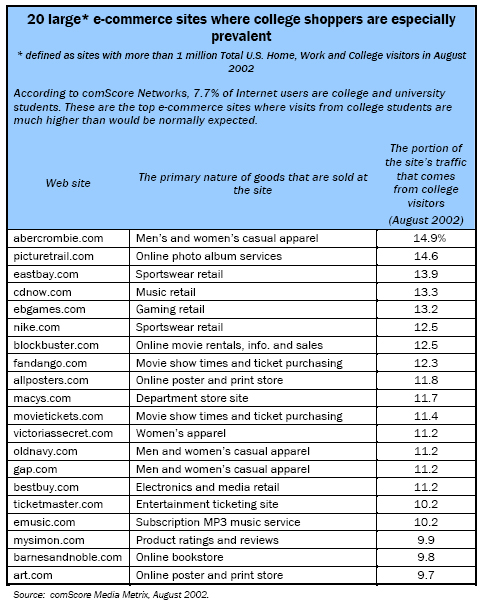 The next table shows the spending on merchandise and services where college students’ share of the spending was relatively high, compared to other kinds of e-shoppers. comScore Networks reports that in 2001, $53.1 billion worth of merchandise and services were bought online at U.S. sites (excluding auctions and corporate purchases) by buyers from around the world. The vast majority (85%) of these purchases were made by U.S. buyers, of which college students accounted for 4.3%. Thus, this table shows the e-commerce categories where college-student spending was equal to or greater than their overall share of the e-commerce market. 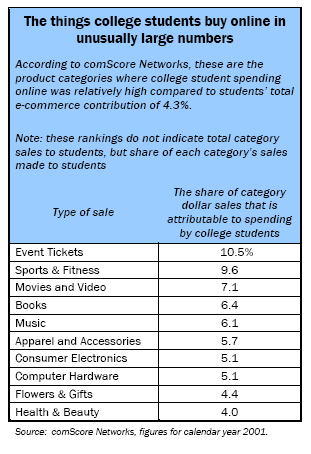 Looking at sales in the most recent month, several online merchandise categories had significant spending increases in August 2002 versus August 2001 – no doubt driven partly by students’ return to college. Event Ticket sales were $161 million dollars, up 63 percent versus one year ago; and Movies and Video sales were $82 million, up 61 percent. This comes as no surprise, given that event-ticket sites are among the most highly trafficked by the college audience, as mentioned above. Office Supplies and Stationery posted $540 million, up 59 percent; and Computer Hardware sales were $946 million, up 35 percent. 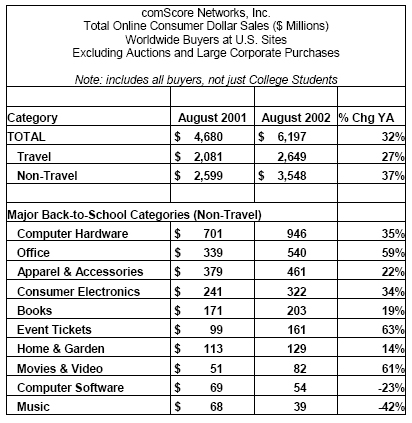 The material in the chart below demonstrates to a modest degree that some things about college life may never change. Students are still night owls – at least compared to other people. The chart shows that higher proportions of college students (labeled here as “school” users) are online between midnight and 4 a.m. than other Internet users. 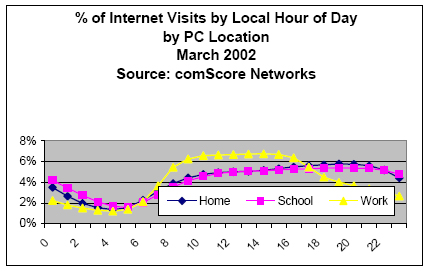 The raw data are here: 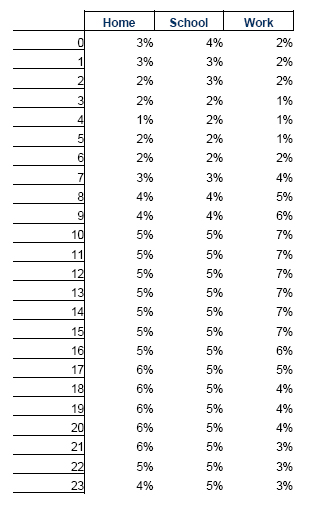 College Students and the Web