The Great Recession of 2007-09 triggered a lengthy period of decline in the incomes of American workers. Since hitting a trough stretching from 2012 to 2014, their financial fortunes appear to be on the mend – in 2017, a decade after the recession began, the median personal income of American workers stood 3% higher than in 2007.1

On the surface, a similar recovery appears to be underway for Latino workers.2 Their median personal income rose 5% from 2007 to 2017. But the overall gain masks a sharp contrast in the experiences of U.S.-born Latinos – whose incomes in 2017 were 6% less than in 2007 – and of foreign-born Latinos, whose incomes were 14% higher than in 2007, according to a new Pew Research Center analysis of government data.

Demographic change, not the economic recovery, is the major driver of the gains for Latino immigrants. A slowdown in Latin American immigration led to a steep rise in the share who have lived in the United States for at least 10 years. Longer-tenured immigrants earn more than the typical immigrant, and their rising share gave a sizable boost to the average income of foreign-born Latinos. U.S.-born Latino workers – younger and less educated than U.S.-born workers overall – experienced greater losses in the recession and are left wanting in the economic recovery, despite recent gains.

Trends in the incomes of Hispanics 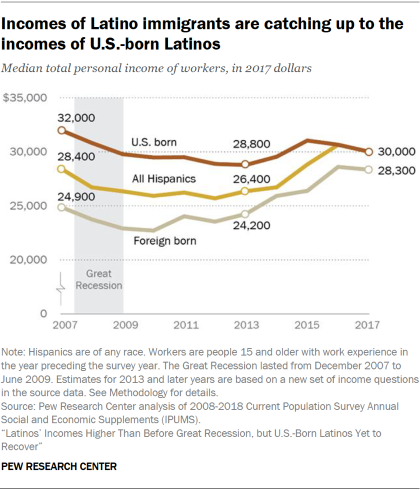 The incomes of Hispanic workers fell for several years following the Great Recession, reached bottom in or around 2013, and then took the path to recovery seen by American workers overall. The median personal income of Hispanic workers stood at $28,400 in 2007, at the cusp of the recession. By 2013, their median income had fallen to $26,400, a loss of 7%. A quick rebound followed this period of loss, and the median income of Hispanics rose to $30,000 by 2017 – a gain of 14% from 2013 to 2017, sufficient to make up for the recession-induced loss (incomes expressed in 2017 dollars).

The fact that the incomes of U.S.-born Latinos remain below pre-recession levels is not because their economic recovery in recent years has lagged the recovery for others. Indeed, the median personal income of U.S.-born Hispanics increased 4% from 2013 to 2017, the same as the increase for U.S.-born workers overall. But these gains left U.S.-born Hispanics shy of a complete recovery from the Great Recession because they experienced greater financial losses in the economic downturn.

A key factor in the markedly better financial experience of foreign-born Latinos is the slowdown in the inflow of Latino immigrants, especially from Mexico. This sparked a major demographic shift – a sharp increase in the share of Latino immigrant workers who have lived in the U.S. for at least 10 years. As a result, Latino immigrants today, compared with 10 years ago, are older, more experienced workers who have spent significantly more time assimilating into the U.S. labor market. This demographic shift played a role in limiting financial losses during the Great Recession and boosting gains in recent years.

The deceleration in Latino immigration is related to the onset of the Great Recession. In the decade leading up to the recession, the number of foreign-born Latinos in the U.S. labor force increased by 50%, from 7.8 million in 1998 to 11.6 million in 2008, and immigrants accounted for a majority of the growth in the Latino labor force over this period. In the 10 years since 2008, the number of foreign-born Latino workers increased by only 15%, to 13.4 million in 2018, and the U.S. born accounted for more than seven-in-ten new Latino workers (see Methodology for the choice of dates).

The slowdown in Latino immigration is largely attributable to a decline in the inflow of unauthorized workers. In 1995, there were 2.6 million unauthorized Latino immigrants in the labor force, according to Pew Research Center estimates. The number peaked at 6.4 million in 2008 and subsequently fell to 5.9 million by 2016 (the latest year for which estimates are available). As a result, the share of the foreign-born Latino workforce in the country without authorization fell from 49% in 2008 to 44% in 2016. 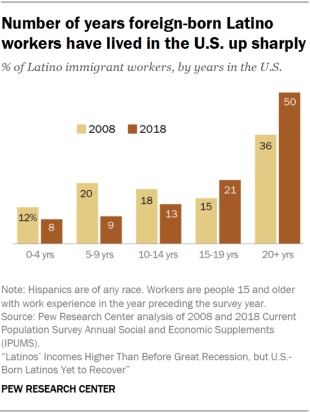 The reduced share of unauthorized immigrants among Latino workers is akin to a selective withdrawal of lower-income workers from the workforce. This drawdown had a direct, albeit small, effect on the average income of Latino immigrants. The mean income in 2007 of Latino workers in the U.S. without authorization is estimated to be about 70% of the income level of Latino immigrants in the country legally, in part due to differences in education levels. Given that their incomes are lower, the 5-percentage-point decrease in the share of unauthorized workers from 2008 to 2016 alone would have raised the average personal income of Latino immigrants overall by about 2%.

This demographic shift resulted in a significant upward drift in the personal incomes of Hispanic immigrants. In 2007, the median income of Hispanic immigrant workers ranged from $19,000 for those in the U.S. less than five years to $31,200 for those in the U.S. at least 20 years. Even if the incomes of individual immigrants remained fixed at their 2007 levels, their average income would be 7% higher in 2017 due to the rise in the shares of workers who have lived longer in the country. 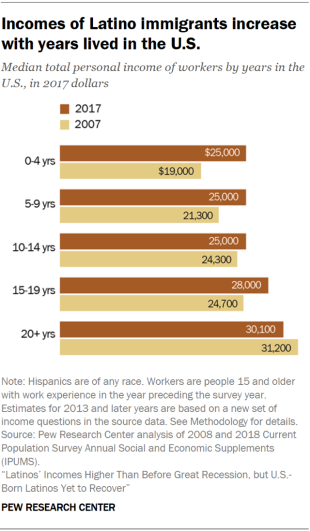 Trends in the incomes of whites, blacks and Asians

The slowdown in immigration that lifted the median income of Hispanics did not carry the same significance for other racial and ethnic groups. Only 5% of white workers were foreign born in 2018, compared with 4% in 2008. Among black workers, the share who were foreign born was 14% in 2018, compared with 11% in 2008. Because foreign-born workers make up small shares of white and black workers, changes in their incomes did not have a sizable impact on the changes in incomes for white and black workers overall.

Immigrants do play a large role in the Asian workforce, more so than among Hispanics, but there has not been a slowdown in immigration among Asians or a notable shift in their demographic composition. The share of Asian workers who are foreign born is relatively high, standing at 71% in 2018, compared with 74% in 2008. During this 10-year period, the number of Asian immigrant workers in the U.S. increased 36%, about the same as the 37% increase in the 10 years prior, from 1998 to 2008. Also, there was little change in the distribution of Asian immigrant workers by years in the United States. In 2018, 26% had lived in the U.S. for less than 10 years, compared with 29% in 2008, and the share who had lived in the U.S. for 20 years or more also changed modestly, from 41% in 2008 to 46% in 2018.