During the first 18 months of the Donald Trump presidency, an increased number of Hispanics see a worsening situation for themselves and Hispanics overall, as well as an erosion of their optimism about the future financial well-being of their children. This is particularly true for foreign-born Latinos, especially those who are not U.S. citizens. Latino views of their place in America and their personal finances have also declined in recent years.

At the same time, however, a large majority of Hispanics say they are proud to be both Hispanic and American, and they continue to see the U.S. as a land with better opportunities than their country of origin. Among Hispanics born in other countries or Puerto Rico, a large majority would make the move to the mainland U.S. all over again, given the opportunity to do so.

More worry about their place in America, especially immigrants

The share of those concerned is up and the share who express confidence is down in 2018, compared with a survey taken in January 2017, before Trump took office. At that time, 41% of Latinos said they were concerned about their place in America while 54% said they were confident about it.

This growth in worry about their place in America is driven by a rise in concern among immigrants, those with no college education and independent voters who do not identify with or lean toward either the Republican or the Democratic parties.

In 2018, Latinos most concerned about their place in America are foreign born. Among immigrant Latinos, 57% say they are concerned, compared with 42% of those born in the U.S. Of the foreign born, those who are not U.S. citizens and do not hold a green card have the most concern, compared with Latino immigrants who are U.S. citizens and those who are lawful permanent residents.

Rising share say situation of Hispanics in the U.S. is worsening 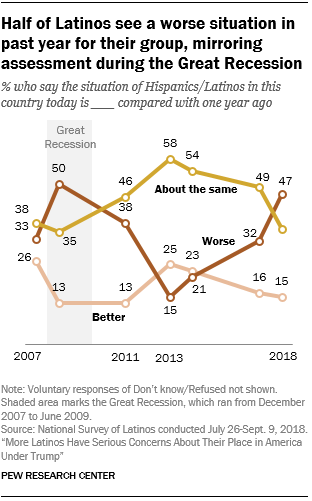 In the past five years, the share of Hispanics who see the state of U.S. Hispanics worsening has grown dramatically and now rivals the negative views expressed in 2008, during the Great Recession.

Nearly half (47%) of Hispanics say the situation of U.S. Hispanics is worse than it was a year earlier, up sharply from 15% in 2013. This change in views is more dramatic among some groups of Hispanics: Democrats, women and those with at least a high school education.

The views among Hispanic women about the situation of Hispanics in the U.S. have also grown sour in the past five years, more so than among Hispanic men, though such sentiment is up in both groups. 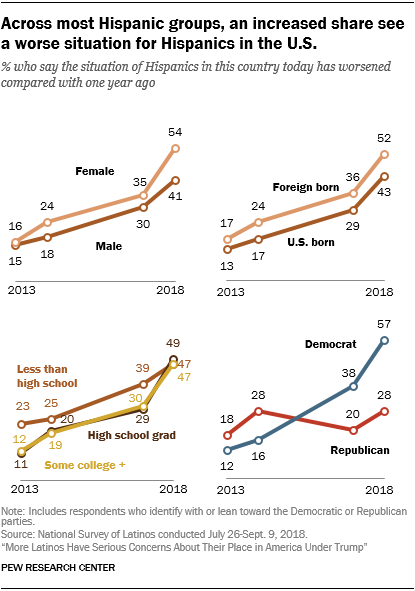 Life in the U.S. as a Latino

For their part, Latino Democrats (61%) are twice as likely as Latino Republicans (30%) to say it has become more difficult to be Latino in the U.S. in recent years. 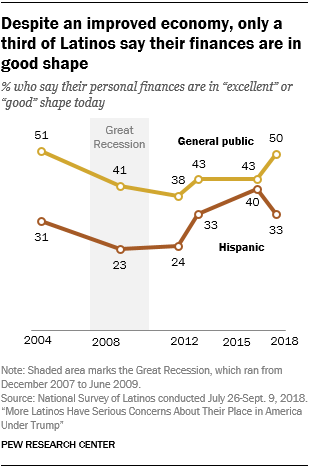 The U.S. economy has improved in recent years, Latinos’ household income is at a record high, unemployment among U.S. Latinos is at a record low and poverty levels among Latinos have dropped. Even so, Latino adults are more downbeat about their current financial situation today than they were three years ago, according to the new survey.

In 2015, 40% of Latinos said their personal financial situation was in “excellent” or “good” shape; today only 33% say the same. By contrast, assessments of personal finances are up among the general U.S. public.

The decrease in the share of Hispanics rating their personal finances as excellent or good in the past three years is greater among certain subgroups.

Hispanic men and women had similar ratings of their finances in 2015, but in 2018, women rated their situation lower. For their part, Hispanic young adults ages 18 to 29 used to rate their finances in a more positive light than older Hispanics three years ago (48% vs. 37%, respectively), but now their assessments resemble those of Hispanics ages 30 to 64 (33% vs. 32% respectively). From 2015 to 2018, positive financial ratings also fell among Hispanic Democrats but were stable for Hispanic Republicans. 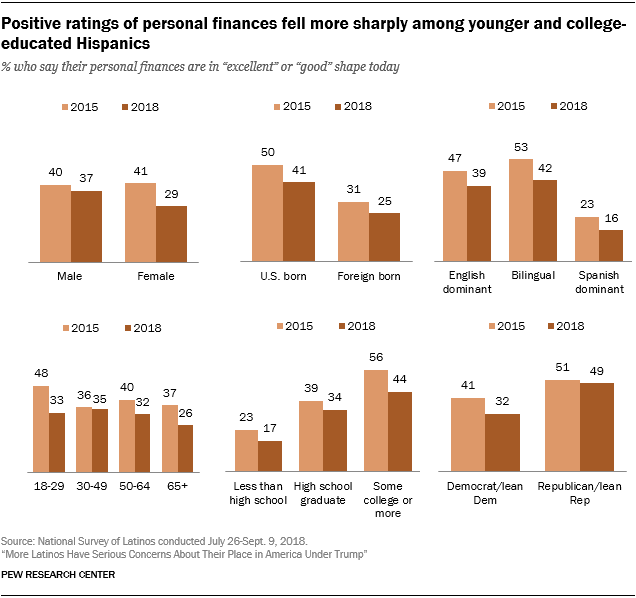 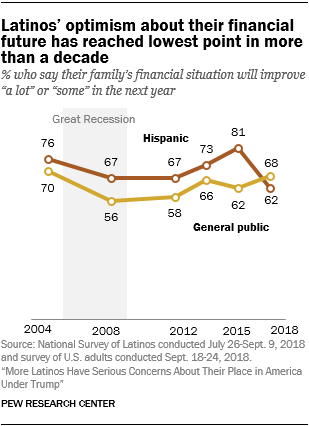 But perhaps a more remarkable change is the grim forecast Latino adults paint when looking into their financial future. Today, about six-in-ten (62%) say they expect their personal financial situation to improve in the coming year, down 19 percentage points from three years ago (81%) and at the lowest level recorded since the Center first asked this question in 2004. Even during the Great Recession, when finances of Latinos were doing poorly, about two-thirds of Latinos expected their personal finances would improve the following year.

This turn in attitudes is more notable as Hispanics’ views of their personal finances in the future have consistently been more positive than assessments among the general public. However, in 2018, members of the U.S. general public were more likely than Hispanics (68% vs. 62%) to say they expect their finances to improve in the coming year.

The drop in financial optimism observed in the past three years is larger among some subgroups of Latinos. They include immigrants and their U.S.-born children, those with lower levels of education and Democrats. By contrast, financial optimism remained mostly unchanged among Republican Latinos. 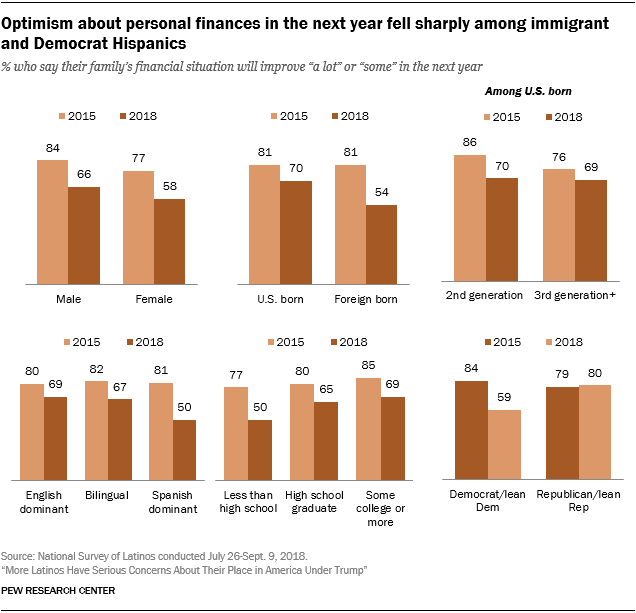 The downcast view of their own financial future extends to that of their children. Today only 54% of Latinos say they expect their children will be better off financially than themselves, a sharp reduction from 72% who said the same in 2015.

The reduction in optimism for the financial well-being of their children is larger among some Hispanics, especially those without college education, immigrants, those third generation or higher, naturalized U.S. citizens and women. 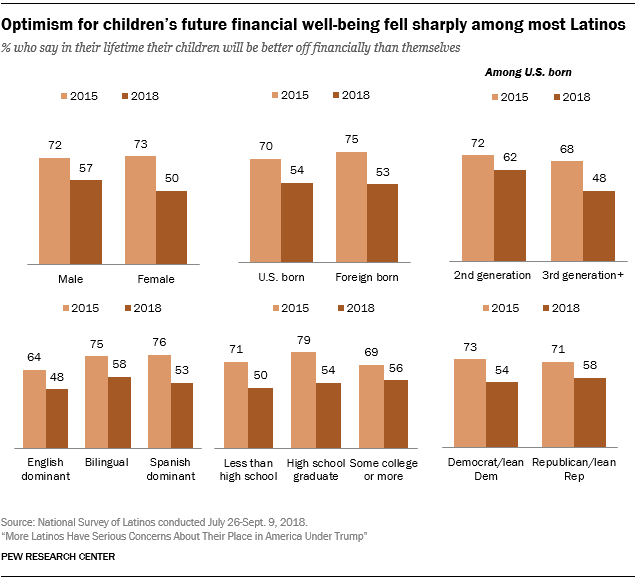 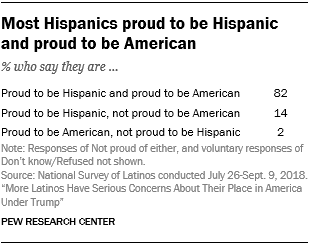 Compared with 2011, when the question was last asked, the share who say they would come to the U.S. again is down, while the share saying they would move to a different country is up. 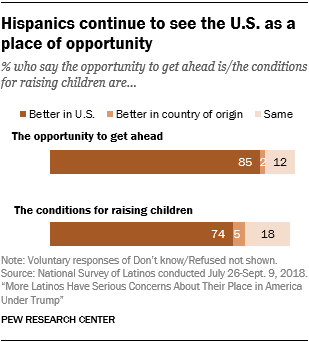 When asked to assess how the U.S. compares with their country of origin, 85% of Hispanics say the opportunity to get ahead is better in the U.S., with similar shares among those who immigrated to the U.S. and those who were born here. Similarly, about three-in-four (74%) Hispanics say the conditions for raising children are better in the U.S. than they are in their country of origin. In both instances, opinions are unchanged since 2011 when the question was last asked.

Next: 2. Latinos and discrimination
← Prev Page
Page1You are reading page2Page3Page4Page5Page6Page7Page8Page9Page10Page11
Next Page →

More Latinos Have Serious Concerns About Their Place in America Under Trump
1. Latinos have become more pessimistic about their place in America
More worry about their place in America, especially immigrantsRising share say situation of Hispanics in the U.S. is worseningLife in the U.S. as a LatinoLatinos have grown pessimistic about their finances despite an improved national economyHispanics are proud of their Hispanic identity – and proud to be American
2. Latinos and discrimination 3. Hispanics have become more dissatisfied with direction of U.S. 4. Views of immigration policy 5. Views of President Donald Trump 6. Hispanic voters and the 2018 midterm elections Acknowledgments Methodology Appendix A: References Appendix B: Additional table

Want to understand U.S. immigration? Weu2019ve got an email course for you