Hispanics are divided about what a Donald Trump presidency means for their place in America, according to a Pew Research Center survey of Hispanic adults taken before his inauguration. The survey also finds that a rising share believes the situation of U.S. Hispanics is worsening and that about half of Hispanics are worried about the deportation of someone they know. 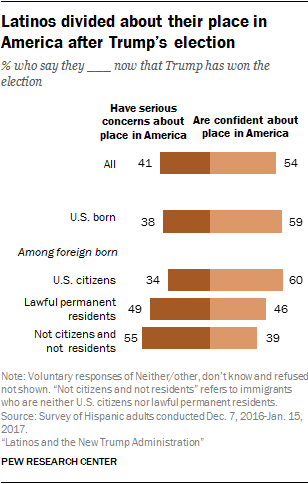 When it comes to progress for Hispanics as a group in the U.S., Hispanics are divided. Half (49%) say the situation of U.S. Hispanics today is about the same as it was a year ago, while 32% say it has worsened and 16% say their group’s situation has improved. 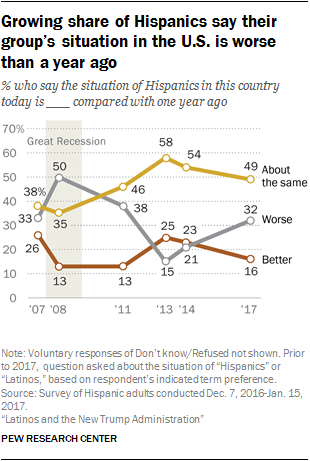 These findings emerge from a new, nationally representative bilingual telephone survey of 1,001 Hispanic adults conducted from Dec. 7, 2016, through Jan. 15, 2017, on landline and cellular telephones by SSRS for Pew Research Center. The survey’s margin of error for the full sample is plus or minus 3.6 percentage points at the 95% confidence level. 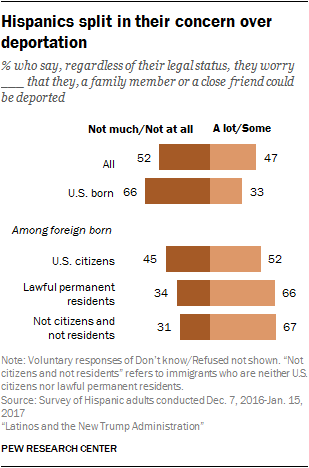 The U.S. Department of Homeland Security this week issued new immigration enforcement policies that widen the pool of unauthorized immigrants prioritized for deportation to include those who have committed an act that will result in criminal charges, those charged with a crime but not convicted, and those convicted of a criminal offense regardless of severity, among other things.2 In recent weeks, immigrants around the nation have grown concerned about stepped-up deporations under the new administration.

According to the new survey, which was taken before Trump’s inauguration and the reported rise in deportration concerns, Hispanics are split in their concern about deportation. About half (47%) of Hispanic adults, regardless of their immigration status, say they worry “a lot” or “some” that they themselves, a family member or a close friend, could be deported, while 52% say they are worried “not at all” or “not much.”

Deportation concerns among Hispanics are little changed from 2013, when 46% of Hispanics said they worried, and is down from 52% in 2010. Overall, all major subgroups of Hispanics have seen a decline in their worry about deportation or no change in recent years. For example, in 2010, 84% of Hispanic immigrants who were not U.S. citizens and not lawful permanent residents said they worried a lot or some that they or someone close to them could be deported, about 17 percentage points higher than today. Meantime, the share of U.S.-born Hispanics who said the same in 2010 was 32%, similar to today’s 33%.

Top priorities for the new administration and Congress in 2017 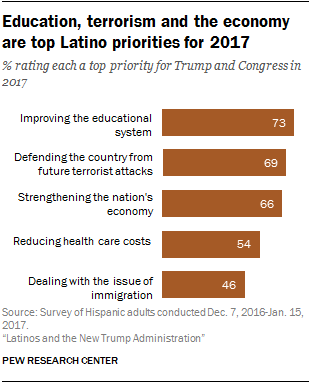 Despite the prominence of immigration issues in last year’s presidential campaign, U.S. Hispanics do not rate them a top issue for the new administration or Congress, a pattern similar to that found in previous years of polling by Pew Research Center. According to the new survey, 46% say dealing with the issue of immigration should be a top priority for the new administration and Congress in 2017, ranking last among the five priorities tested in the new survey.

Instead, Hispanics identify education as a top priority issue for the new Trump administration and for the new Congress among those tested. Fully 73% say improving the educational system should be a top priority in 2017. Other top priorities include defending the country from future terrorist attacks (69%) and strengthening the nation’s economy (66%). Following these three issues is reducing health care costs (54%).

This rating of issue priorities among Latinos is similar to that of the U.S. general public, though there are some differences. According to a recent Pew Research Center survey of U.S. adults, defending the country from terrorism (76%), strengthening the nation’s economy (73%) and improving the educational system (69%) are rated as the top three prirorities of more than 20 tested. On terrorism and the economy, the share of U.S. adults who rate these as top issues is higher than the share of Latinos who say the same. On reducing health care costs, 66% rate the issue as a top priority for Trump and Congress, again a higher share than among Latinos. Meanwhile, on immigration, 43% of U.S. adults say immigration is a top priority, a share similar to that of Latinos.

More broadly, this pattern for top issues among U.S. Latinos has been fairly consistent for a number of years in Pew Research Center surveys. In fall 2016, the top issues for Latinos were education, the economy and health care. And in December 2008, as President-elect Barack Obama prepared to take office for the first time, Latinos cited the economy, education, health care and national security as top issues for the new administration.3

Partisan differences in views of Trump and Obama 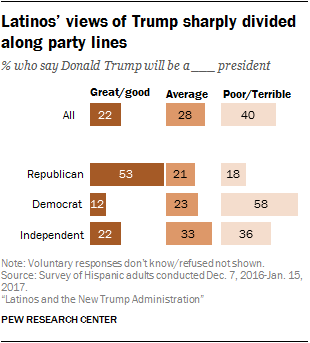 Latino views about the kind of president Trump will be and how former President Obama’s administration will be viewed splits along party lines. 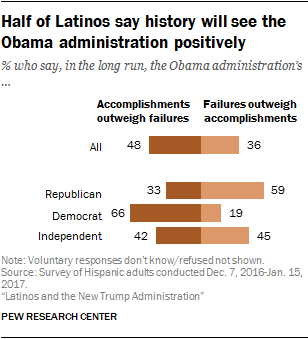 “U.S. born” refers to people who say they were born in the 50 states or the District of Columbia, Puerto Rico or other U.S. territories, and those born elsewhere to at least one parent who is a U.S. citizen.

“Foreign born” refers to people who say they were born outside of the United States or other U.S. territories to parents who were not U.S. citizens.

Next: 1. Latino priorities for the Trump administration and Congress in 2017
← Prev Page
You are reading page1Page2Page3Page4Page5Page6Page7Page8Page9
Next Page →